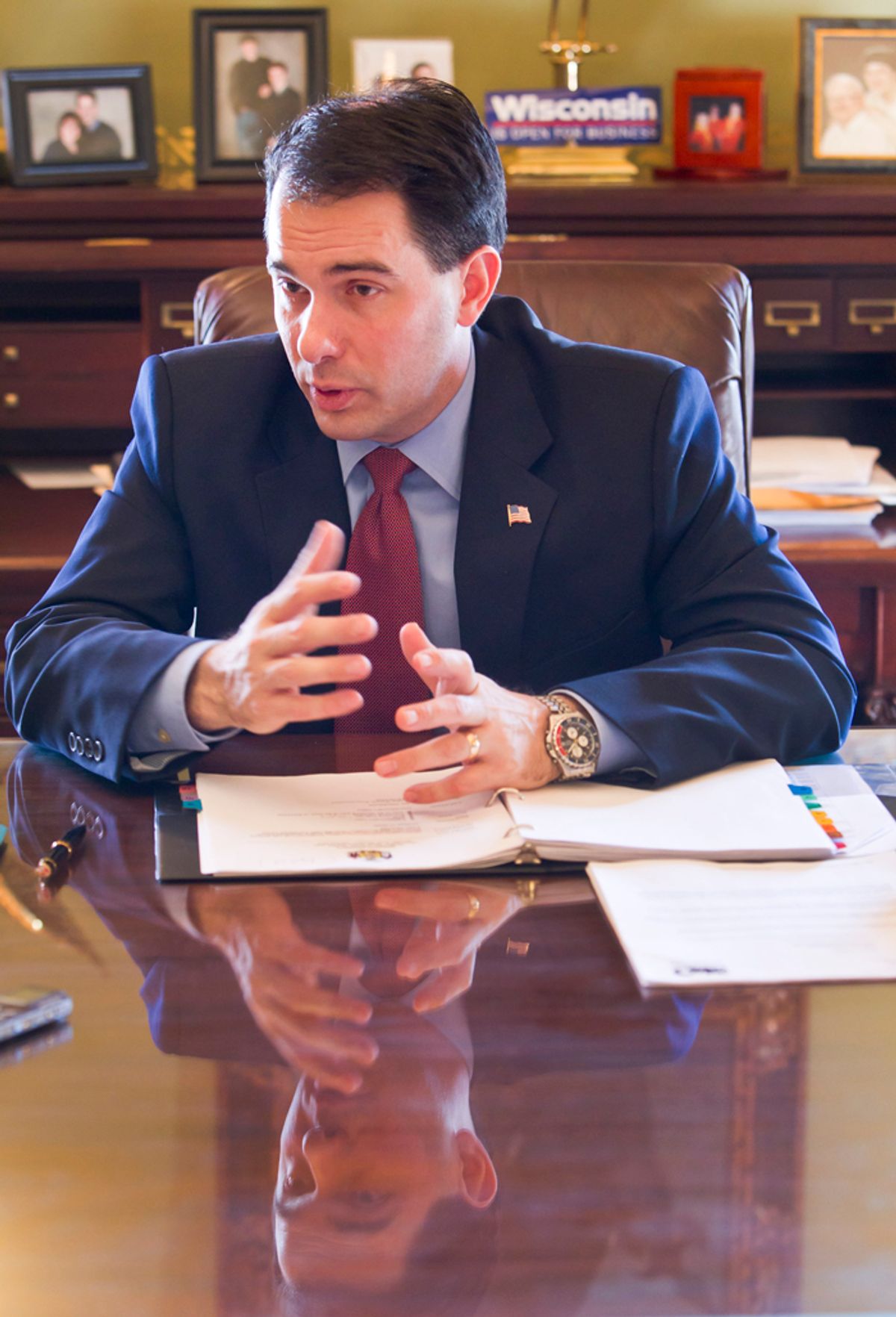 For whatever its form, this is really not a criminal case. It is but an episode in the great battle for human liberty, a battle which was commenced when the tyranny and oppression of man first caused him to impose upon his fellows and which will not end so long as the children of one father shall be compelled to toil to support the children of another in luxury and ease.

-- From the Final Argument of Clarence S. Darrow, in the case of the Woodworkers' Conspiracy

You could not ask for a better snapshot of the dire straits of the U.S. labor movement than the struggle currently going on between new Wisconsin Gov. Scott Walker and the state's public sector unions. Using the state budget deficit as an excuse, Walker, a Tea Party favorite, has proposed ending collective bargaining rights for most of the state's public sector workers. The governor made national news on Friday when he announced that the National Guard stood ready to deal with any disruptions that might result should state workers do something radical -- like, say, go on strike -- in protest of Walker's initiative.

That last move, which focused national attention on a dispute that had, until then, been mostly beneath the radar, may ultimately backfire. Republicans have majorities in both the state House and Senate but there appears to be some question now whether legislators are willing to go along with Walker's plan to alienate teachers, nurses and prison guards. (Firefighters, police officers and state troopers, incidentally, are exempt from Walker's decree, reports the Milwaukee Journal-Sentinel, possibly because the state trooper's union and Milwaukee firefighter and police unions endorsed Walker in his campaign for governor.)

Public sector unions are under assault all over the nation, as Republicans seize upon budget deficits that are largely the result of the recession to go after a long-hated foe. But here's what makes the Wisconsin story especially interesting -- or tragic. As Abe Sauer points out in a fascinating post at The Awl, Wisconsin was the first state to grant public sector workers collective bargaining rights. Then-Gov. Gaylord Nelson, a liberal icon who seems to be remembered now more for founding Earth Day than anything else, sponsored the law, following the example of New York City Mayor Robert Wagner, who had given municipal employees similar rights a year earlier. In 1962, President John F. Kennedy granted federal employees similar permission. And to cap it all off, the American Federation of State, County and Municipal Employees (AFSCME) -- the chief national union representing all non-federal public employees -- was founded in Wisconsin, all the way back in 1936.

The fact that the move to grant public employees collective bargaining rights came at the height of the labor movement's power in the United States is no accident. The goal of labor organizers was to give public sector employees rights and protections similar to those enjoyed by workers in the private sector. They probably did not foresee a future in which the private sector labor movement became so marginalized in the U.S. that anti-union conservatives would be able to stoke political resentment against public sector employees by charging that state employees were living large at taxpayer expense. Divide and conquer -- the strategy works every time.

But that it should be working so well in Wisconsin, a state that only last year was represented by one of the most stalwart of American liberals, Russ Feingold, has to be disconcerting for anyone who believes that strong union representation is crucial to a robust working and middle class, and that the growth of income inequality in the U.S. is correlated with the decline of the labor movement. Wisconsin's tradition of labor activism goes back much further than even 1936. One of the  landmark moments of U.S. labor history came back in 1898, when the great Chicago lawyer Clarence Darrow, then 41 years old, represented three Oshkosh, Wis., woodworkers against charges of conspiracy.

Adult male workers at the Oshkosh woodworking plants worked 10 to 12 hours a day for $1.10. Boys worked the same hours for 40 cents a day. They were paid irregularly. The workers went on strike to demand an end to child labor, a weekly payday, an increase in wages and recognition of their own organization.

A weekly payday! Imagine that.

Reading Darrow's 45-page final argument, which he delivered without notes in a seven-and-one-half hour display of rhetorical brilliance that reportedly "held the packed courtroom spellbound," is like journeying to an alternate reality, one in which appeals to humanity's better nature actually gained traction in the hearts of thinking men and women.

I take it that in a free country ... every person has the right to lay down the tools of his trade if he shall choose. Not only that, but in a free country where liberty of speech is guaranteed, every man has the right to go to his fellow man and say, 'We are out on strike. We are in a great battle for liberty. We are waging war for our fellow man. For God's sake, come with us and help.' "

Gentlemen, I leave this case with you; here is Thomas I. Kidd. It is a matter of the smallest consequence to him or to me what you do; and I say it as sincerely as I ever spoke a word. No man ever entered this struggle for human liberty without measuring the cost, and the jail is one of the costs that must he measured with the rest; and if you see fit to send him there, he will take his punishment like a man, and ask no odds of any human being on the earth. But, gentlemen, I do not appeal for him. That cause is too narrow for me, much as I love him and long as I have worked by his side. I appeal to you, gentlemen, not for Thomas I. Kidd, but I appeal to you for the long line -- the long, long line reaching back through the ages, and forward to the years to come -- the long line of despoiled and downtrodden people of the earth. I appeal to you for those men who rise in the morning before daylight comes, and who go home at night when the light has faded from the sky and give their life, their strength, their toil, to make others rich and great. I appeal to you in the name of those women who are offering up their lives, their strength and their womanhood on the altar of this modern god of gold; and I appeal to you, gentlemen, in the name of these little children, the living and the unborn, who will look at your names and bless them for the verdict you will render in their aid.

Gentlemen, the world is dark; but it is not hopeless...

The verdict, by the way, was not guilty.