Who wants a government shutdown? Everybody!

A perfect match: Tea Partyers are after street cred while Obama knows the political fallout will hurt Republicans 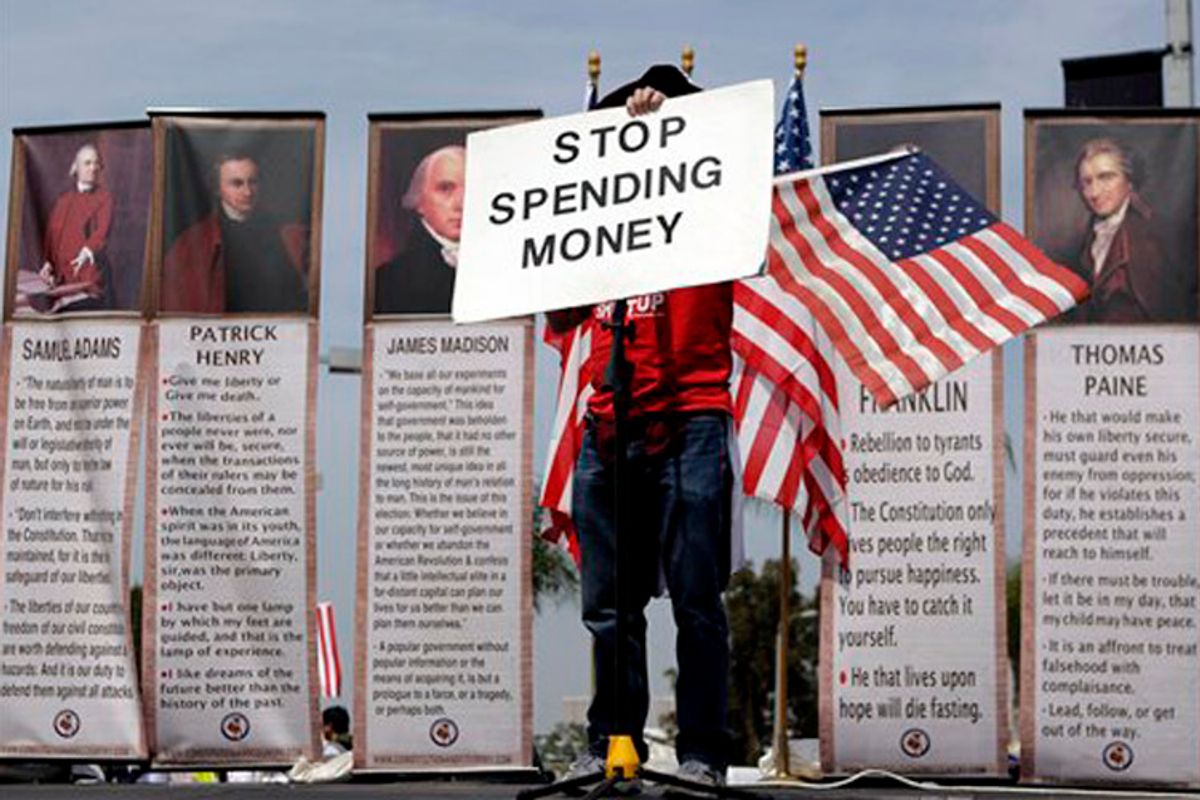 What do you get when you combine this...

If the President is presented with a bill that undermines critical priorities or national security through funding levels or restrictions, contains earmarks, or curtails the drivers of long-term economic growth and job creation while continuing to burden future generations with deficits, the President will veto the bill.

Linda Bilmes, a professor at Harvard's John F. Kennedy School of Government, led a budget seminar for nearly 40 House freshmen before the start of the new Congress.

She believes freshman conservatives are itching to make a dramatic statement by shutting down the government.

"It was clear there was a group of new members who in my mind were more concerned with making statements than working with their own leadership to solve the nation's problems," said Bilmes. "Nothing I've seen in the last week changes my mind."

Answer: A government shutdown, and sooner, rather than later.

Sixteen days remain before the current continuing resolution giving the U.S. government the authority to spend runs out. A sizable contingent of House Republicans actively want to shut down the government. If the above statement from the White House's Office of Management and Budget is any indication, President Obama might be inclined to grant their wish. And why not? History tells us that a shutdown forced by Republicans who refuse to compromise with the White House will be bad politics for the GOP.

According to budget wonk Stan Collender, even the House Republican leaders, who were forced last week by rebellious rank-and-file members to demand tougher cuts than are likely to pass muster in the Senate, and who also know that the politics of a government shutdown aren't good for Republicans, might need to go there anyway, just to teach their new Tea Party representatives a lesson.

As I've been saying for a while, the House GOP leadership may have to agree to a shutdown to show the Tea Party folks that they are willing to do it. They also need to show that the Republican Party will suffer real political pain from everyone but Tea Party supporters by shutting down the government.... [T]he inability of the House Republican leadership to temper its Tea Party types last week on the continuing resolution is as strong an indication as you can get that it needs additional leverage over that faction of its caucus and the likely negative political reaction to a shutdown may be the best/only way it can get it.

Sure is an interesting scenario, isn't it? All the players might actually desire a shutdown showdown, but only one stands to gain a real benefit. If Republicans pay the political price and Tea Partyers end up cowed, Obama would be the winner.