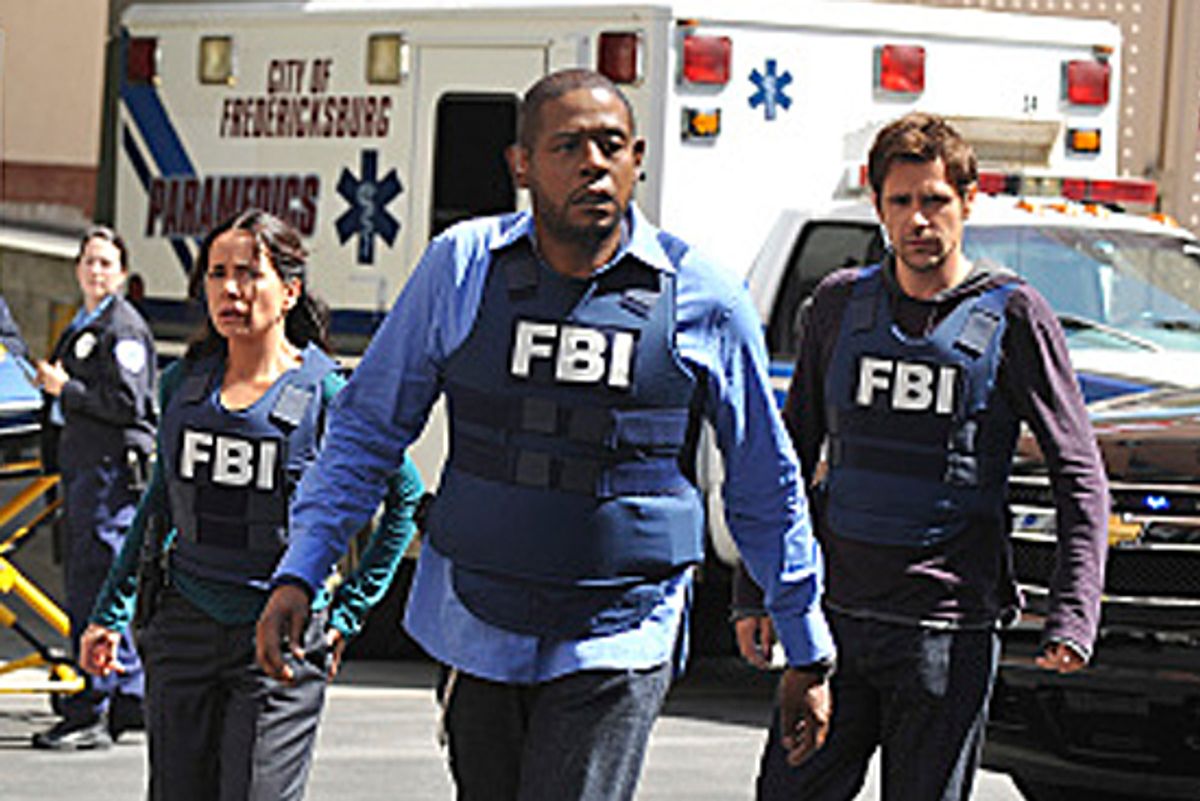 CBS should change its name to The Ministry of Fear. Look at the network's immensely successful prime time -- or crime time -- lineup. It's a factory cranking out shrink-wrapped tales of savage human monsters and the righteous public servants guarding us against them. "Criminal Minds," "CSI," "CSI: Miami," "CSI: New York," "The Mentalist, "48 Hrs. Mystery," "Flashpoint," "Hawaii Five-O," "NCIS" and "NCIS: Los Angeles" blur together in the brain. They're pages in a lurid catalog of kidnapping, rape, random assault, child molestation, passion killing, drug dealing, organ theft, sexual enslavement, and of course, serial murder. (Who builds all the TV serial killers' lairs, I wonder? Is there one contractor that they all prefer? And if so, does he offer bulk discounts on manacles, formaldehyde and surgical instruments?) To watch this cartoon nightmare spectacle, you'd think 21st century America was a suburbanized version of medieval Europe, a hell-on-earth where bloodthirsty highwaymen stalk every road and routine trips between hamlets end with travelers' corpses piled in meadows, crows feasting on their guts.

Granted, it's not as though NBC, ABC and Fox are much less dependent on crime shows than CBS, or that there's not a longstanding tradition of building prime time schedules around tales of horror and justice. But there's something distinctively icky, and singularly American, about the CBS programs. I think it has to do with the network's corporate personality, which fuses Nielsen-chasing shamelessness with heartland pandering and a faintly sanctimonious blandness. The crime-oriented dramas on Fox and ABC --  and to a lesser extent NBC -- have a tawdry edge, too; but they seem less ashamed of themselves, and their overall lack of pretension leavens the gruesomeness. The shows affect a pulp or suspense writer's sense of play; they treat the genre as an exercise or a lark. There no such spirit on CBS. Factor out the rare splash of personality (Simon Baker's twinkly-eyed melancholy on "The Mentalist," for instance, or L.L. Cool J's homeboy-soldier cool on "NCIS: Los Angeles"), and the Eye Network's crime shows feel more alike than different. They're glossy, rubbernecking death-wallows posing as public service announcements. There's rarely any showmanship (much less artistry) to liven up the tedious, penny dreadful nastiness -- just cheesy/ominous music; boringly composed images; brownish yellow, inside-of-a-toaster-oven lighting, and slumming A-list character actors furrowing their brows while sealing thumbs and kidneys in evidence bags.

The network has hit a new low with "Criminal Minds: Suspect Behavior" (Wednesdays 10 PM/9 central), a clone of "Criminal Minds" that might as well have been devised via CBS Crime Show Mad Libs. It's about yet another team of intrepid FBI profilers led by by a brooding, sharp-dressed, slightly mysterious loner; this time it's Forest Whitaker's Sam "Coop" Cooper. The hero's closest confidant, Beth Griffith (Janeane Garofalo), doubles as an audience surrogate, blurting out just-fell-off-the-turnip-truck statements that no actual law enforcement agent would utter. (When she learns that a crime case with a white victim is being given more media attention and manpower than a similar case involving black victim, she corrals Coop and peals, "This is outrageous!") Coop and Beth fret about one of their colleagues, a tightly-wound obsessive named Jonathan "Prophet" Sims (Michael Kelly) who once killed a child molester in the line of duty. (Will he kill again? Maybe ... but only because he cares! So! Much!) The show also features crossover appearances by Penelope Garcia (Kirsten Vangsness), the technical analyst/exposition dumper from "Criminal Minds" who dresses like a character in a Lynda Barry cartoon, and regular "surprise" visits by FBI director Jack Fickler (Richard Schiff), who discusses ongoing cases with Coop in person and hand-delivers promotions to field agents. (He's not big on the whole "delegation" thing.)

The pilot starts with a voyeuristically-tinged scene in which a little blonde girl gets lured into a van by a maniac. Things get uglier from there: turns out the perp is a child kidnapper and murderer who imprisons his victims (most of whom are African-American) in a suburban house with multiple pink, girly decorated bedrooms, then murders them and buries their bodies in a weed strewn lot beneath a freeway overpass. The episode's fixation on cliched signifiers of "childhood innocence" feels nearly as creepy as the perp's assaults. One of the victims gets snatched while going to a store to buy ice cream. (On TV, kids are never kidnapped while buying Vitamin Water or falafel; it's always ice cream or lollipops or some other "kid" food.) When Sims tracks down a potential suspect and interrupts him while he's reading a story to a couple of kids, the snippet we hear him recite sounds like it's from a book aimed at preschoolers ("...and so the sad little goat told the piggies that he couldn't be their friend anymore..."); yet the children look to be about eight or nine. When the episode's energy flags, the filmmakers cut to the maniac terrorizing two little girls, bellowing at them until they weep in terror and beg him to take them home. Now that's entertainment!

"Criminal Minds: Suspect Behavior" is so silly, cynical and inept that its overqualified cast can't even save it -- though Whitaker and Schiff refuse to admit defeat. Whitaker Shatner-izes his lines, stammering, muttering, pausing in odd spots, and empathizing so hard that he looks as though he's about to collapse in tears screaming, "Why, God? Why????" (Next week's episode, which revolves around the search for a medical malpractice revenge killer, includes one of the greatest bad acting moments I've ever seen: Whitaker emoting his way into a killer's mindset while cradling a Ziploc bag containing two eyeballs.) Schiff affects a bizarre tone that's somewhere between exasperated and ironic, as if he decided to play the FBI director as a man so bored by life that he amuses himself by talking like a character in a CBS crime show. "I didn't expect to see you here," says Coop, entering profiler headquarters at the end of tonight's pilot and spotting Fickler on the other side of the room. "And yet here I am," Fickler replies, letting the line trail off, then glancing down and to the right and wincing.

'Suspect Behavor" playacts relevance by highlighting the media's preference for white crime victims over black ones ("The implications of that are so distressing!" Beth says), but that's just a fig leaf hiding its soul sickness. Like most CBS procedurals, this one is mainly interested in seeing how much perversity and fear it can serve up while maintaining the pretense of clinical distance. No dice: This is one sick piece of trash. Between its plasticized pseudo-characters, compositionally indifferent camerawork, "Real dialogue to be inserted later" lines, and lingering images of cruelty and pain masquerading as portraits of man's inhumanity to man, "Suspect Intentions" plays like a Thomas Harris novel adapted by Ed Wood. For those of you compiling lists of the worst new TV series of 2011: Pencils down, y'all. We have a winner.