Why we should believe Bernie Madoff now 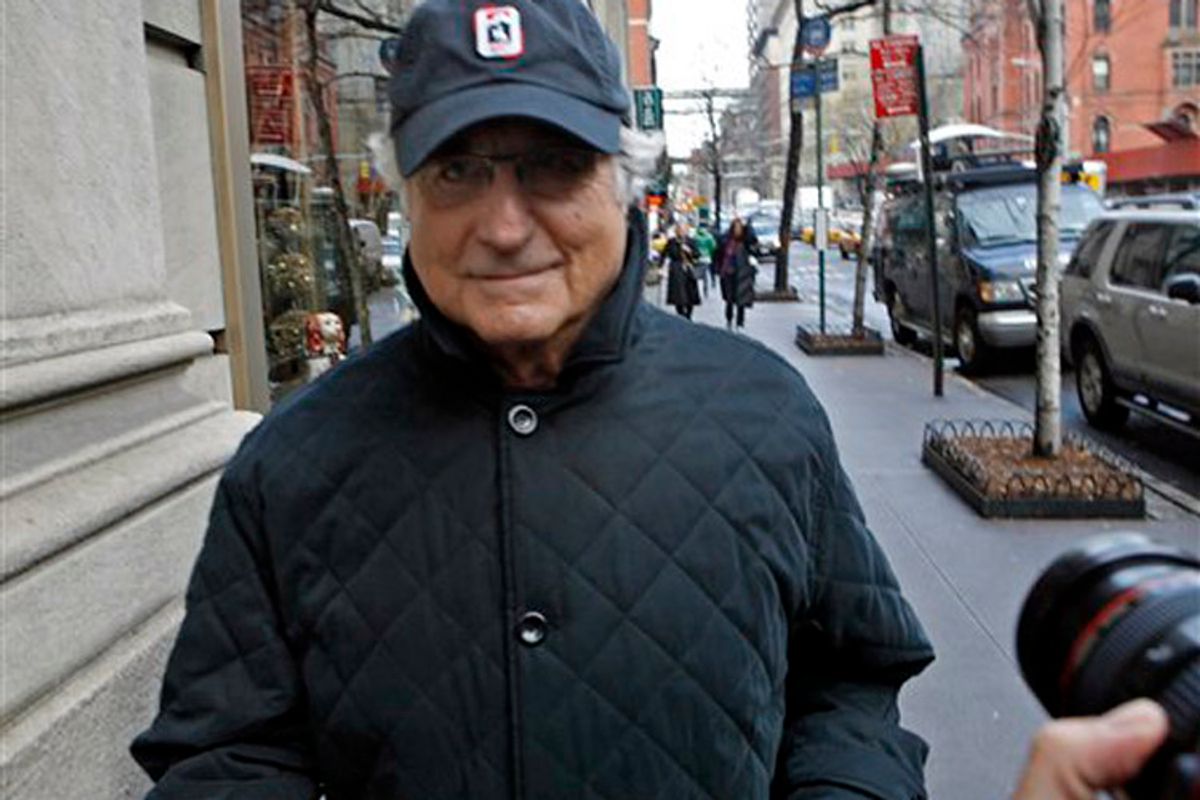 Bernard Madoff, chairman of Madoff Investment Securities, returns to his Manhattan apartment after making a court appearance Wednesday, Dec. 17, 2008 in New York. The judge in Madoff's fraud case has set new conditions for his bail, including a curfew and ankle-monitoring bracelet for the disgraced investor. (AP Photo/Jason DeCrow) (Jason Decrow)
--

In an interview published in the New York Times that's getting a lot of play, Bernie Madoff says the banks "had to know" that his numbers didn't add up.

...[Madoff] asserted that unidentified banks and hedge funds were somehow "complicit" in his elaborate fraud, an about-face from earlier claims that he was the only person involved.

He spoke with great intensity and fluency about his dealings with various banks and hedge funds, pointing to their "willful blindness" and their failure to examine discrepancies between his regulatory filings and other information available to them.

"They had to know," Mr. Madoff said. "But the attitude was sort of, 'If you're doing something wrong, we don't want to know.'"

Should we trust him? After all, if there is one thing we know about Bernie Madoff, it is that he is one hell of a liar. But as evidence emerges that bank executives were exchanging e-mails wondering about Madoff's amazing investment record, the possibility that the banks were purposefully looking the other way is not inconceivable.

The question is: What to do about it?

How about: Make sure government regulatory agencies entrusted with oversight over financial markets are adequately funded and staffed for the job?

Wouldn't you know it -- Obama wants to boost the budget for the Securities and Exchange Commission and the Commodity Futures Trading Commission, the two key government agencies watching over Wall Street. Republicans want to cut them.

That stands in stark contrast to a continuing resolution (CR) offered last week by House Republicans on the Appropriations Committee, that is due to be considered on the House floor Tuesday. In their proposal, the budgets of both agencies would continue to shrink. The SEC would receive $1.069 billion, and the CFTC would get $112 million.

One might imagine that if there was one thing that the financial crisis and assorted scandals à la Madoff taught us, it's that we need active, involved and well-funded regulators. Republicans disagree -- indeed, their move to cut funding for the SEC and CFTC is a key tactic in their campaign to eviscerate the Dodd-Frank financial reform bill by denying the federal government the funds to implement it. One can only be astonished at how easily Republicans go about ignoring the wreckage still all too visible from Wall Street's epic joy ride.

Of course, simply funding the SEC isn't enough to reduce the instances of Madoff-level fraud and Wall Street irresponsibility. George Bush significantly boosted the funding and staffing of the SEC in the wake of the Enron and Worldcom scandals, but he appointed regulators who seemed to be under clear instructions not to rock the boat.

And even if Obama's budget proposals are approved, the task for regulators is still daunting. As Aaron Elstein points out at Crain's New York, a $1.4 billion SEC budget is "only slightly higher than the $1.3 billion spent on communications, technology and 'market development' last year by Goldman Sachs."