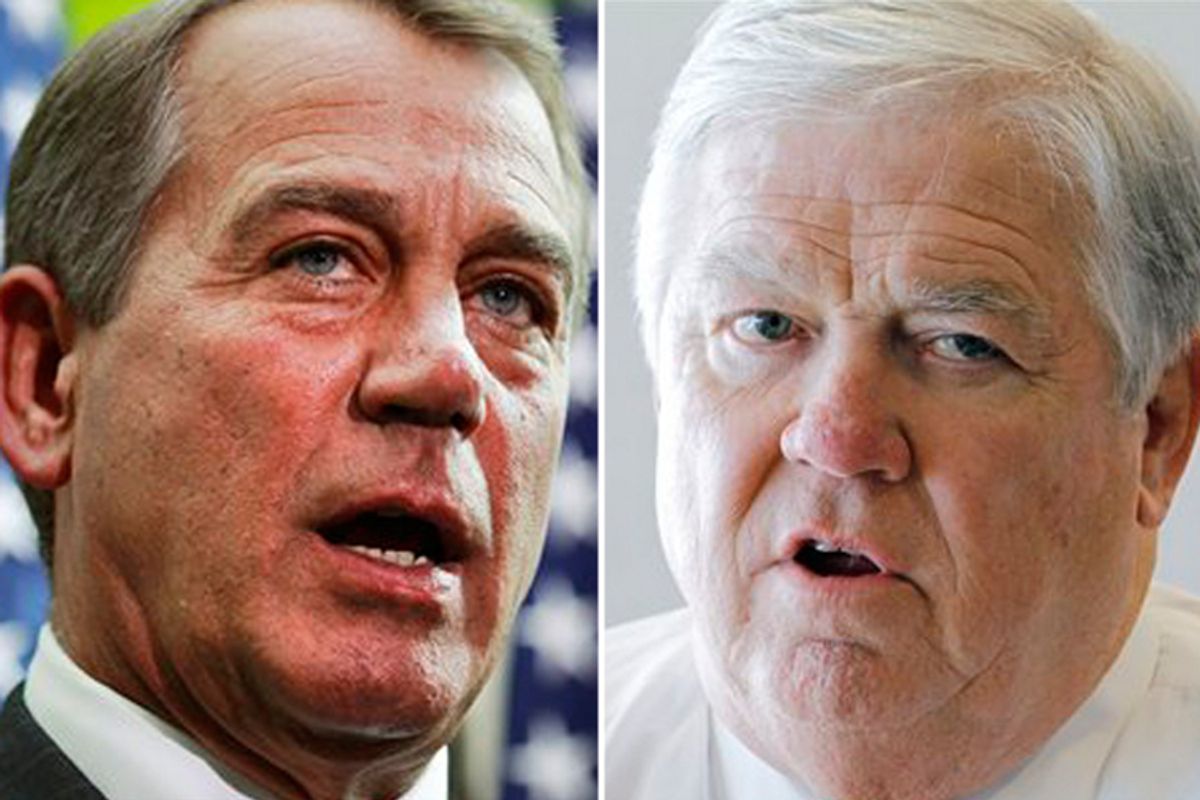 Back when Mississippi Gov. Haley Barbour told a journalist that racism in his hometown of Yazoo City just wasn't "that bad," and credited the local Citizens Council for keeping a lid on the Ku Klux Klan -- yes, that would be the infamous White Citizens Council, enforcer of Jim Crow and purveyor of white supremacy throughout the South -- there was a lively debate over whether Barbour's remarks represented a gaffe. I said at the time I saw a conscious strategy -- to whitewash the history of American racism and appeal to white Americans who are sick of libruls complaining about it -- and that the comments could be the opening salvo of Barbour's unlikely campaign for president in 2012.

Now Barbour's in trouble again for refusing to denounce plans to honor the KKK's first Grand Wizard Nathan Bedford Forrest with a commemorative license plate. Asked about the NAACP's request that he denounce the proposal by the Sons of Confederate Veterans, Barbour told reporters: "I don't go around denouncing people. That's not going to happen. I don't even denounce the news media."

I'm struck by the sudden outbreak of reticence among GOP leaders. Barbour's daintiness comes on the heels of House Speaker John Boehner's refusal to criticize the loud and loony birther contingent in his party on "Meet the Press" last Sunday. "It's not my job to tell the American people what to think," he famously told David Gregory. "Our job in Washington is to listen to the American people. Having said that, the state of Hawaii has said that he was born there. That's good enough for me. The president says he's a Christian. I accept him at his word." When Gregory asked if the speaker was comfortable with Idaho Tea Party freshman Rep. Raul Labrador tweaking Obama by telling conservatives "I'm fortunate enough to be an American citizen by birth, and I do have a birth certificate to prove it," Boehner said again: "It really is not our job to tell the American people what to believe."

Really? Political leaders from both parties make their living telling Americans what to believe, and Boehner's certainly never been shy about it, crusading against the Democrats' alleged "job-killing" fill-in-the-blanks proposals. But he's not alone; his buddy Eric Cantor likewise refused to denounce the birthers, telling Gregory recently, "I don't think it's nice to call anyone 'crazy'" and then attacking the NBC host for trying to get him "to engage in name-calling."

With 51 percent of likely Republican primary voters expressing doubt that the president was born in the United States in a recent poll, you can see Boehner and Cantor's dilemma. Birthers make up a sizable portion, maybe even a majority, of the GOP base, and party leaders have clearly decided to play with political fire by refusing to call them out on it. Now Barbour's joining their conspiracy of silence by refusing to denounce efforts to honor Forrest, lest he offend voters who revere the KKK leader.

Of course, Barbour too is a hypocrite; far from refusing to "denounce" people, he campaigned gleefully against Ronnie Musgrove in 2003, skewering the Democrat in campaign ads for "attacking our flag," after Musgrove endorsed a failed effort to remove the Confederate stars and bars from the Mississippi state banner. (Barbour, of course, proudly wore his state flag pin, stars and bars and all, during the campaign.) He also enjoyed attacking the "Musgrove/Blackmon ticket," featuring heart-shaped photos of Musgrove with black lieutenant governor candidate Barbara Blackmon, even though they didn't run on a ticket. That same year Barbour praised the Head Start program by noting that "some of those kids in it would be better off sitting up on a piano bench at a whorehouse than where they are now." I'd call that denouncing the low-income parents of Head Start students, although I guess it's OK, because he didn't mention anybody by name.

Barbour was far from reticent last year when he rushed to the defense of Virginia Gov. Bob McDonnell after McDonnell issued a proclamation honoring "Confederate History Month" with no mention of slavery. McDonnell's critics were "trying to make a big deal out of something that doesn't amount to diddly." Slavery amounted to more than "diddly" for a lot of black people, of course. And this isn't the first time he's refused an NAACP request to distance himself from white racists: During his campaign against Musgrove, he refused requests by the NAACP to ask the racist Council of Conservative Citizens to remove his photo from its website. He said some of the group's ideas were "indefensible," but he didn't want to tell anyone they couldn't use his photo. "You know, the Clarion-Ledger [the state's largest newspaper] runs my picture. Lots of stuff they say I think is indefensible, too," Barbour said.

Now that Barbour's thinking about running for president of the entire country, not just white Mississippi, you'd think he'd lay off the not-so-coded appeals to white racism. The problem is, too many in his party think Obama-hating white voters are the ticket to the Republican nomination in 2012. So there will be no denouncing birthers this year, and no denouncing plans to honor a KKK grand wizard, whose other claim to fame is his massacre of black Union troops during the Civil War.

But who knows, maybe Barbour's really trying to reach out: He didn't praise Forrest, after all. Let's all be grateful for that.

I'll be talking about the latest from Barbour on MSNBC's "Hardball" today. Tune in.