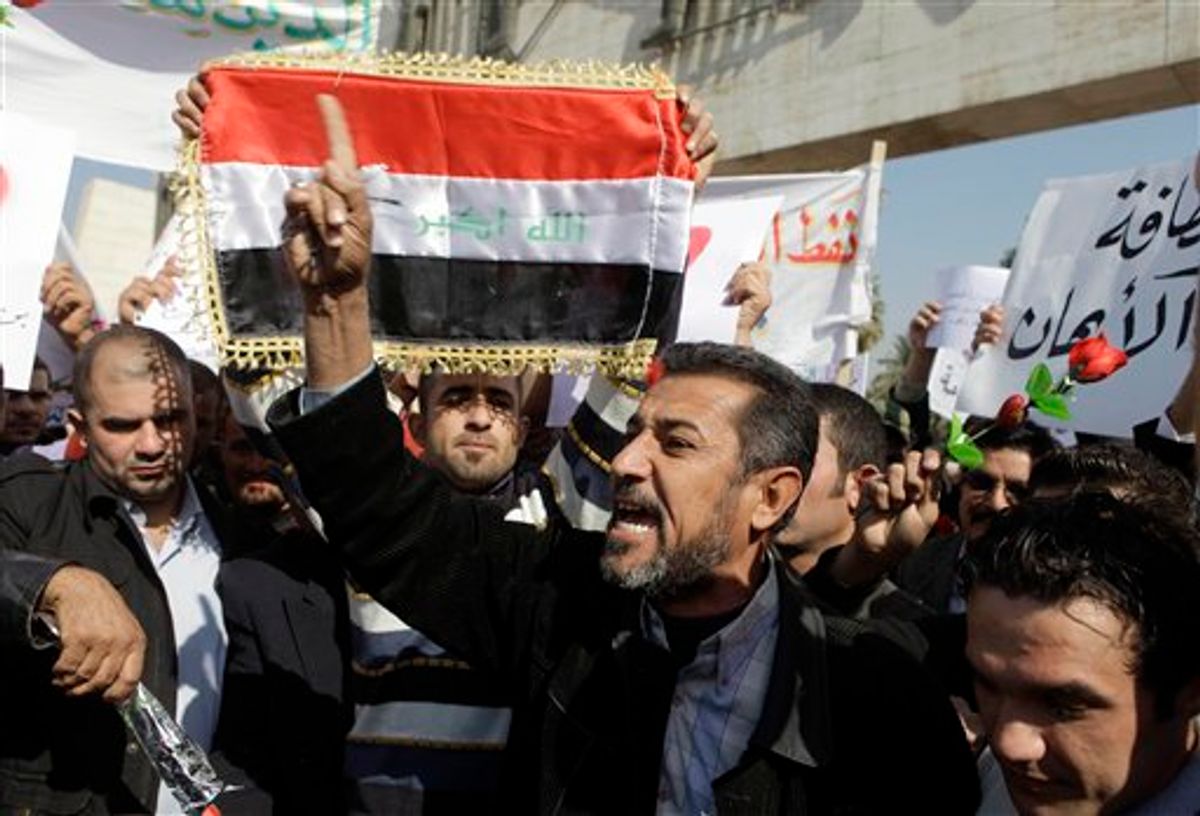 Protesters chant anti-government slogans during a demonstration in Baghdad, Iraq, Monday, Feb. 14, 2011. Hundreds of Iraqis rallied in central Baghdad against corruption and the lack of government services that have plagued this country for years. (AP Photo/Karim Kadim) (AP)
--

A spokeswoman for a southern Iraqi province says around 2,000 people attacked government offices and tried to set fire to the governor's house to protest often shoddy public services.

Sondos al-Dahabi said Wednesday that 13 people were injured in the protest in the city of Kut, 100 miles (160 kilometers) southeast of Baghdad.

She says protesters threw stones at the provincial council headquarters, set a trailer outside on fire and rushed inside the building. They also went to the governor's headquarters and his house, trying to set it on fire. Al-Dahabi says the governor was not at home.

Following the uprisings in Tunisia and Egypt, Iraqis have staged small-scale protests demanding better services, such as electricity.

BAGHDAD (AP) -- Iraq's prime minister sought to repair ties with Kuwait during a visit Wednesday to the nation that Iraq invaded under Saddam Hussein.

Iraq still owes Kuwait about $21 billion in compensation for individuals, companies and organizations that incurred losses during the 1990 invasion and subsequent Gulf War. The neighboring nations are also working to resolve a dispute over their border.

State-run Iraqiya TV announced Nouri al-Maliki's arrival in Kuwait but gave few details on the visit, which a spokesman said would last a day.

The U.N. set Iraq's Saddam-era debt to Kuwait at $52 billion, and Iraq has so far paid off $31 billion from its oil revenues.

The national airline, Kuwait Airways, also wants about $1.5 billion in reparations from Iraqi Airways for the alleged theft of 10 airplanes and millions of dollars worth of spare parts during the invasion.

Iraq is seeking cancellation of the debt, but Kuwait has resisted pressure from both Baghdad and Washington.

In one of the most serious incidents between the two nations in years, Iraqi fishermen killed a Kuwaiti coast guard officer during a shootout last month stemming from a dispute over maritime boundaries and fishing rights.

More broadly, Iraq is trying to reconnect with predominantly Sunni Muslim nations that grew wary of the Shiite-dominated leadership that emerged in Baghdad after the 2003 toppling of Saddam, a Sunni.

Washington is also pressing Iraq's Arab neighbors to play a bigger political role in the country in part to counter the rising influence of Shiite power Iran.

Kuwait has had an ambassador in Baghdad since late 2008.

Kuwait's prime minister also visited Baghdad earlier this month in the first visit by a Kuwaiti premier since the 1991 Gulf War.

There are also business ties. A consortium led by state-run Kuwait Energy won the right to develop Iraq's 1.1 trillion cubic feet Siba gas field during a bidding round in December.