The critics demanding the president do something should look at what he's already done: Healthcare reform 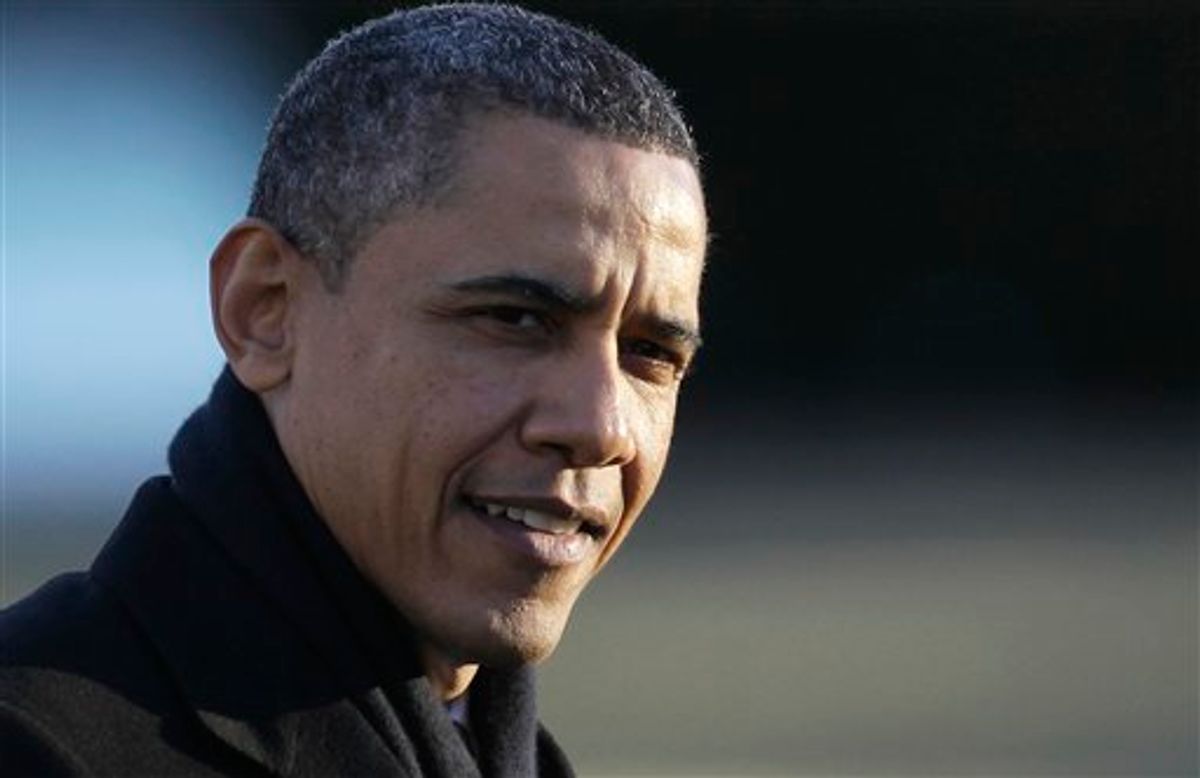 The immediate response of Washingtonian conventional wisdom to President Obama's budget was that he had "punted" on entitlement reform. It's easy to understand this reaction, even if it requires ignoring what the president has actually been doing during his first two years of office. The vast majority of federal government spending falls into four categories: Medicare, Medicaid, Social Security and Defense. But aside from a tiny wave of the hand at the defense budget, Obama's proposals to cut spending didn't touch the Big Four. Therefore, he punted.

For fiscal conservatives like Atlantic.com's Andrew Sullivan, who have been dreaming that Obama would follow the lead of the brave Tory government in the U.K., and immediately put the nation on a strict austerity diet, Obama's budget was a huge disappointment. (Never mind that the U.K. suddenly finds itself in a horrible position, with the economy contracting and inflation rising simultaneously, and no good options to escape the mess.)

In this budget, in his refusal to do anything concrete to tackle the looming entitlement debt, in his failure to address the generational injustice, in his blithe indifference to the increasing danger of default, he has betrayed those of us who took him to be a serious president prepared to put the good of the country before his short term political interests. Like his State of the Union, this budget is good short term politics but such a massive pile of fiscal bullshit it makes it perfectly clear that Obama is kicking this vital issue down the road.

To all those under 30 who worked so hard to get this man elected, know this: he just screwed you over. He thinks you're fools. Either the U.S. will go into default because of Obama's cowardice, or you will be paying far far more for far far less because this president has no courage when it counts. He let you down. On the critical issue of America's fiscal crisis, he represents no hope and no change. Just the same old Washington politics he once promised to end.

In a Tuesday press conference, Obama defended his budget and told reporters who were pestering him about entitlement reform that "you guys are pretty impatient ... If something doesn't happen today, then the assumption is it's not going to happen." But meanwhile, Republicans, sensing a political opportunity, jumped in with gusto, and claimed that their budget, due to be released sometime in April, will "include real entitlement reform."

We will all look forward to the details, because as Republicans will certainly find out (and already know) cutting entitlements is hard and, ironically so, especially so for ... Republicans. Medicare, for example, is universally predicted to be the single greatest driver of rising government spending in the decades ahead, but there are few political constituencies firmly in favor of cutting back on the program. Ever wonder why all Republican gestures at entitlement reform declare that nobody currently older than 55 will see any change in benefits? It's because right now older Americans tend to vote Republican and there would be no better way to alienate them than by cutting their government-paid-for healthcare. In fact, Republicans witheringly attacked the healthcare reform package precisely on the grounds that that it included cuts in Medicare.

And this is where the debate about who is or is not "punting" gets most bewildering. Because if you are looking for concrete action to tackle entitlement debt, there's really one game in town -- and that's the healthcare reform bill that Obama staked his presidency on to pass.

Obama expended massive political capital and sustained significant political damage to enact the toughest possible law he could get curtailing medical cost inflation, which is the single-greatest long-term driver of the deficit.

Medicare costs will rise for two reasons: America is getting older, and the cost of healthcare is rising faster -- much faster -- than the economy is growing. We can't do much about the first factor, so we're going to have to focus on the second. And that's exactly what the healthcare reform package does. The Affordable Care Act is packed with initiatives that will test different approaches to containing costs. Some of the better known include funding for comparative effectiveness tests -- cost/benefit analyses that aim to find out which treatments deliver the best healthcare results for the least cost -- and the establishment of insurance "exchanges" that will allow consumers to compare and contrast the different plans offered by healthcare providers, and thus inject some real transparency and competition into a market that is incredibly opaque. But there are many more, such as funding for electronic records modernization and other information technology upgrades, which should lower costs and give doctors better access to the data on drug and treatment effectiveness. There are also so-called medical bundling programs, which aim to move doctors and hospitals toward a model in which quality of treatment is more important than quantity of treatment.

My readers from the left will likely respond that a robust public option -- Medicare for all -- would do a better job of bringing down costs than the hodgepodge of approaches stuffed into the ACA. And they're probably right, but I still think the chances that a healthcare bill with a public option in it could have passed the Senate were nil. My readers on the right may point to Republican proposals -- vouchers, or allowing consumers to purchase healthcare across state lines. I'm less convinced of their likely effectiveness, but the point is moot. When Republicans controlled the White House and Congress they didn't do anything to deal with healthcare costs, other than a budget-busting prescription drug boondoggle, and they still haven't put together any serious proposed legislation that tackles the problem.

It's also probably fair to say that the steps taken in the ACA are  too small to make any real headway in significantly reducing government deficits. Sure, there's room to be disappointed. The best one can say is that they are a start. But that's something, because  there is only one president in modern times who has made any progress at all in addressing the challenge of medical cost inflation, which is at the heart of rising entitlement costs. And that's the president that we've got right now. If that's how he punts, I think any football team would be glad to have him.