Scottish deerhound is best in show at Westminster 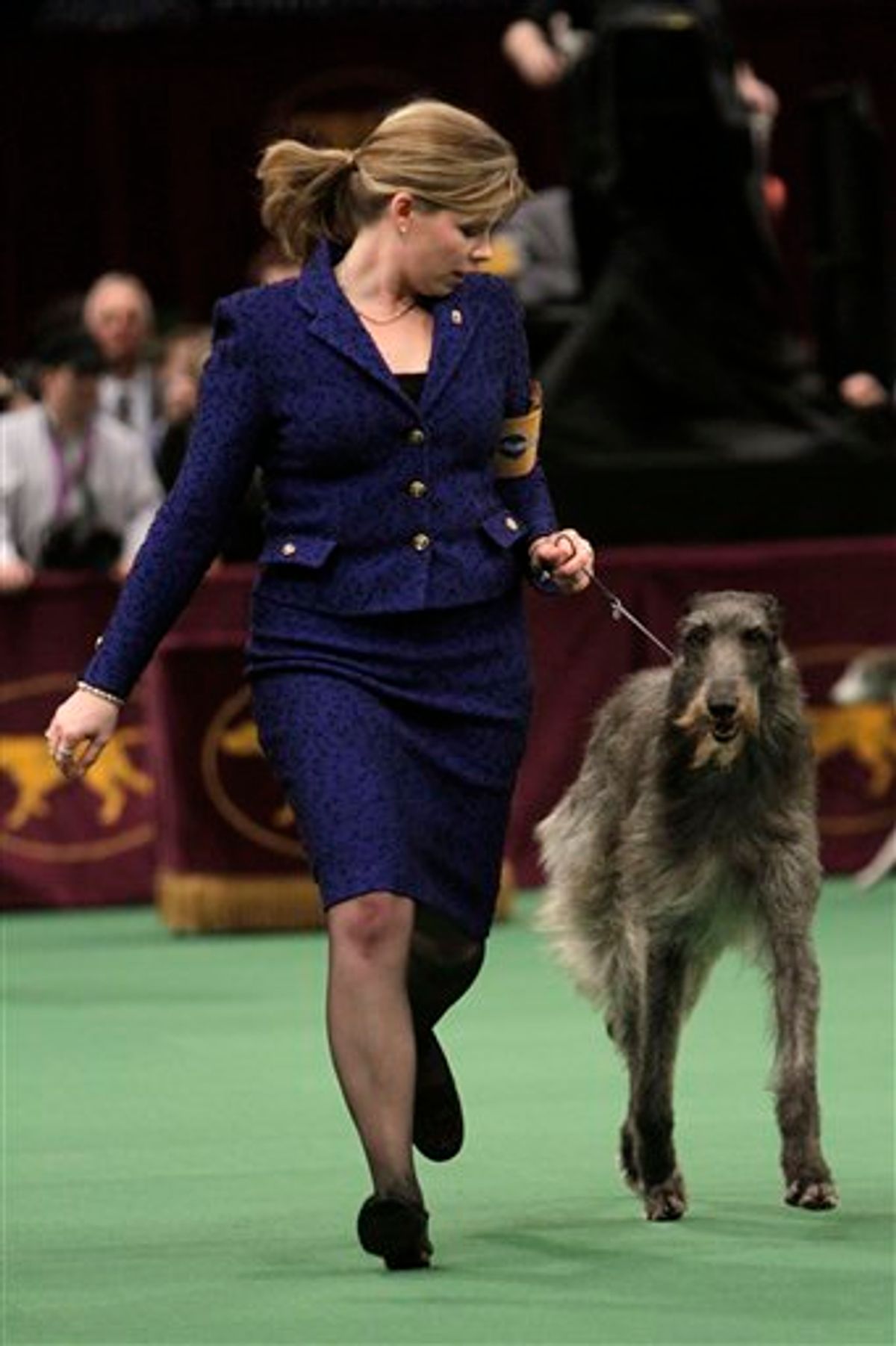 A Scottish deerhound that loves to chase deer and rabbits on a 50-acre farm in Virginia did more than fine at Madison Square Garden this week, winning best in show at the Westminster Kennel Club on Tuesday night and the title of America's top dog.

Whatever, Hickory will get a couple of Manhattan treats on Wednesday -- steak at famed Sardi's restaurant and a trip to the top of the Empire State Building.

The 5-year-old Hickory became the first of her breed to capture the purple-and-gold ribbon and shiny silver bowl.

By dog world standards, it was an upset. OK, maybe not quite as big as the Hickory Huskers winning the Indiana high school state basketball championship in the film "Hoosiers," but quite a surprise nonetheless.

"I think Hickory could feel my lead that I was excited and went with it," Lloyd said.

Judge Paolo Dondina of Italy thanked every person and dog inside the arena, then picked Hickory from a best-of-seven final show ring that truly sounded international -- along with a Scottish deerhound, there was a Pekingese, Portuguese water dog, Chinese shar-pei, smooth fox terrier, bearded collie and black cocker spaniel.

A couple of those pooches on the green carpet ring with Hickory were among the country's top-rated show dogs. The 85-pound Hickory wasn't on that list, though she wagged her long tail the most at the end after beating out a total of nearly 2,600 entries. No doubt, owners Sally Sweatt and Cecilia Dove and Dr. Scott Dove were equally thrilled after her 16th best-in-show overall.

"The quality of all of the dogs were outstanding," Dondina said. "This animal is like in the heavens. It's not of this world."

The 135th Westminster was considered a wide-open field from the start. A smooth fox terrier that was the No. 1 show dog of 2010 recently retired and an Australian shepherd that won the big AKC/Eukanuba event did not enter.

Hickory won the hound group Monday night, then had to wait around all day for her big chance. That was a lot to ask for a kind of dog that feels most comfortable in the woods, but she clearly managed to do just fine.

The 31-year-old Lloyd had won at Westminster before -- in 1998, she was honored for her handling in the junior showmanship for youngsters who hope to work in the dog world.

"People who own, breed, show dogs dream of this day," she said.

Among the owners who showed earlier in the day: Brig. Gen. Rhonda Cornum, an Army surgeon who was shot down from a helicopter during the Persian Gulf War and briefly held as a prisoner of war. She was at the Garden showing a Gordon setter.

Cornum was clear on which was more difficult, ascending in the show ring or in the military.

Sitting high up in section 118, Linda Melvin kept her eyes fixed on those Gordon setters competing on the floor. A seat away, her daughter fixated on her cell phone.

Krista Piller was busy posting on Facebook: "Wants a big dog to win the WKC dog show this year."

"I'll being putting up more, too," Piller wrote.

From the stands, to the rings to backstage, people were a-twitter -- iPads, Blackberries, Droids and then some at an event that started in 1877. Signs of social media were everywhere at the Westminster Kennel Club show.

Proving, in fact, that it is indeed possible to teach an old dog show new tech tricks.

"It is now uploaded!" exclaimed Lorraine Shore of Sequim, Wash.

In town with a pair of German pinschers, her peeps worldwide could see on YouTube how her favorite pooches fared.

"From Germany to Australia to California, people are waiting for my postings," she said. "People who have never been here, now they've experienced Westminster."

Westminster had 49,000 friends on Facebook by late Tuesday afternoon, said Susi Szeremy of the kennel club's social media team, and the number quickly zoomed to more than 60,000. There are about 2,400 followers Tweeting along -- litters of twitters.

Ken Roux of Dixon, Ill., made it easy for anyone to keep track of his Boston terrier at the 135th Westminster event. Hoss won a best of breed award Monday.

Roux put a tag with a QR code, a sophisticated set of small squares randomly appearing in a larger square, on top of his dog's crate. The pattern is more than an inch square, and anyone pointing a smartphone at the pattern is automatically taken to Hoss' website.

Brook Berth, an assistant to Hoss' handler, said she'd heard only one other dog at Westminster had the QR tag, which stands for "quick response." The new technology allows people to instantly access the dog's history and contacts.

"I noticed a lot of people taking pictures," Berth said. "It's just so convenient. You don't have to worry about people writing down information or passing out cards. They have it all right away."