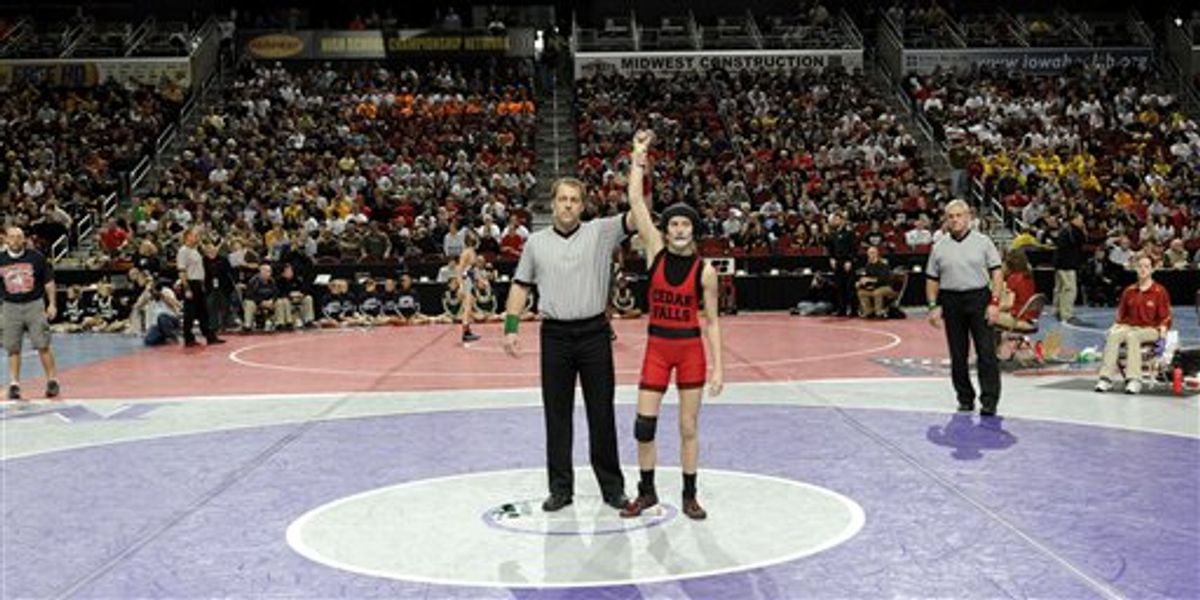 Cedar Falls' Cassy Herkelman gets her arm raised after winning by default in a Class 3A 112 pound match at the Iowa State Wrestling tournament, Thursday Feb. 17, 2011 in Des Moines, Iowa. Herkelman was one of the first girls to ever qualify for the state tournament and won by default after her opponent Joel Northrup of Linn-Mar High, refused to wrestle a girl. (AP Photo/Steve Pope) (AP)
--

A standout Iowa high school wrestler refused to compete against a girl at the state tournament on Thursday, relinquishing any chance of becoming a champion because he says wrestling a girl would conflict with his religious beliefs.

But in a brief statement issued through his school, Northrup said he defaulted on his match with Herkelman because he doesn't think boys and girls should compete in the sport.

"I have a tremendous amount of respect for Cassy and Megan and their accomplishments. However, wrestling is a combat sport and it can get violent at times," said Northrup. "As a matter of conscience and my faith I do not believe that it is appropriate for a boy to engage a girl in this manner. It is unfortunate that I have been placed in a situation not seen in most other high school sports in Iowa."

There were several thousand fans at Wells Fargo Arena on Thursday, but many were watching other matches when the referee raised Herkelman's hand to signal her win. There was a smattering of cheers and boos from the crowd before Herkelman was whisked into the bowels of the arena.

Tournament organizers declined to make Herkelman available for questions. She entered the tournament with a 20-13 record and will wrestle Friday in the quarterfinals of the 112-pound weight class.

Her father, Bill Herkelman, told The Associated Press via text message that he understands and respects Northrup's decision.

"It's nice to get the first win and have her be on the way to the medal round," Bill Herkelman wrote. "I sincerely respect the decision of the Northrup family especially since it was made on the biggest stage in wrestling. I have heard nothing but good things about the Northrup family and hope Joel does very well the remainder of the tourney."

Because he defaulted and didn't forfeit, Northrup was allowed to compete in the consolation rounds, and he won his first match later Thursday by major decision.

He was spared any chance of meeting up with Black, who also wrestles at 112 pounds and was 25-13 entering the tournament, when she was eliminated after being pinned in both of her matches. But it's possible Northrup and Herkelman could be matched again if both make the finals of the consolation bracket.

Northrup's father, Jamie Northrup, is a minister in the Believers in Grace Fellowship, an independent Pentecostal church in Marion that believes young men and women shouldn't touch in a "familiar way," said Bill Randles, the church's pastor.

"We believe in the elevation and respect of woman and we don't think that wrestling a woman is the right thing to do. Body slamming and takedowns, that full contact sport is not how to do that."

Randles said Joel has been involved in wrestling for many years, and he and his family have discussed before the possibility of girls getting involved in the sport.

"It's totally his choice. He's a young man now and he's worked hard to get where he's gotten. It's up to him, and it was his conviction" not to wrestle Herkelman.

Black said Northrup refused to wrestle her three years ago, and that she respects him for adhering to his beliefs.

"If it's his religion and he's strong in his religion, then I just respect that," Black said. "Obviously, everyone can be pointing fingers at him. He, at least, is true to his beliefs and you have to respect that. It takes a lot for a 15- or 16-year-old boy to do."

Marth Stetzel, a Perry mother whose two sons were taking part in the tournament, said she also didn't have a problem with Northrup's decision.

"We're really raising kids that are going to be bigger than wrestling, and if it's something that he believes strongly in -- which is not necessarily what I would do -- you've got to respect a kid like that," Stetzel said.

Wrestling is extremely popular in Iowa, and Black and Herkelman are the first girls to qualify for the state tournament since it was first sanctioned by the Iowa High School Athletic Association in 1926.