Overview of Middle East crackdowns and the (varying) U.S. responses

A quick and clean country-by-country guide to the protests in the Middle East, including America's responses 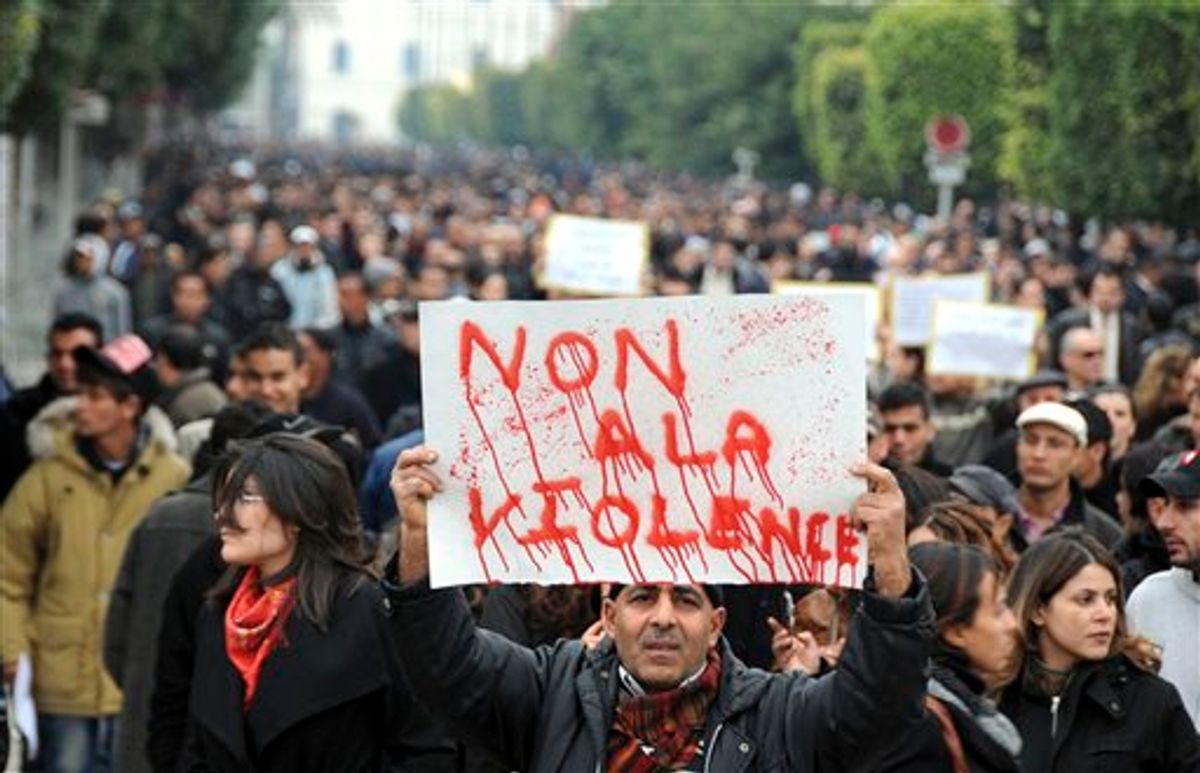 Protestors supporting the government and opposed to strikes demonstrate in Tunis, Tuesday Jan. 25, 2011. Tunisia's so-called "Jasmine Revolution" has sparked scattered protests and civil disobedience in the Middle East and North Africa, and much of the world is watching to see how the birth pangs of Tunisian democracy play out. Poster reads: No to the violence. (AP Photo/Hassene Dridi) (AP)
--

As protests -- and crackdowns -- have been rippling through the Middle East, the U.S. response has varied by country.

For instance, while the Obama administration has been vocal about events in Iran, it has been relatively quiet about violence by pro-government forces in Yemen. Here's a brief look at what's happening in some key countries -- and the U.S.'s response in each.

Relationship status with United States: Frenemies In a press briefing last week, Press Secretary Robert Gibbs stated, Our relationship with the government of Yemen is incredibly important in addressing the counterterrorism threat that exists there. As WikiLeaks cables revealed last fall, the country's president, Ali Abdullah Saleh, has allowed secret U.S. air strikes against suspected al-Qaeda militants and covered them up, claiming they were conducted by the Yemeni military.  However, some analysts have said Yemen is playing a double game -- diverting U.S. aid to fight domestic rebels instead of going after al-Qaeda.

What's happening: It's the sixth day of protests in Yemen, and Al Jazeera reports today that protests there are spiraling out of control. Two have died so far in clashes with pro-government supporters armed with knives, rocks, and electroshock sticks. Some anti-government demonstrators have been beaten by Yemeni security forces, according to the Washington Post and Human Rights Watch. The Post also noted that a member of parliament resigned yesterday, saying that the ruling party's failure to fight corruption and its involvement in attacking peaceful demonstrators is against my morals .

U.S. response:Salon noted over the weekend that the Obama administration hadn't said anything in recent days about the violence in Yemen. Earlier this month, President Obama had called Yemen's President Saleh and asked that Yemeni security forces show restraint and refrain from violence against demonstrators. He also urged Yemen to take forceful action against al-Qaeda, according to the State Department.

Relationship status with U.S.: It's complicated As U.S. diplomatic cables show, relations between the U.S. and Algeria have warmed gradually in recent years. A February 2008 cable shows U.S. diplomats calling the Algerian military intelligence a prickly, paranoid group to work with, but noted that cooperation had paid dividends. A cable sent early last year noted Algeria's strategic importance in the fight against al-Qaeda in the region.

What's happening: According to the BBC, sporadic protests in Algeria have been continuing since early January, mostly triggered by economic conditions in the face of government wealth. Algerian security forces arrested dozens of protesters and police attacked some journalists in crackdowns over the weekend.

We note the ongoing protests in Algeria, and call for restraint on the part of the security services. In addition, we reaffirm our support for the universal rights of the Algerian people, including assembly and expression. These rights apply on the internet. Moreover, these rights must be respected. We will continue to follow the situation closely in the days ahead.

Relationship status with United States: BFF The small oil-producing country and financial center has played host to a robust U.S. military presence as home of the U.S. Navy's Fifth Fleet. Bahrain's Sunni rulers -- which rule over a majority-Shi'ite population -- keep close to their American protectors, according to a 2008 WikiLeaks cable.

What's happening: It's the third day of protests in Bahrain. Two protesters have died in clashes with the police. Government officials have apologized for the killings and promised to investigate the policemen behind the incidents. Advocacy groups Amnesty International and Human Rights Watch have called on authorities to stop the use of excessive police force in attacks on peaceful protesters. The UN High Commissioner for Human Rights had even stronger words for the government, urging them to curb the excesses of the security apparatus and to undertake serious investigations into allegations of torture and abuse of detention rights of hundreds of political and human rights activists. In an effort to quell the protests, Bahrain's king had offered to pay $2,650 to each family. Al Jazeera is keeping a live blog on the events.

The United States is very concerned by recent violence surrounding protests in Bahrain. We have received confirmation that two protesters in Bahrain were recently killed, and offer our condolences to the families and friends of the two individuals who lost their lives.

The United States welcomes the Government of Bahrain's statements that it will investigate these deaths, and that it will take legal action against any unjustified use of force by Bahraini security forces. We urge that it follow through on these statements as quickly as possible. We also call on all parties to exercise restraint and refrain from violence.

Relationship status with United States: Enemies The U.S. currently has sanctions against Iran and has long tried to prevent it from developing nuclear weapons.

What's happening: Yesterday, members of the Iranian Parliament called for the leaders of the protest movement to be executed. The government has cracked down on the protests and worked to block coverage. Two protesters have been reported killed.

U.S. response: The U.S. response to Iran has been far harsher than to other governments suppressing protests. State Department spokesman PJ Crowley said on Monday that the U.S. condemned the violence in the strongest terms:

We are deeply concerned about reports that one person has been killed and two wounded in clashes with security forces. Those security forces are arresting, beating, and using tear gas against protesters, as well as blocking them from using public transportation, cell phones, and other means of communication. Iran reportedly continues to jam news coverage in the country. Both major opposition leaders remain under house arrest, and this is in conjunction with a wave of other arrests of opposition figures, including women's rights advocates, leading up to the protests.

By announcing that they will not allow opposition protests, the Iranian government has declared illegal for Iranians what it claimed was noble for Egyptians. We call on the government of Iran to allow the Iranian people the universal right to peacefully assemble, demonstrate and communicate that's being exercised in Cairo.

The U.S. also set up a Twitter feed that sends messages in Farsi to the Iranian people. The Times noted yesterday that the administration has all but encouraged protesters to take to the streets.

Asked in a briefing this week about why the State Department is condemning what is happening in Iran and not taking the same position on crackdowns elsewhere, Crowley said. Well, actually, in the other countries there is greater respect for the rights of the citizens. I mean, we are watching developments in other countries, including Yemen, including Algeria, including Bahrain. And our advice is the same.

What's happening: Earlier this month, Jordan's king sought to appease protesters by dismissing his cabinet. He swore in a new government last week -- a mix of familiar faces and opposition leaders.

U.S. response: Over the weekend, President Obama called Jordanian King Abdullah to discuss the developments in Egypt and assure him of the U.S.'s support. Reports the Los Angeles Times:

Seeking to ease those fears, President Obama called the king over the weekend and has dispatched a procession of top officials to Jordan to reassure him of Washington's support. The emissaries included the State Department's No. 3 official, William J. Burns, and the top U.S. military officer, Joint Chiefs Chairman Adm. Michael G. Mullen.

U.S. concern over Jordan became apparent last month, when the administration abruptly increased its annual aid contribution of $363 million by an additional $100 million, targeted primarily at the country's poor.

Protests also broke out in the city of Benghazi in Libya as well as in one city in southern Iraq today. In Iraq, guards protecting government headquarters killed one demonstrator, the Post reported. Reuters has reported that three protesters have died there. We haven't seen an official comment from the U.S. on either of these.