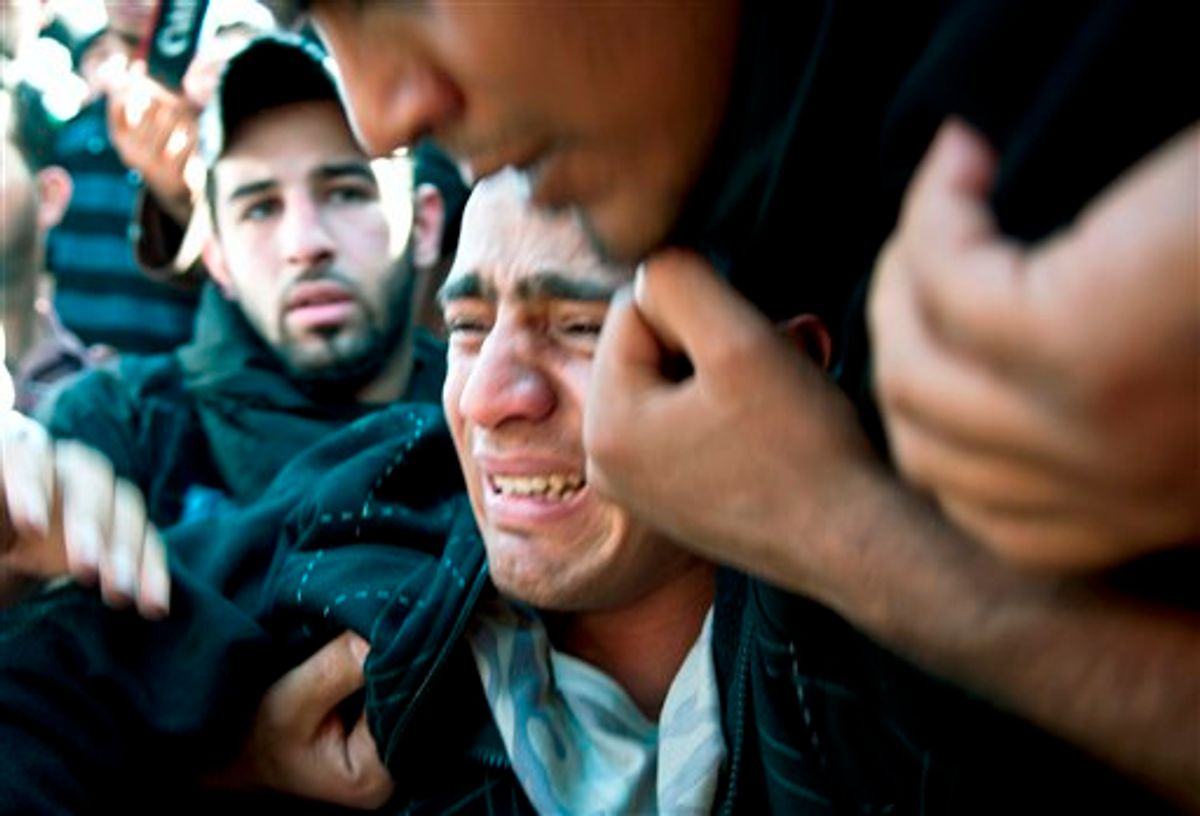 Army patrols and tanks locked down the capital of this tiny Gulf kingdom after riot police swinging clubs and firing tear gas smashed into demonstrators, many of them sleeping, in a pre-dawn assault Thursday that uprooted their protest camp demanding political change. Medical officials said four people were killed.

U.S. Secretary of State Hilary Clinton is reportedly planning to call her counterpart in Bahrain and voice strong opposition to the use of force to control the unrest. One source within the administration told ABC News' Jake Tapper:

The United States strongly opposes the use of violence in Bahrain. Wherever they are, people have certain universal rights -- including the right to peaceful assembly. We continue to urge the government of Bahrain to show restraint in responding to peaceful protests.

Hours after the attack on Manama's main Pearl Square, the military announced on state TV that it had "key parts" of the capital under its control and that gatherings were banned.

The developments marked a major crackdown by the island nation's rulers to put an end to days of protests inspired by Egypt's revolt against Hosni Mubarak. Tiny Bahrain is a pillar of Washington's military framework in the region. It hosts the U.S. Navy's 5th Fleet, which is a critical counterbalance to Iran's efforts to expand its clout in the region.

The capital Manama was effectively shut down Thursday. For the first time, tanks and military checkpoints were deployed in the streets and army patrols circulated. The Interior Ministry warned Bahrainis to stay off the streets. Banks and other key institutions did not open, and workers stayed home, unable or to afraid to pass through checkpoints to get to their jobs.

Barbed wire and police cars with flashing blue lights encircled Pearl Square, the site of anti-government rallies since Monday. Police cleaned up flattened protest tents and trampled banners inside the square, littered with broken glass, tear gas canisters and debris. A body covered in a white sheet lay in a pool of blood on the side of a road about 20 yards (meters) from the landmark square.

Demonstrators had been camping out for days around the square's 300-foot (90-meter) monument featuring a giant pearl, making it the nerve center of the first anti-government protests to reach the Arab Gulf since the uprisings in Tunisia and Egypt.

The protesters' demands have two main objectives: force the ruling Sunni monarchy to give up its control over top government posts and all critical decisions, and address deep grievances held by the country's majority Shiites who claim they face systematic discrimination and are effectively blocked from key roles in public service and the military.

But among Bahrain's rulers, the prospect of a prolonged crisis raised fears of a potential flashpoint between Iran and its Arab rivals in the Gulf. Bahrain's ruling Sunni dynasty is closely allied to Saudi Arabia and the other Arab regimes in the Gulf. Shiite hard-liners in Iran have often expressed kinship and support for Bahrain's Shiite majority, which accounts for 70 percent of the island's 500,000 citizens.

The police assault came early Thursday with little warning. Mahmoud Mansouri, a protester, said police surrounded the camp and then quickly moved in.

"We yelled, 'We are peaceful! Peaceful!' The women and children were attacked just like the rest of us," he said. "They moved in as soon as the media left us. They knew what they're doing."

Dr. Sadek Al-Ikri, 44, said he was tending to sick protesters at a makeshift medical tent in the square when the police stormed in. He said he was tied up and severely beaten, then thrown on a bus with others.

"They were beating me so hard I could no longer see. There was so much blood running from my head," he said. "I was yelling, 'I'm a doctor. I'm a doctor.' But they didn't stop."

He said the police beating him spoke Urdu, the main language of Pakistan. A pillar of the protest demands is to end the Sunni regime's practice of giving citizenship to other Sunnis from around the region to try to offset the demographic strength of Shiites. Many of the new Bahrainis are given security posts.

Al-Ikri said he and others on the bus were left on a highway overpass, but the beatings didn't stop. Eventually, the doctor said he fainted but could hear another police official say in Arabic: "Stop beating him. He's dead. We should just leave him here."

Bahrain's parliament -- minus opposition lawmakers who are staging a boycott -- met in emergency session. One pro-government member, Jamila Salman, broke into tears.

A leader of the Shiite opposition Abdul Jalil Khalil said 18 parliament members also have resigned to protest the killings.

As the crackdown began, demonstrators in the square described police swarming in through a cloud of eye-stinging tear gas.

"They attacked our tents, beating us with batons," said Jafar Jafar, 17. "The police were lined up at the bridge overhead. They were shooting tear gas from the bridge."

Many families were separated in the chaos. An Associated Press photographer saw police rounding up lost children and taking them into vehicles.

Hussein Abbas, 22, was awakened by a missed call on his cell phone from his wife, presumably trying to warn him about reports that police were preparing to move in.

"Then all of a sudden the square was filled with tear gas clouds. Our women were screaming. ... What kind of ruler does this to his people? There were women and children with us!"

ABC News said its correspondent, Miguel Marquez, was caught in the crowd and beaten by men with billy clubs, although he was not badly injured.

Hospital officials, speaking on condition of anonymity because they were not authorized to talk to the media, said four people were killed early Thursday. Wounded streamed by the dozens into Salmaniya medical center, the main state-run hospital in Manama, with serious gaping wounds, broken bones and respiratory problems from the tear gas.

Outside the medical complex, dozens of protesters chanted: "The regime must go."

Tanks and armored personnel carriers were seen on some streets -- the first sign of military involvement in the crisis -- and authorities send a text message to cell phones that said: "The Ministry of the Interior warns all citizens and residents not to leave the house due to potential conflict in all areas of Bahrain."

Hours before police moved in, the mood in the makeshift tent city was festive and confident.

People sipped tea, ate donated food and smoked apple- and grape-flavored tobacco from water pipes. The men and women mainly sat separately -- the women a sea of black in their traditional dress. Some youths wore the red-and-white Bahraini flag as a cape.

While the protests began as a cry for the country's Sunni monarchy to loosen its grip, the uprising's demands have steadily grown bolder. Many protesters called for the government to provide more jobs and better housing, free all political detainees and abolish the system that offers Bahraini citizenship to Sunnis from around the Middle East.

Increasingly, protesters also chanted slogans to wipe away the entire ruling dynasty that has led Bahrain for more than 200 years and is firmly backed by the Sunni sheiks and monarchs across the Gulf.

Although Bahrain is sandwiched between OPEC heavyweights Saudi Arabia and Qatar, it has limited oil resources and depends heavily on its role as a regional financial hub and playground for Saudis, who can drive over a causeway to enjoy Bahrain's Western-style bars, hotels and beaches.

Social networking websites had been abuzz Wednesday with calls to press ahead with the protests. They were matched by insults from presumed government backers who called the demonstrators traitors and agents of Iran.

The protest movement's next move is unclear, but the island nation has been rocked by street battles as recently as last summer. A wave of arrests of perceived Shiite dissidents touched off weeks of rioting and demonstrations.

Before the attack on the square, protesters had called for major rallies after Friday prayers. The reported deaths, however, could become a fresh rallying point. Thousands of mourners had turned out for the funeral processions of two other people killed in the protests earlier in the week.

After prayers Wednesday evening, a Shiite imam in the square had urged Bahrain's youth not to back down.

Across the city, government supporters in a caravan of cars waved national flags and displayed portraits of King Hamad bin Isa Al Khalifa.

Thousands of mourners turned out Wednesday for the funeral procession of 31-year-old Fadhel al-Matrook, one of two people killed Monday in the protests. Later, in Pearl Square, his father Salman pleaded with protesters not to give up.

Monday's bloodshed brought embarrassing rebukes from allies such as Britain and the United States. A statement from Bahrain's Interior Ministry said suspects have been "placed in custody" in connection with the two deaths but gave no further details.