How 480 characters unraveled my career

My tweets about Lara Logan cost me my job and humiliated my family. Here's what I meant to say 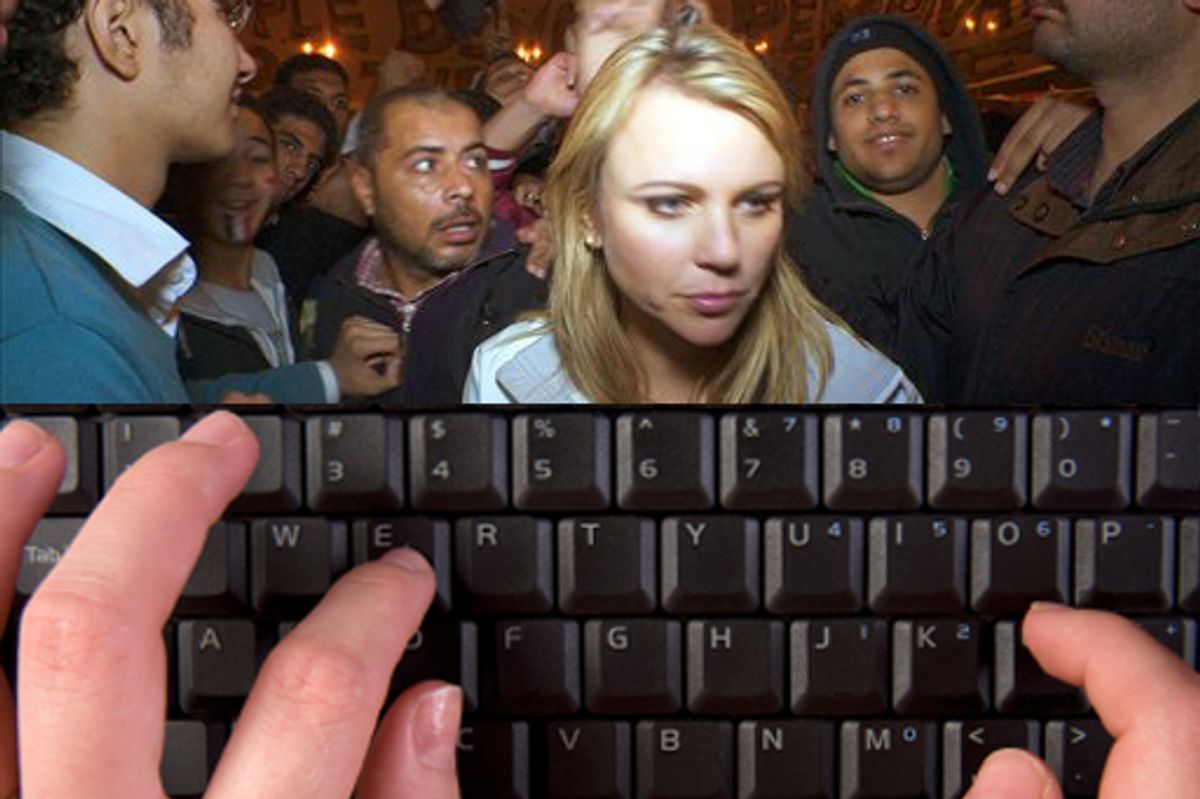 With 480 characters I undid a long career defending the weak and victims of injustice. There is no excuse for what I wrote. At the time, I did not know that the attack against Lara Logan was so severe, or included apparent sexual violence. Even so, any violence against anyone is wrong. I've apologized, lost my job, and humiliated myself and my family. But I, at least, don't want to go down looking like a sexist pig. I am not. I am a staunch supporter of women's rights, gay rights and the rights of the weak anywhere in the world.

This is not the first time my words have landed me in trouble. I have been challenged many times on my support of resistance movements and my support of engaging with America's enemies, and I have never and will never apologize for those stances. I continue to apologize for this comment because it in no way reflects the way I feel about women or violence. Sexual assault is never funny, and it is a terrible crime. I have apologized to Ms. Logan and her family, and to victims of sexual violence everywhere.

So why did I write it? It was a disgusting comment born from dark humor I have developed working in places like Iraq, Afghanistan, Somalia, Yemen and Lebanon -- and a need to provoke people. I have a few think tank friends on Twitter, and we often banter about the morality of WikiLeaks, counterinsurgency and other issues. When I first heard the news about Logan, I assumed she was roughed up like every other journalist -- which is still bad -- but I was jokingly trying to provoke one of my think tank friends on Twitter, thoughtlessly, of course, and terribly insensitively. Stupidly, I didn't think the banter between myself and a couple of other guys would amount to anything.

Now, Twitter is no place for nuance, which is why I should have stuck to long-form journalism. And I have been frustrated by the ideological opportunists who have used this ordeal for their personal gain. People whose words have helped create and justify war and genocide are now jumping onto this issue to attack me for my previous journalism (which, naturally, I stand by). People like Jeffrey Goldberg, who has blood on his hands, and now acts like he's never heard of me, jump in and use the disgusting situation of Logan's assault as a lever against a longtime rival. Others include Michael Totten, Lee Smith and Jim Geraghty of the National Review, who led the crusade against me. I used a horrible situation as a way to provoke some friends. They are using it to further their careers.

So, given the opportunity here for some nuance, I feel I should explain the point I really was trying to make. Had Logan been a non-white, non-famous journalist, this story would have never made it to the news. Ahmed Mahmoud, an Egyptian journalist, was killed in cold blood and nobody ever heard of him. Dozens of other women were harassed and nobody will ever know their names. Credible accounts indicate that the assaults on women took place largely on the Friday of the victory celebration, when millions of non-demonstrators joined the party. Countless women (Egyptian and foreign, journalists and others) have reported being harassed and assaulted in Tahrir Square that Friday, mostly, it seems, by non-revolutionaries. (This harassment was a preexisting problem that Egyptian women have been increasingly complaining about.)

So why all the focus on Logan? The U.S. media did not care when Egyptian journalists (or any other Egyptian) were being jailed. Only when pretty white people showed up did Egypt really start to matter, and then, they were preoccupied with the scary Muslim Brotherhood possibly taking over, or what would happen to poor Israel now that there was a "threat" of democracy in Egypt.

This is why I wrote in a Twitter that I was already rolling my eyes. Even before we knew what happened to her, I knew how to anticipate the media response in the United States. So Logan and Anderson Cooper have become the story, instead of the thousands of Egyptians who have far more compelling stories.

Meanwhile, I have not seen any condemnation of the pure hatred, racism and vitriol that I've seen spewed all over the Internet in response to the Logan story. I've seen Arabs, Muslims and Egyptians called animals and pigs in tens of websites and, right under the Logan stories, read vile rhetoric about them that would never be acceptable if used against any other group.

I really have been outraged by Logan's stories in the past, which I feel have defended American imperial adventures that cost the lives of many thousands of people in the Middle East, glorified American special forces even while they were killing innocent Afghans, and praised Gen. Stanley McChrystal, while condemning her own colleague, Michael Hastings, of Rolling Stone (because he hadn't served his country, she said). My resentment of Logan was because I felt she was a terrible journalist who supported wars that I had covered.

But joking about her assault betrayed the very principles that led me to condemn her in the first place. And her destructive reporting has nothing to do with the crime she suffered, nothing at all. I point it out now only to explain my thinking, not to justify or defend the hurt I caused.

Still, right-wing American pundits called for Julian Assange to be assassinated, and it's perfectly acceptable to proudly support wars that kill thousands of innocent people. Racist right-wing pundits can say whatever they want on serious platforms, Ann Coulter can call for more journalists to be jailed in Egypt at CPAC (and be met with applause) but I made a callous joke on Twitter, a medium far less serious (I thought), and an entire mob turns on me. It's hard not to be cynical about many of the sanctimonious responses I have received. Especially when they come from people who support every kind of American war (or Israeli war), tolerate racism against Arabs and Muslims, and -- while focusing on the plight of celebrities -- ignore outrages like our scorched-earth policies in Kandahar. The attacks have aimed at ending my career, but my career will endure because my work stands on its own.

I'm baffled by the fact that 1,000 new people started to follow me on Twitter. What do they expect to read? It's a bizarre, voyeuristic Internet culture and everybody in the mob is looking to get in on the next fight first, to be at the center of the thing that's happening, even if there's nothing really there. Which might explain the thousands of stupid e-mails and tweets I have received from the mob wanting to get a punch in. But given that I have been condemned for seeming to condone sexual assault, it's surprising how many hundreds (no exaggeration) of people have e-mailed me wishing that I or people close to me will be sexually assaulted.

I also don't think this would have become such a story if I were not a leftist opponent of American wars (even the Washington Post stressed my "pro-Palestinian and pro-Arab political views") and I have a hard time taking a lot of the sanctimonious condemnation from right-wingers very seriously, given what right-wing pundits say on a daily basis. But every creep I skewered or outraged in public now has the chance at a cheap revenge. Unfortunately, what I said in glib frustration didn't really damage the culture I was targeting, it just damaged my allies, my friends and the causes I struggle for.

There's probably some larger lesson about social media to be drawn here, and how its immediacy can be great in its power to connect us, but also a liability because something blurted out and not meant to be serious acquires a greater power. Then, an offensive joke can be seen as an ideological manifesto, gallows humor can be seen as a serious support for sexual assault. I only wish this had been apparent to me before I hit enter.

I hope that one day people will believe me when I say that I did not mean it and that it does not reflect who I am. I hope that people will take time to read my work and understand that I have spent my career taking a lot of heat for defending victims of all kinds, not just Arabs and Muslims. And I hope Ms. Logan and other victims of sexual violence will one day forgive me for my terrible mistake.

Nir Rosen is a freelance writer, photographer and filmmaker who has worked in Iraq, Afghanistan, Pakistan and Somalia. He is the author of “In the Belly of the Green Bird: The Triumph of the Martyrs in Iraq."

Nir Rosen is a freelance writer in Iraq.