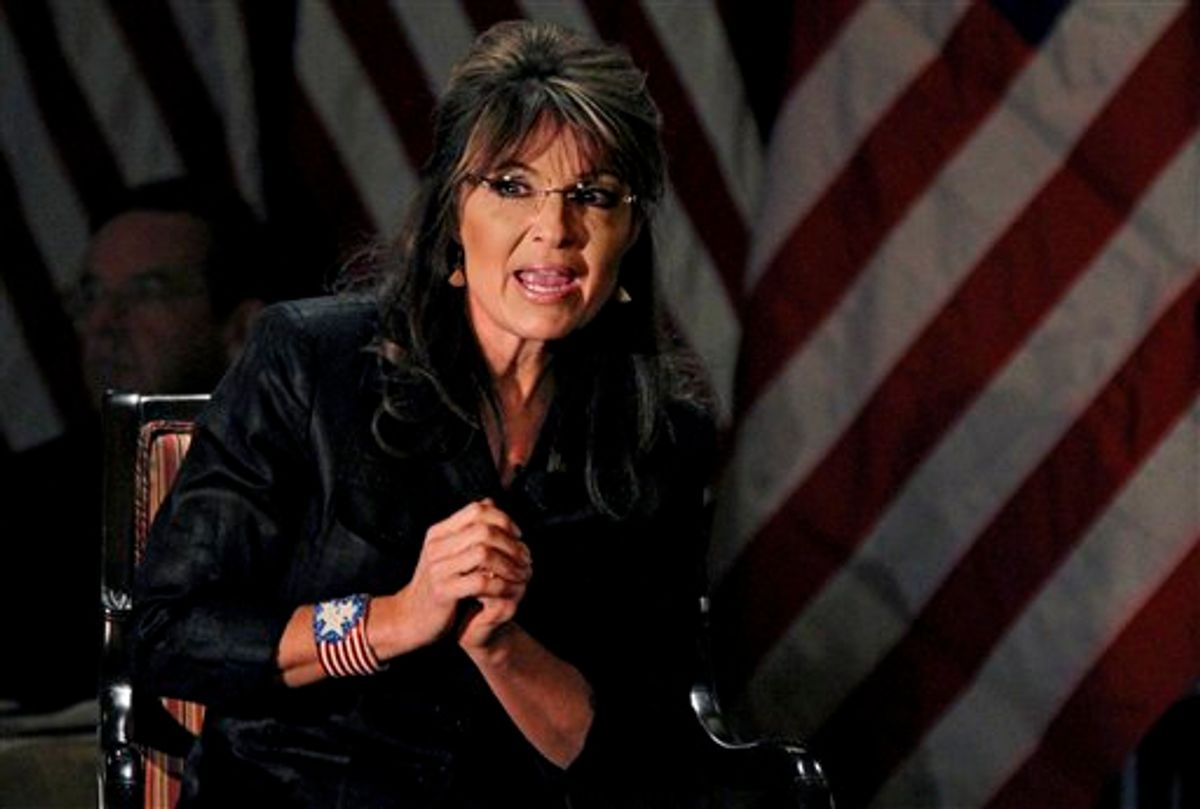 Sarah Palin is still thinking about running for president in 2012. She said there should be no new gun control measures enacted because of Arizona Rep. Gabrielle Giffords' shooting.

She stood firm in her claim that President Barack Obama's health care reform effort could lead to "death panels." And she poked at first lady Michelle Obama for urging new mothers to breast feed.

The former Republican vice presidential candidate and Alaska's ex-governor sat for a wide ranging interview Thursday at the annual meeting of the Long Island Association, a business group outside New York.

Palin agreed to an unscripted question and answer session with the association's president, Kevin Law, who pressed her on gun rights, her potential presidential aspirations, her propensity for communicating through Facebook and her role as a contributor on Fox News.

Reporters were permitted inside to cover the New York event, unlike many Palin speaking engagements where reporters have been banned.

It was Palin's first major public appearance since Giffords was critically wounded and six people were killed at an event in her Tucson, Ariz., congressional district. Palin came under withering criticism following the shootings because she had published campaign literature advocating the ouster of Giffords and other House Democrats by placing their districts in the crosshairs of a gun.

Law asked Palin if she would support efforts to restrict semi-automatic weapons or multi-bullet clips.

She added, "Prayers should continue for the full recovery of Gabby Giffords and others who were involved in such a tragic, tragic event."

Palin said she was still thinking about running for president in 2012 and predicted an unconventional Republican contest in which social media would play a pivotal role.

"That's what going rogue is all about," Palin said, referring to the title of her best-selling memoir.

Asked who should lead the GOP ticket, Palin was vague but playful.

"No one is more qualified, really to multi-tasking and the things you need to do as president than a woman, a mom," said Palin, who has five children including a toddler with Down syndrome.

Palin criticized Obama on a range of issues, from his handling of the recent democratic uprising in Egypt to his latest budget proposal, which she said would do little to close the deficit. She claimed the press had been complicit in allowing Obama to claim that his budget did not add to the national debt.

"Criticism of press is what I do," she said.

She also praised the tea party movement, saying it had "forced both parties to rethink the way they do business."

Palin said the landmark health care bill Obama signed into law last year gave her heartburn. She also defended her much-criticized claim that the law would lead to federal "death panels" determining who would receive care.

She said: "My question was, who are these faceless bureaucrats on a panel who will decide? Will it be my baby with Down syndrome, who maybe somebody may judge him as not having that level of productivity somebody else may have. So maybe if rationed care is part of this, maybe he wouldn't receive the care."

Palin also noted the recent increases in the price of food and mocked Michelle Obama to make her point. The first lady is encouraging mothers to breast feed their infants as part of her campaign to reduce childhood obesity -- an effort that has drawn scorn from some conservatives.

"No wonder Michelle Obama is telling everybody you better breast feed your babies," Palin said. "I'm looking and say, 'Yeah, you better because the price of milk is so high right now.'"

The business-oriented attendees welcomed the speech even in densely populated, Democrat-tilting suburban area.

"I think the reaction from everyone here today was very positive," bank executive Sallyanne Ballweg said. "She was reflecting a lot of things on people's minds in terms of the economy and job creation. I think she balanced it with her own sense of humor."