Paul Ryan: "It's like Cairo has come to Wisconsin"

As protesters swarm the state capital, a GOP legislator sees echoes of the Egyptian revolution. Huh? 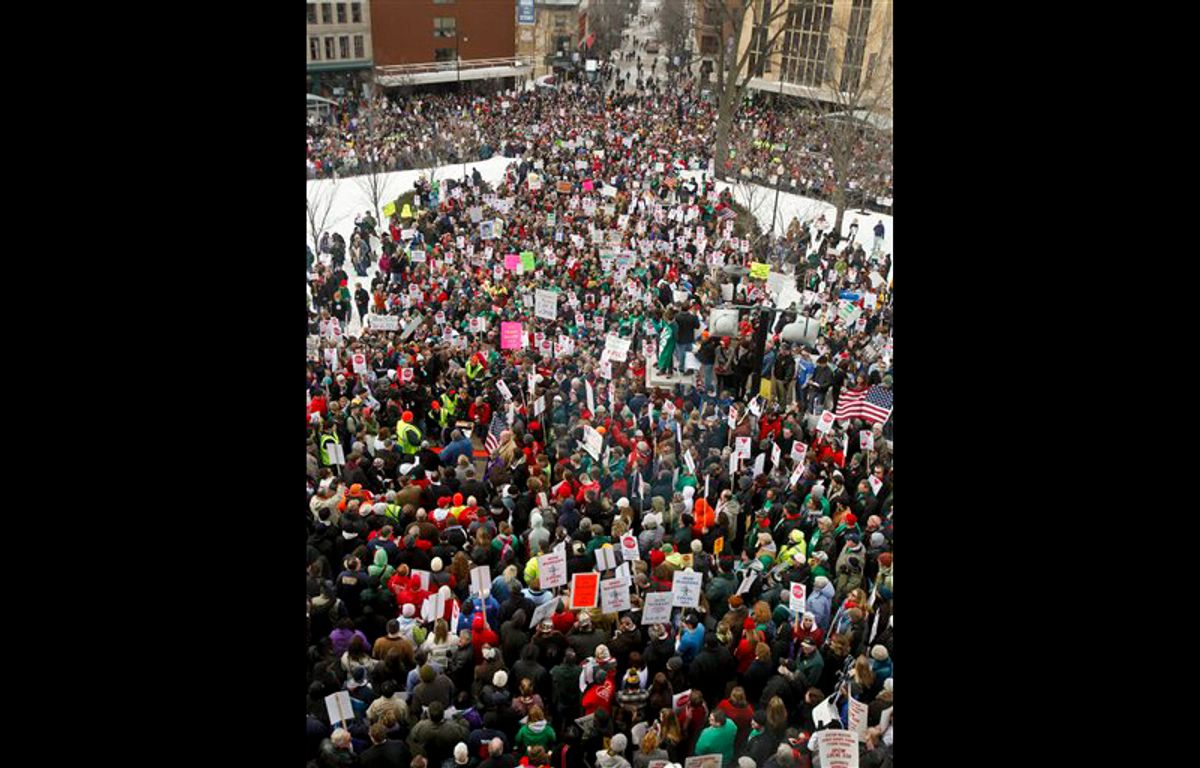 Rep. Paul Ryan, R-Wis., seems to be doing his best to convince the general public that he -- hmm, how to put this politely? -- just isn't very smart. On Wednesday, he attacked President Obama for ignoring the deficit-reducing recommendations made by the president's fiscal commission. But Paul Ryan was on the commission, as Jonathan Chait points out, and he voted explicitly against endorsing the commission's proposals. That makes no sense, to put it mildly.

On Thursday morning Ryan topped that headscratcher with a real doozy: He compared the protests currently raging in Wisconsin over Gov. Scott Walker's plans to crush public sector unions to the upheaval that brought down President Mubarak in Egypt.

From the National Journal:

"State workers who have extremely generous benefits packages, [Walker's] asking that they contribute 12 percent to their health care packages. It's not a lot, it's about half of what private-sector employees pay, and he's getting riots. It's like Cairo has come to Wisconsin," Ryan said. "People should be able to express their way, but we've got to get this deficit and debt under control in Madison."

We'll save for later a discussion of whether requiring an elementary school teacher to take what amounts to a 7 percent pay cut is the appropriate way to deal with a budget deficit, or whether there is even a fiscal crisis in Wisconsin in the first place. (Although it is worth noting what Ryan didn't mention, which is that the attempt by Walker to revoke public sector union collective bargaining rights is a crucial part of the drama.) The really nutty undercurrent to Ryan's comparison is the premise that the Cairo protests were a bad thing, or, at the very least, that the spectacle of watching Americans protest like Egyptians is unseemly and should be deplored. I'm sure he didn't say anything of the sort when Tea Partyers were marching on Washington.

I'll admit, all week I've been thinking that attempts by the protesters to cloak their struggle in Egyptian metaphors -- dubbing the governor Scott "Hosni" Walker, or calling for Wisconsin citizens to "fight like an Egyptian" -- were a bit of a stretch. Harold Meyerson was funny when he called Walker the "cheesehead pharaoh of Wisconsin," but there's still a qualitative difference to the struggle against an oppressive dictator who commanded the full power of a police state and a fight over how to pay for pension benefits. (Although, come to think of it, legendary lawyer and union advocate Clarence Darrow would probably disagree.)

But when a Republican legislator voluntarily places his own party in the position of Mubarak, you have to wonder what's in the tea these people are drinking. Yes, yes, I know conservatives are worried that democracy in Egypt could lead to the Muslim Brotherhood taking power. But to the vast majority of people on this planet who paid attention to what happened in Egypt, the protesters were the good guys and Mubarak was the bad guy. The sight of people gathering peacefully in Tahrir Square was incredibly inspiring.

Ryan sees riots and Cairo-style destabilization in the masses who have risen up in Wisconsin. But that's not what Democrats and union members and Americans who don't share the Tea Party ethos are seeing. They're seeing the dramatic, exciting beginning of a pushback against Republican over-reach. If Paul Ryan thinks it looks like Cairo, well then, maybe he's right.