PC Air hires "ladyboys" to do the job. Plus: JAL brings back its classic crane 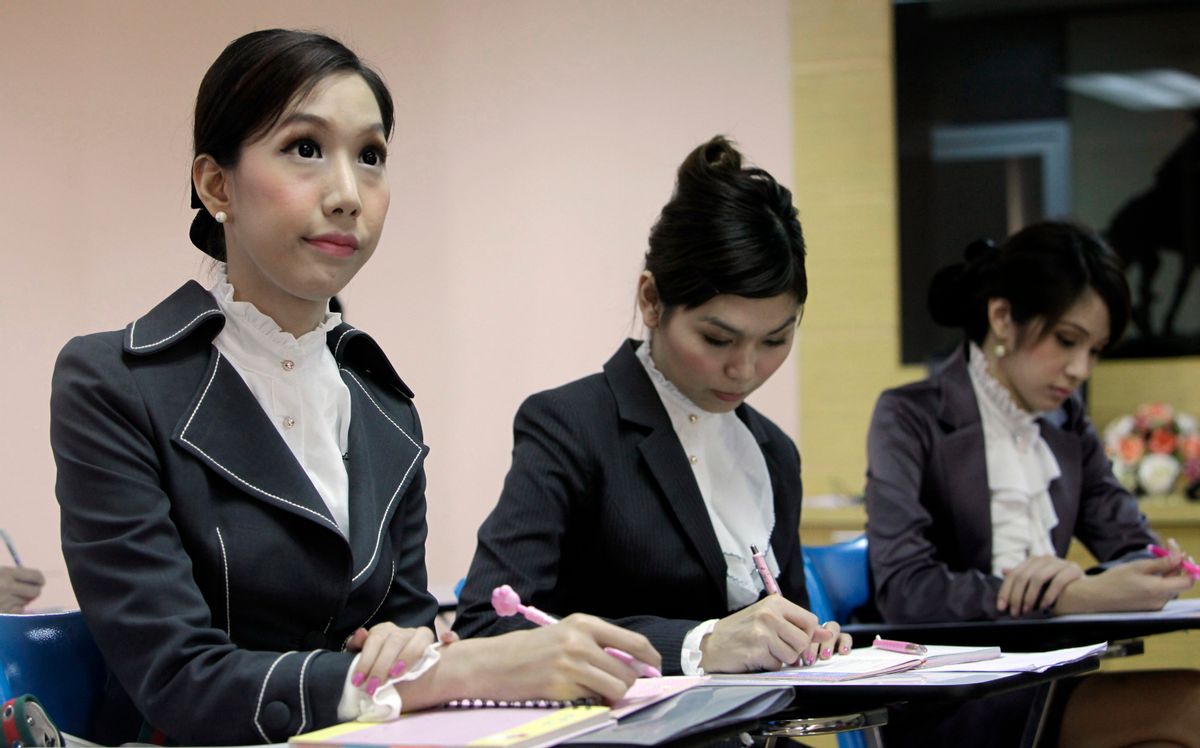 TO GO WITH STORY : THAILAND TRANSVESTITE BY THANYARAT DOKSONE - In this Wednesday, Feb. 9, 2011 photo, from left to right, transvestites Chayathisa Nakmai, Nathatai Sukkaset and Dissanai Chitpraphachin take a makeup training course, as part of the preparations for the inaugural flight of P.C. Air headquarters in Bangkok. The Thai airline is the first air company that recruited transvestites as flight attendants. (AP Photo/Sakchai Lalit) (Sakchai Lalit)
--

The big story in air travel this month is, of course, this one.

I'm talking about PC Air, an upstart charter company out of Bangkok that has decided to staff its cabins with transgendered flight attendants.

Transsexuals in Thailand are known as "ladyboys" or "katoeys," and as anyone who has been to Bangkok can attest, they comprise a surprisingly large and more or less mainstream portion of the population.

There are various ways we can take this conversation, most of them in questionable taste. I'm reminded of the "Tranny World Airlines" advertisement in Kasper Hauser's parody SkyMaul catalog:  TWA offers "more flights to sex-reassignment surgery destinations than any other airline." And although every airline serves nuts, "not everybody has the balls to leave them in Thailand." The guys at Kasper Huaser were closer to the truth than they thought! Ding: "You are now free to use the ladies' room."

PC Air, by the way, takes its name from the carrier's non-transgendered president, Peter Chan. Thus, PC joins Laker, Lauda Air and Braniff, among a few others, in the small club of airlines named after the people who started them.

Apparently PC Air has no slogan. I think it also needs a name for its frequent flier club. That's where you come in. I may be getting myself into trouble, but I'm offering an Ask the Pilot T-shirt or baseball cap to the two best entries. The only rule is that your submission cannot contain the word "nuts." Send your ideas here.

Now, let's stay in Asia but change the subject entirely.

Some months ago we were talking about the woes of Japan Airlines -- not only its fiscal troubles, but the carrier's lamentable decision to retire its iconic crane logo, the "tsurumaru," pictured here.

"Since 1960 every JAL aircraft featured this stylized depiction of the crane," I wrote, "lifting its wings into the circular suggestion of a rising sun. It was, at least in my opinion, one of the most elegant corporate logos ever conceived. Alas, beginning in 2002 this ageless symbol succumbed to what is probably the most regrettable makeover in aviation history, replaced by something so awful that every JAL plane deserves to be concealed under a black tarp: a giant, blood-red 'rising splotch' oozing across the tailfin."

I noted that carriers have a habit of rebranding themselves upon emergence from bankruptcy. If and when JAL finally pulls out of its malaise, I mused, it could do worse than to resurrect its classic and beautiful bird.

A long shot at best? Well, according to a press release, the tsurumaru will indeed be returning to the tails of JAL jetliners starting in April.

I'd like to think I had something to do with this. Not bloody likely, but still a smart and courageous move on JAL's part. It is very rare for a major company to reinstall a previously discarded identity -- even if the rest of the new livery is a bit anemic.