Protests stretch from Morocco to Iran. Violence rages in Libya. Why is the U.S. media so focused on Bahrain? 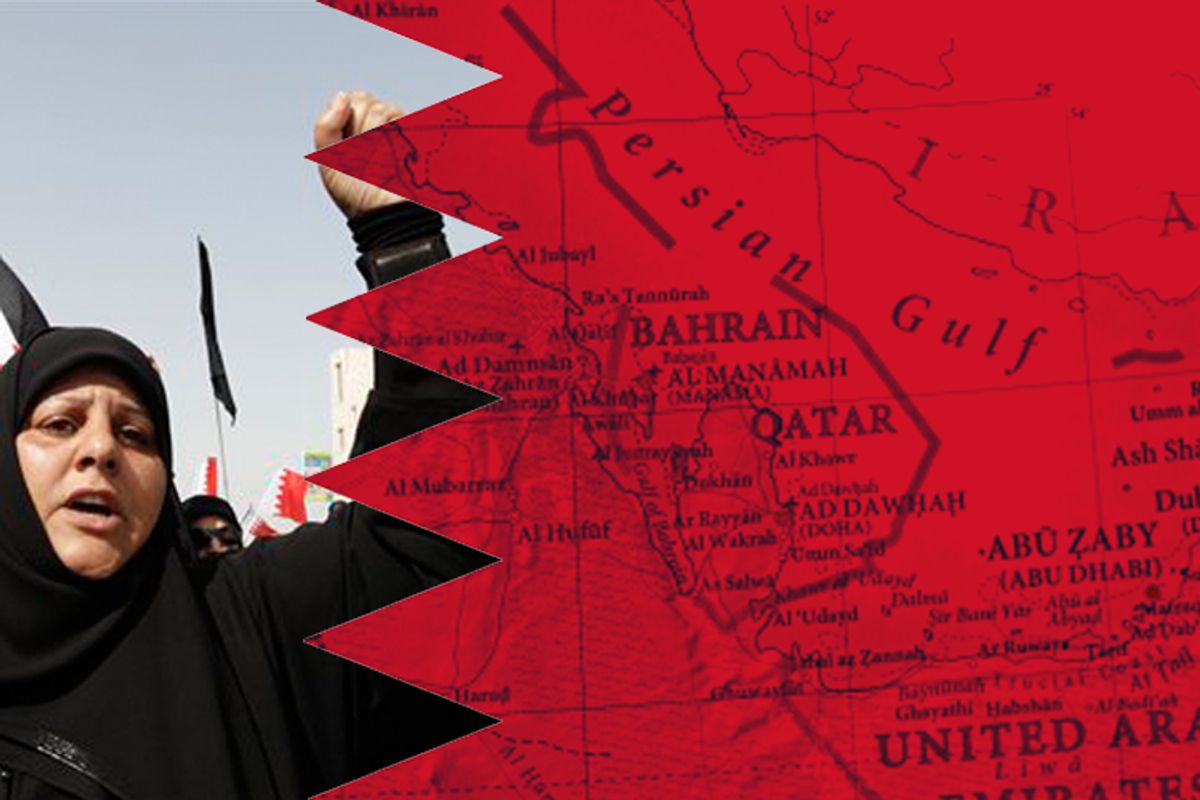 If you've watched TV news, you've seen images from the streets of Bahrain. (They look a lot like Egypt, only smaller.) If you're on Twitter, you might've seen a tweet or 20 about rubber bullets fired into crowds of sleeping protesters or tear gas tossed into packed hospital emergency rooms. If you read the Internet, you've probably seen hourly updates of the violence since the "day of rage" on Feb. 14. (At least five have died, and it looks like a truly awful scene.)

But what about the rest of the region? Libya had its own day of rage on Feb. 17, and the violence that resulted left dozens dead, a "massacre" says the Guardian. Demonstrations entered in their eighth day in Yemen -- four people died there today. Iranians fear civil war as anti-government protesters tear through Tehran. Algeria, Syria, Kuwait, Saudi Arabia, Djibouti -- almost every country in the Middle East is struggling to deal with similar chaos.

So why does the U.S. media seem so particularly focused on Bahrain? We reached out to Ellen Lust, a political science professor specializing in Middle East studies at Yale. With a background studying political participation and conflict in the Arab world, she e-mailed us with some insight into America's momentary fascination with Bahrain.

Bahrain is a monarchy in the Middle East that some Americans might not have heard of before this week. What makes it uniquely important to the U.S. and region?

Bahrain is small but strategically located in the Gulf.  The U.S. has a naval base there, which helps to explain its importance. It also has a predominantly Shiite population and has been ruled by a Sunni monarchy. The possibility that the monarchy may be overthrown and a regime come to power that is more sympathetic to Iran makes the U.S. and Gulf countries (including Saudi Arabia) nervous.

Were the Bahraini regime overthrown, what would be the consequences both for the region and for the U.S.? How likely do you think this is?

It's difficult to tell how likely the regime is to be overthrown. It certainly is a real possibility, and the regime feels insecure and is doing everything it can to fight back. The power of arms is with the regime; the power of people -- nearly 70 percent are Shiites -- is with the opposition.

The consequences, as stated above, are that the U.S. could lose one more of its stable, assured allies in the region, and Iran's influence could possibly spread. It disrupts the current power balance in a strategically important region. It is not a foregone conclusion that Bahrain would become anti-U.S. in the event that a new regime came to power. That regime, too, may need the resources and support that the U.S. can provide.

However, it is likely that the U.S. room for maneuver would be more limited. To some extent, this is inevitable. The region is changing, and the U.S. is going to need to find a new way to engage in the Middle East.

You wrote about the ripple effects of Tunisia and Egypt for the Los Angeles Times, and indeed they're felt across the region. However, attention seems to be directed towards Bahrain. Why? How justified is the one-revolution-at-a-time approach for the American pubic?

I'm not sure there is a "one-revolution-at-a-time approach." There are articles, for instance, in the New York Times today and yesterday that talk about unrest in the different parts of the region -- including Djibouti! It is certainly true that Bahrain is receiving a lot of attention, and I think this is for two reasons: first, because it causes a particularly difficult strategic dilemma for the U.S., and second, because the regime is being particularly repressive, which I think increases attention.

Is coverage of Bahrain disproportionate? Are other events in the Middle East more important right now?

I'm not sure I would say "disproportionate," since Bahrain is a truly important country for the U.S. However, the really significant point that can be missed -- and doesn't seem to be getting enough attention -- is that the entire region has changed for the U.S. Even if some of these regimes survive, their relationship with the people and our engagement with them will need to change. There needs to be a fundamental rethinking of U.S. strategy toward the Middle East.

Some of this rethinking will take place as the dust settles. However, our reactions to the crises now also sets a precedent for people in the region.

Do you think Americans are fatigued after Egypt? And Iran last year? Tunisia and Egypt fell off the radar pretty quickly ...

I do find it interesting how much less attention we are giving the events across the region. With eight countries (as I counted them today) experiencing unrest and Egypt and Tunisia far from settled, it's not surprising that no country is receiving the attention that Tunisia and then Egypt received. There is also a sense, however, that the unrest is almost becoming "normal." It no longer sends the shockwaves to Americans that it once did, and I think for this reason has become a little less followed.