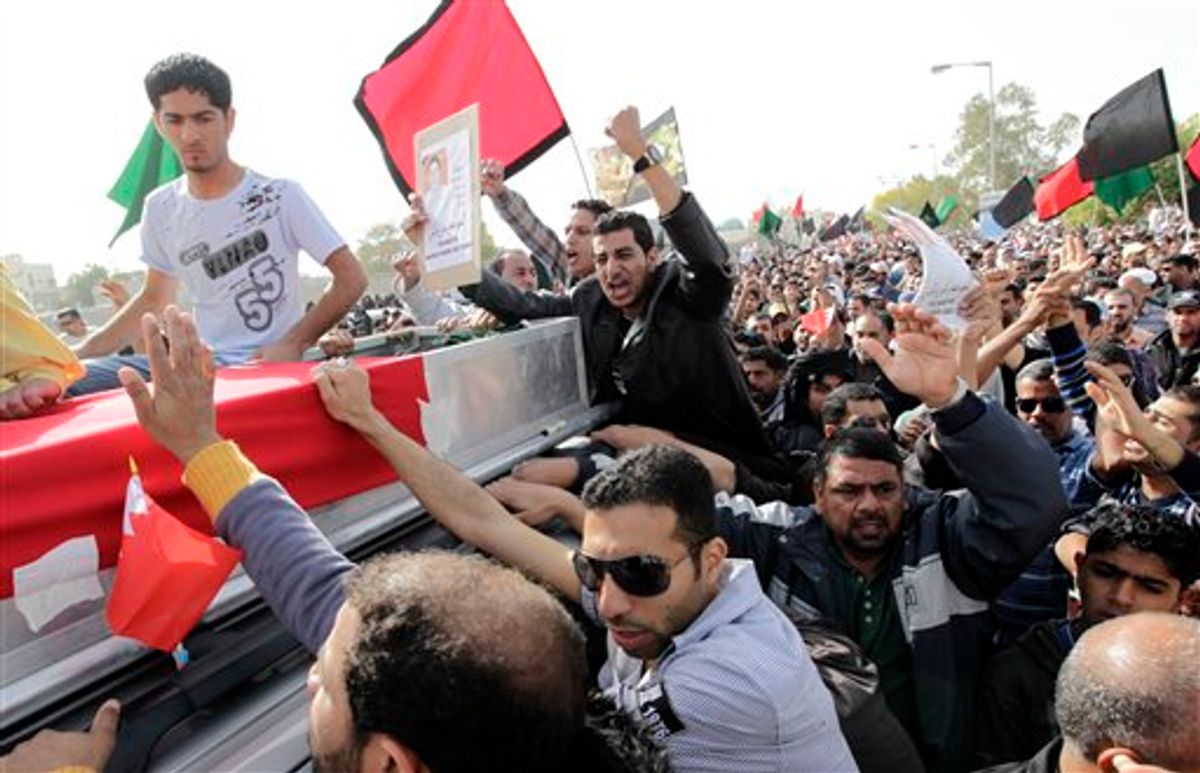 Soldiers opened fire Friday on thousands of protesters defying a government ban and streaming toward the landmark square that had been the symbolic center of the uprising to break the political grip of the Gulf nation's leaders.

Officials at the main Salmaniya hospital said at least 50 people were injured, some with gunshot wounds. Some doctors and medics on emergency medical teams were in tears as they tended to the wounded. X-rays showed bullets still lodged inside victims.

"This is a war," said Dr. Bassem Deif, an orthopedic surgeon examining people with bullet-shattered bones.

Protesters described a chaotic scene of tear gas clouds, bullets coming from many directions and people slipping in pools of blood as they sought cover. Some claimed the gunfire came from either helicopters or sniper nests, a day after riot police swept through the protest encampment in Pearl Square, killing at least five people and razing the tents and makeshift shelters that were inspired by the demonstrators in Cairo's Tahrir Square.

An Associated Press cameraman saw army units shooting anti-aircraft weapons, fitted on top of armored personnel carriers, above the protesters, in apparent warning shots and attempts to drive them back from security cordons about 200 yards (200 meters) from the square.

Then the soldiers turned firearms on the crowd, one marcher said.

"People started running in all directions and bullets were flying," said Ali al-Haji, a 27-year-old bank clerk. "I saw people getting shot in the legs, chest, and one man was bleeding from his head."

"My eyes were full of tear gas, there was shooting and there was a lot of panic," said Mohammed Abdullah, a 37-year-old businessman taking part in the protest.

The clash came hours after funeral mourners and worshippers at Friday prayers called for the toppling of the Western-allied monarchy in the tiny island nation that is home to the U.S. Navy's 5th Fleet, the centerpiece of the Pentagon's efforts to confront Iranian military influence. Some members of Bahrain's Sunni ruling system worry that Shiite powerhouse Iran could use Bahrain's majority Shiites as a further foothold in the region.

The White House has expressed "strong displeasure" about the rising tensions in Bahrain.

Day by day, the crisis in Bahrain has deepened.

The cries against the king and his inner circle -- at a main Shiite mosque and at burials for those killed in Thursday's crushing attack -- reflect a sharp escalation of the political uprising, which began with calls to weaken the Sunni monarchy's power and address claims of discrimination against the Shiite majority.

The mood, however, has turned toward defiance of the entire ruling system after the brutal crackdown on a protest encampment in Bahrain's capital, Manama, which put the nation under emergency-style footing with military forces in key areas and checkpoints on main roads.

"The regime has broken something inside of me. ... All of these people gathered today have had something broken in them," said Ahmed Makki Abu Taki at the funeral for his 23-year-old brother, Mahmoud, who was killed in the pre-dawn sweep through Pearl Square. "We used to demand for the prime minister to step down, but now our demand is for the ruling family to get out."

At a Shiite mosque in the village of Diraz, an anti-government hotbed, imam Isa Qassim called the Pearl Square assault a "massacre" and thousands of worshippers chanted: "The regime must go."

In a sign of Bahrain's deep divisions, government loyalists filled Manama's Grand Mosque to hear words of support for the monarchy and take part in a post-sermon march protected by security forces. Many arrived with Bahraini flags draped over the traditional white robes worn by Gulf men. Portraits of King Hamad bin Isa Al Khalifa were distributed.

"We must protect our country," said Adnan al-Qattan, the cleric leading prayers. "We are living in dangerous times."

He denounced attempts to "open the doors to evil and foreign influences" -- an apparent reference to suspicions that Shiite powerhouse Iran could take advantages of any gains by Bahrain's Shiites, who account for about 70 percent of the population.

The pro-government gathering had many nonnative Bahrainis, including South Asians and Sunni Arabs from around the region. Shiite have long complained of policies giving Sunnis citizenship and jobs, including posts in security forces, to offset the Shiite majority.

Outside a Shiite village mosque, several thousand mourners gathered to bury three of the men killed in the crackdown. The first body, covered in black velvet, was passed hand to hand toward a grave as it was being dug.

Amid the Shiite funeral rites, many chanted for the removal of the king and the entire Sunni dynasty that has ruled for more than two centuries in Bahrain -- the first nation in the Gulf to feel the pressure for changes sweeping the Arab world.

"Our demands were peaceful and simple at first. We wanted the prime minister to step down,' Mohamed Ali, a 40-year-old civil servant, said as he choked back tears. "Now the demands are harsher and have reached the pinnacle of the pyramid. We want the whole government to fall."

In another funeral in the Shiite village of Karzkan, opposition leaders urged protesters to keep up their fight but not to seek revenge.

"We know they have weapons and they are trying to drag us into violence," said Sheik Ali Salman, the leader of the largest Shiite party, Al Wefaq, whose 18 lawmakers have resigned in protest from the 40-seat parliament.

On Thursday, Bahrain's leaders banned public gatherings. But the underlying tensions in Bahrain run even deeper than the rebellions for democracy that began two months ago in Tunisia and later swept away Hosni Mubarak in Egypt and are challenging old-guard regimes in Libya and Yemen.

Foreign Minister Khalid Al Khalifa said the crackdown was necessary because the demonstrators were "polarizing the country" and pushing it to the "brink of the sectarian abyss."

Speaking to reporters after an emergency meeting with his Gulf counterparts in Manama, he called the violence "regrettable," said the deaths would be investigated and added that authorities chose to clear the square by force at 3 a.m. -- when the fewest number of people would be in the square -- "to minimize any possibility of casualties."

Many protesters were sleeping and said they received little warning of the assault. More than 230 people were injured, some seriously.

In Geneva, Navi Pillay, the U.N. High Commissioner for Human Rights said the response of some governments in the Middle East and Africa to the demands of their people was "illegal and excessively heavy-handed," and she condemned the use of military-grade shotguns by security forces in Bahrain. The European Union and Human Rights Watch urged Bahrain to order security forces to stop attacks on peaceful protesters.

U.S. Defense Secretary Robert Gates said Washington must expand efforts for political and economic reforms in places such as Bahrain. "There is an urgency to this," he told the Senate Armed Services Committee.

The cable includes questions about relationships between the princes, their influence on government, views of the United States and whether any of them have histories of drug or alcohol use. There is no record of any answers.

The protesters had called for the monarchy to give up control over top government posts and all critical decisions and address deep grievances by Shiites, who claim they face systematic discrimination and poverty and are blocked from key roles in public service and the military.

Shiites have clashed with police before over their complaints, including in the 1990s. But the growing numbers of Sunnis joining the latest demonstrations surprised authorities, said Simon Henderson, a Gulf specialist at the Washington Institute for Near East Policy.

"The Sunnis seem to increasingly dislike what is a very paternalistic government," he said. "As far as the Gulf rulers are concerned, there's only one proper way with this and that is: be tough and be tough early."

The Bahrain violence forced the cancellation of a lower-tier open-wheel race in Bahrain for Friday and Saturday, and leaves in doubt the March 13 season-opening Formula One race at the same track.

Formula One chief Bernie Ecclestone said he will decide next week whether to proceed with the race. On Friday, he said he hoped the unrest "all blows away" so the event can be run as scheduled.

"Let's wait and see because we don't know what the protests are really about. We've never -- ever, ever -- been involved in religion and politics and we don't make decisions based on those things," Ecclestone told the BBC. "Because people (were) killed, nobody's happy with that I'm sure. In these parts there have always been skirmishes, so let's hope it's no more than that."

Barbara Surk in Manama and Brian Murphy in Dubai, United Arab Emirates, contributed to this report.