America: It's time to win the future (of cooking vegetables)

Meat debauchery was so 2010 (and every year before that). Chefs are having fun with vegetables, and you can too 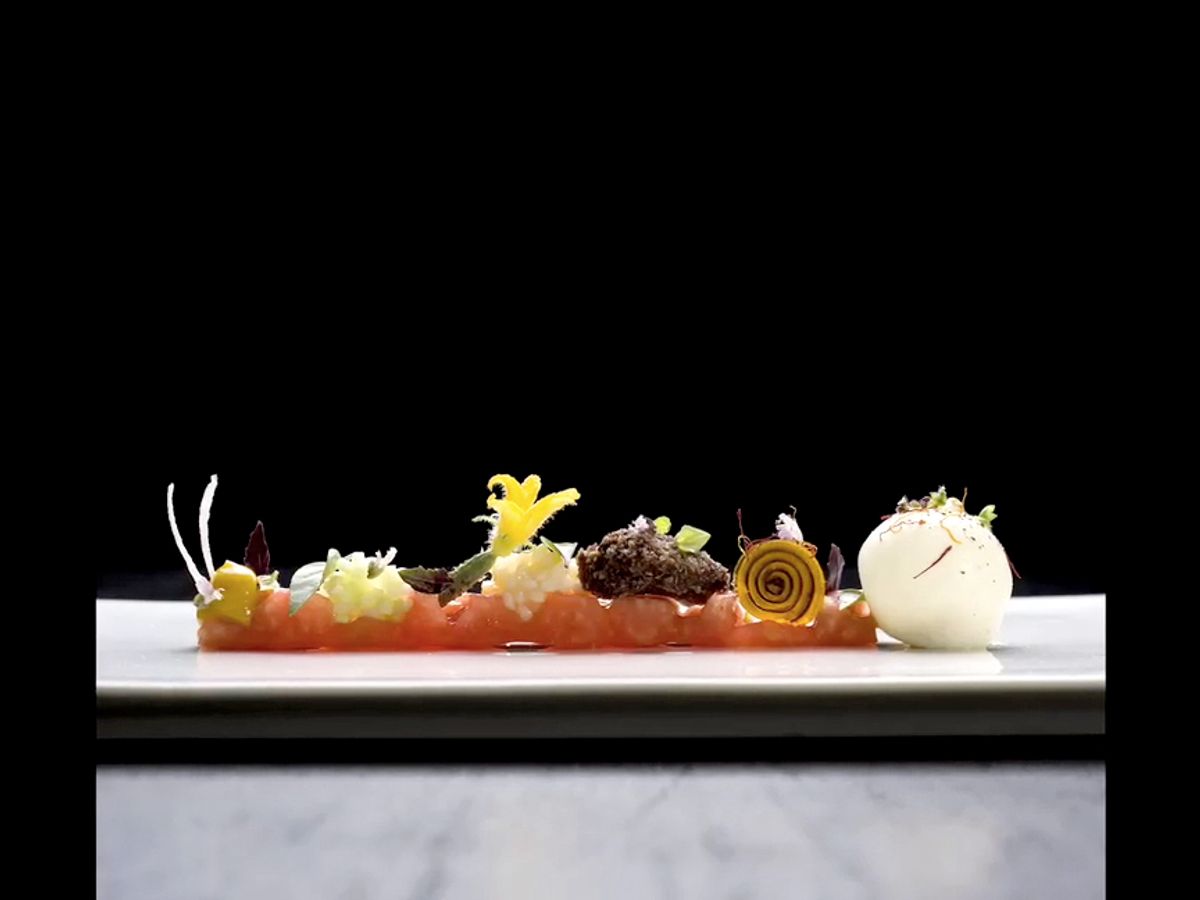 Tomato, Many Complementary Flavors from the restaurant Alinea
--

I've heard it and read it -- and said it myself -- over and over: Vegetables will be the hot food trend in 2011. Of course, I say that with the wincing pain that comes with the knowledge that the words leaving your mouth sound stupid. I mean, it's like saying air will be the new hotness in breathing. But here's the thing: Despite our ever-increasing culinary sophistication and our interest in vegetarianism, veganism and just plain-old eating less meat for health or environment or whatever, Americans have most assuredly not won the future on the creative, enthusiastic cooking of vegetables. Yet.

Somewhere between the greens and beans of the old-time South to hippie-dippy nut loaves and the microwaved on-the-go Gardenburgers, we seemed to have lost our way. As meat got cheaper and cheaper, it went from an occasional (and seasonal) luxury to the center of our diets ... and the center of our food culture. We became, as Elissa Altman put it on her blog Poor Man's Feast, a nation of "vegetable idiots ... Vegetables are simply not a part of the American culinary lexicon: give a man a kohlrabi and he won’t know what to do with it. Give a man a steak, and he will."

It's a sort of instructive irony that nowhere is this more apparent than in the diets of millions of vegetarians and vegans. How many hours have I spent with vegetarian friends in the frozen food aisle comparing various texturized vegetable protein "burgers"? (I do actually kind of love veggie burgers; the fake-meat technology in Taiwan is amazing.) When Oprah challenged her entire staff to go vegan for a week, one of her editors came up with a helpful list of tips on what to eat. Suffice it to say that "veggie meat crumbs," "soy butter," and the abominable phrase "vegan mayo" are well-represented.

I don't particularly have anything against these things, not any more than any other processed food product, but their popularity illustrates Altman's point. Even for many vegetarians, the challenge of eating is often about how to replace the meat on the plate, not focusing on the delicious, inspiring possibilities of vegetables themselves.

I love meat. I love eating it, cooking it, smelling it, looking at it. But I realized something funny while I was in culinary school, when people asked me, all the time, "What's your specialty?" I had nothing good to say to that, since I was really just trying to learn how to cut a perfectly straight julienne and what they wanted to hear was, "Tsarist Russian banquet cuisine" or something. But after a while, I surprised myself by answering, "I love cooking vegetables."

And as an enthusiastic, wide-eyed cook, I was so often surprised by the vegetables, with their incredible range of flavors and textures. Think of the difference between mashed potatoes and a crisp chip. Of the difference between a bright, raw, juicy slice of tomato and the dark, chewy flavor of tomato paste. (Or of this ratatouille's insane tomato jam.) You fry a chicken, you roast a chicken, and it still tastes like chicken. But you cut a head of lettuce into a salad and you braise another down to silky tenderness, and it's hard to believe they started out as the same thing.

With that kind of astonishing range locked in every vegetable, and boundary-pushing dishes like "Tomato, Many Complementary Flavors" (pictured above, with some of those complementary flavors provided by curry pudding, olive-chile-garlic crumbs, a spiral of molasses and saffron gelee, and a literal balloon of mozzarella filled with clarified tomato juice), from the genius chef of Alinea, Grant Achatz, it's no wonder after a few aggressively porky years, high-flying chefs -- and the dining public -- are getting more excited about what they can do with stuff that comes up out of the ground. John Fraser, an alumnus of the celebrated French Laundry, dedicates Monday nights in his restaurant Dovetail almost entirely to vegetable cooking. David Chang, who's built an empire on pork belly and whose Momofuku Ssäm Bar menu for years notoriously noted that the restaurant was not vegetarian-friendly, recently traveled to Korea to experience the art of Buddhist vegetable cooking for inspiration.

And that sense of liberated creativity can happen in your own home, even if you aren't a culinary genius. It's really just a matter of trying out pairings of techniques and vegetables you may have never played with before. I remember, a mere five years ago, when I served someone roasted broccoli and it blew her mind; it never occurred to her that you didn't have to steam it. Hell, I remember when seeing roasted broccoli blew my mind, and really it wasn't that long before that. Or when I discovered you could throw some just-cooked peas in a blender, add a little bit of stock, maybe some herbs, and have yourself a fist-pumpingly good pasta sauce. Or when I had no idea how to cook Jerusalem artichokes, only figuring that they kind of looked and felt like potatoes, so I boiled and roasted them like I would potatoes to great success and hugs and kisses from friends.

So it's time, people. Time to start playing with your vegetables. What new, or new-to-you things do you like to do with them? Share with us in the comments!