Why FDR would support the Wisconsin protests

A labor historian explains: Roosevelt opposed government unions, but by the '50s he would have changed his mind 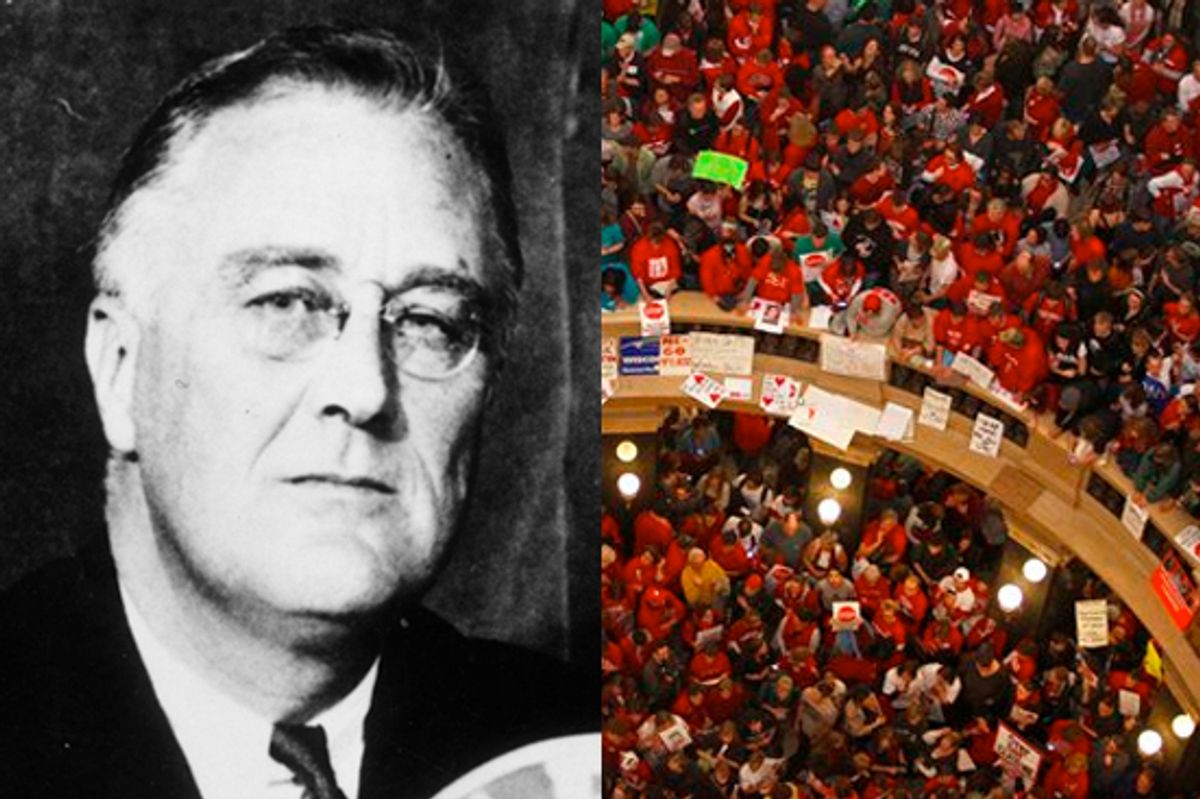 Most observers of the political scene have been stunned at the ferocious protests erupting in response to Wisconsin Gov. Scott Walker's attempt to take collective bargaining rights away from public sector workers. Suddenly, everyone sees the clash as a pivotal test case. The right has wanted to break the power of public sector unions for decades -- if Walker can do it in a state with one of the proudest records of labor activism in the nation, it won't be long before dominoes start falling elsewhere.

The conservative argument is that government workers should have no right to extract wage and benefit concessions from the taxpayer, and the fact that they can do so at all is a relatively recent phenomenon that should be rolled back. Government unions didn't even begin to get collective bargaining rights until the late 1950s, and as right-wing bloggers never tire of pointing out, even as great a liberal as President Franklin D. Roosevelt is on record as opposing collective bargaining for government workers.

With Wisconsin making news, Salon decided to find a labor historian who could provide some context for this week's events. Georgetown University professor Joseph McCartin, author of "Labor's Great War: The Struggle for Industrial Democracy and the Origins of Modern American Labor Relations, 1912-21" and an expert in the history of public sector unions, spoke with Salon by phone on Thursday afternoon.

I was surprised to learn today that FDR opposed public sector unions.

The quotation you refer to is in a letter he wrote to a postal worker leader in the 1930s. It has been a bit blown out of proportion. Roosevelt absolutely did not favor collective bargaining for federal workers and especially did not favor the right to strike. But like many people, had he lived into the postwar era, he might well have changed his mind. Because a consensus developed pretty quickly after World War II that collective bargaining in the public sector was actually a positive thing. That consensus really took shape between the late '40s and '50s.

The arrival of collective bargaining in the private sector through the Wagner Act of 1935 and the solidification of unions in major industries led to a stabilization of labor relations by the 1950s. The dire industrial warfare that some people had warned would come about through the Wagner Act obviously didn't happen. Instead collective bargaining settled down into a rather routine process, in which major employers like U.S. Steel or General Motors actually found the process was a net positive for them. They elicited feedback from their workers, and they elicited a cooperative arrangement between the union and the company on the shop floor. For workers, that arrangement was governed by a contract that took some of the arbitrariness out of the relationship that had been there between workers and their bosses.

So collective bargaining basically was seen by both sides in the 1950s -- labor and management -- as a pretty good thing. You add to that the sensitivity that many Americans felt to the idea that some workers would be denied rights, and the fact that the union movement by the 1950s seemed less threatening, in general, in part because those elements of the labor movement that had been linked to the Communist Party in the 1940s had been pretty much marginalized or eliminated by then -- all those things came together to change opinions. Had Roosevelt lived into that period I'm pretty sure he would have changed along with people of both parties, Republican and Democrat, who generally gravitated in the direction that collective bargaining was a net good.

The right takes a much more cynical view. Their argument is that this all goes back to New York Mayor Robert Wagner figuring out in 1958 that he could lock down political support from government unions if he granted them collective bargaining rights -- and ever since then public sector unions and Democratic politicians have worked hand in hand.

That's not really an accurate representation. The main point that should be understood is that many cities had been informally negotiating with unions before they formally recognized them, beginning actually with Philadelphia even before New York. There had been a consultation relationship that existed to some extent in some cities. To argue that it was a cynical ploy, I think is wrong, because that eliminates the whole debate that was developing over the course of the '50s among people who had no stake in this politically. Experts on public employment and employment management -- the sort of cutting-edge thinking in the '50s by public sector managers was that bargaining would actually help them gain efficiencies and help them improve worker morale, cut down on turnover and generally foster a better workplace, a more effective workplace. Wagner was hardly just trying to make a cynical political power grab; there was a generally emerging body of thought that said this is good government.

And I think that body of thought was generally right. Because what happened for the most part over the next 20 years was that collective bargaining worked pretty well in the public sector. The fear-mongering that broke almost immediately when Mayor Wagner signed that act in 1958 never played out.

It's a significant difference and it is a difference that entails certain political sensitivities. It's easier for the public to support a striking auto worker than it is a striking sanitation worker who is not picking up your trash. However, if you look at the rise of public sector unions throughout the '60s and up through the mid '70s, there was general public sympathy for them and that sympathy grew out of the fact that when you looked closely you could see that public sector workers were not paid as much as their counterparts in the private sector, and especially when you compared them to private sector union workers, they lagged behind.

That same sympathy doesn't seem to be as widespread today. What changed?

A lot of this was really produced by the events of the last few years. There was a tremendous loss in the stock market that left a lot of pension funds looking underfunded, and that set off a lot of alarms in people. Now I'm not going to say that there aren't some workers in some places that have gotten some pensions that aren't really fully justifiable but that is different than saying that the whole principle of collective bargaining is wrong.

But an even more important factor is basically a 20- or 30-year period of failure in the private sector. What we are really looking at here is a private sector that for quite a long time now has not generated a lot of rising income for the great majority. It has not generated stable benefits for its workers, it has not generated increasing retirement security -- in fact we've had income stagnation or decline, we've had rising indebtedness, we've had growing insecurity for retirement. The private sector has failed on a massive level. And the tenuous position that so many American workers find themselves in as a result of that now makes it suddenly appear that public sector workers are just living off the fatted calf. I think some of it has to do quite simply with the way in which so many nongovernment workers have been suffering, and legitimately so. You can go to those folks and say: Why are you paying for the pension of the guy down the street? You don't have one!

That seems to be a real political liability for public sector unions.

It is a real liability, but it is liability that is not the result of union munificence, or that came from squeezing the taxpayers; it is a liability that basically flows from the fact that the private sector has done so poorly at creating a really broad growing thriving middle class in the past 20 years. And without a broad growing, thriving middle class, government workers are increasingly isolated and increasingly under threat and it is easy to play the dynamic this way, unfortunately for them.

What do you think of how this has all blown up in Wisconsin in the last few days?

Well, it's hard to know yet how this will turn out. I've been amazed at the level of protest that is now developing around it. It could be that the effort to actually take collective bargaining away from people will be seen for what it is -- it's not really a budget-solving move, as much it is a raw political power grab, quite simply to basically say we are going to destroy this wing of the labor movement. Maybe folks will see it for what it is. It's not clear how this will go. Certainly there are folks poised to go in a similar direction in Ohio and elsewhere.