Why does Mike Huckabee love Israel so much?

Because of the Antichrist 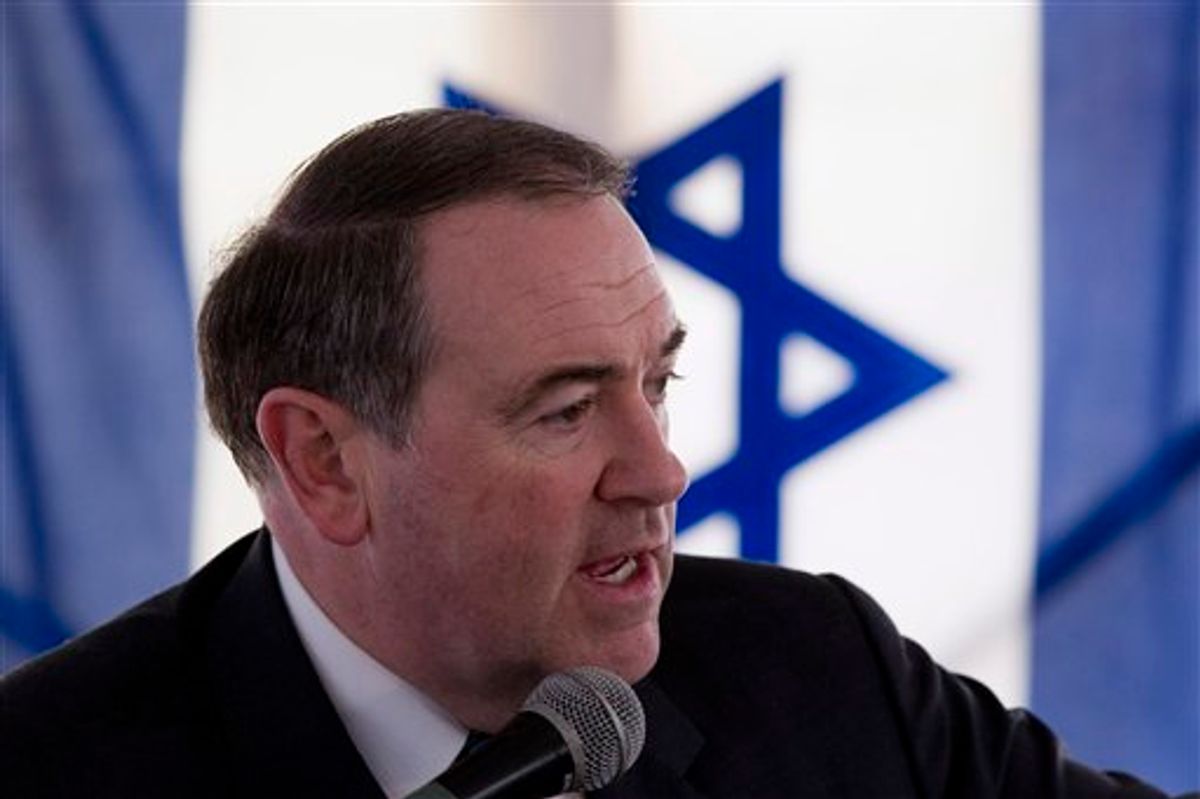 With an Israeli flag in the background, former Arkansas Gov. and Republican presidential contender Mike Huckabee speaks in Beit Oron, east Jerusalem, Monday, Jan. 31, 2011. Likely 2012 U.S. presidential contender Mike Huckabee says preventing Jewish settlers from building in east Jerusalem is as outrageous as discriminating against Americans because of their race, language or religion. Huckabee spoke at the dedication of a new Jewish neighborhood in east Jerusalem, which is claimed by the Palestinians. (AP Photos/Bernat Armangue) (AP)
--

Every Republican presidential contender visits Israel, because it's basically America Junior and we need to protect that wealthy nuclear power from the scary Arabs and Persians, but only Mike Huckbaee acts like he totally wants to live there.

Ben Smith writes in Politico about Huckabee's attachment to Israel, which is sincere and deep. He first visited as a teenager, and now he basically goes all the time:

Huckabee, an ordained Southern Baptist minister, visited Israel next in 1983 and soon began bringing members of his congregation along. Now when he goes, he simply e-mails his list. This year, 180 signed up to ride with him on tour buses around the country for a broadened traditional Christian tour that takes in Bethlehem and Nazareth, as well as Jewish sites such as Masada and the Holocaust museum. His family business, the MDH Group, serves as tour operator, charging $4,479, everything included.

Of course, his trips are not solely religious: He's also meeting with Benjamin Netanyahu, who is basically betting on the return of Likkud-friendly Republicans to power in the United States. Huckabee is strongly pro-settler and anti-Palestinian state.

Here's what Smith doesn't mention until the end of his piece: Huckabee's stance on Israel in not solely political.

Huckabee is not just moved by the inspiring story of the Jewish people. His support for the Jewish State is tied up in his apocalyptic religious beliefs. He's had the "Left Behind" nut on his show. Huckabee is an evangelical Christian -- he loves Israel because he associates it with the coming of the End Times. He supports the most right-wing elements in Israeli society because he believes that "half way through the Great Tribulation, Antichrist will enter the restored Temple and declare himself to be God."

("Huckabee wouldn’t directly describe his view on that belief but dismissed it as irrelevant," Smith says.)

Smith notes Huckabee's lack of ties to American Jewish groups, and says that the trips aren't based around a potential 2012 run. "Huckabee isn’t getting any votes in Israel," he writes. (Although, are we sure about that? Thousands of Israelis have dual United States citizenship and vote in presidential elections.) But the trips do deepen Huckabee's already strong attachment to the American evangelical Christian community, which is a decidedly influential force in Republican primary elections. The GOP establishment is not a big fan of Pastor Huckabee, but he's a thousand times more charismatic than Mitt Romney and has a huge base of support.

Perhaps he is the man who can lead America during the forthcoming war of Gog and Magog.