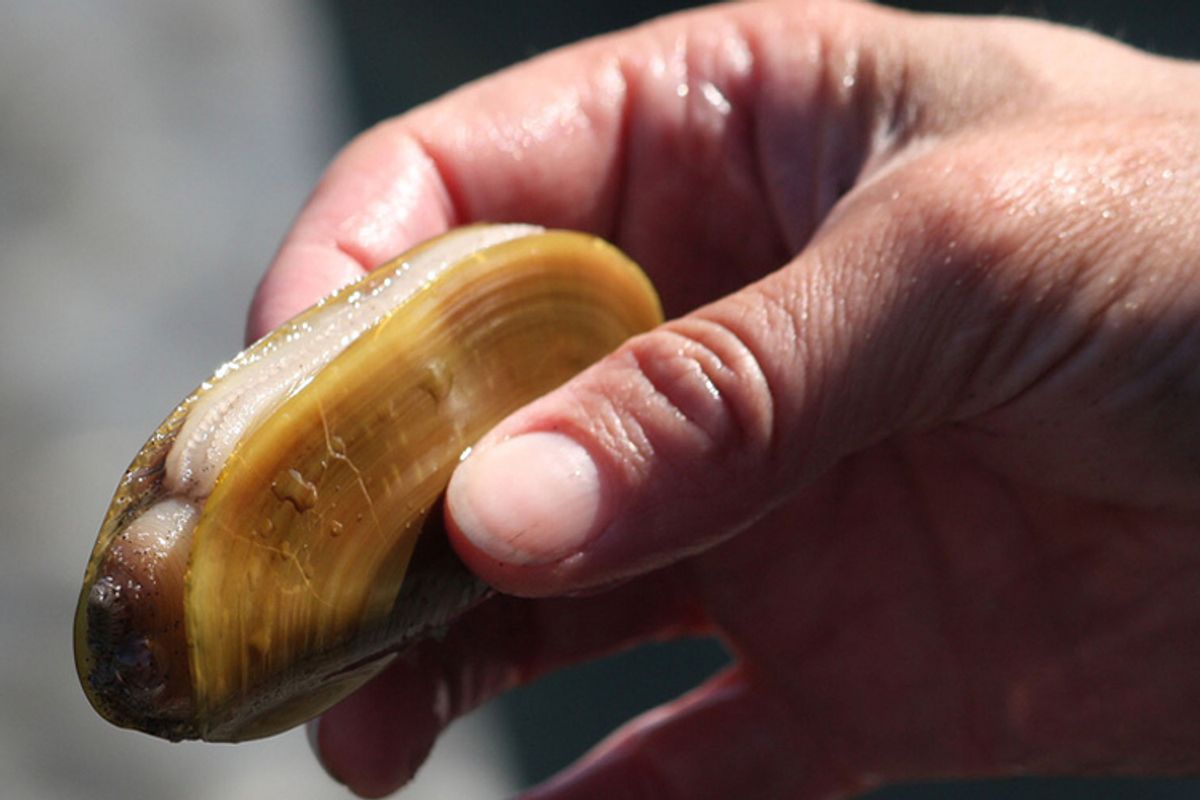 So here are some tweets from this week, from longtime restaurant critic Gael Greene and NBC's thefeast.com food editor Matt Duckor:

Gael Greene We had razor clams three nights in a row last week. John Dory, Bar Basque, Dressler. Good but not a match for Esca's.

And this is what I tweeted in response:

Gael and Matt know their bidness. Not trying to call them out on anything. It's their job to report trends and identify them; they do it well. They didn't determine the way Americans -- and to a certain extent postmodern foodies around the world -- dine. This is just how they found it. And you may think, "Eddie, why would you care if razor clams are a trend or not? Let 'em eat razor clams!" But, see, as a chef and a person who cares about food and cares about culture, it's not that simple.

From skate to pork belly to razor clams, there's always something that's priced reasonably, previously ignored, and able to fill a role on a menu. That's where these things start. Your purveyor comes to you with a new product, say, Mangalitsa pork, and asks you to try it. It was almost extinct in Hungary as a lard animal but now they want you to experiment with it. There's an introductory rate. The pig really isn't good for much but lard, yet you can charge a premium for the experience and novelty. Call it "Kobe pork!" While the purveyor is showing it to you, he's showing it to five other chefs in your neighborhood: Boom. We have a trend.

The Mangalitsa isn't a bad product. It's interesting. I'd like to spend some time with it, slowly integrate it, and figure out how to deliver it at a fair, sustainable price so it isn't here today, gone tomorrow on my menu. Am I selling a trend or selling a good dish? By the time you cycle through those thoughts, Mangalitsa prices go up for a season, then they level out. But by the time it levels out, the eating public is bored. They just paid $30+ for a Mangalitsa pork experience that doesn't really outdo your average Berkshire, which is known, widely available, quality pork. But the bigger issue is that chefs are coming up with specials and pushing trends before truly understanding the product, because they don't have to. The novelty sells itself.

It's a disservice to the product and the eating public. I'm sure Mario Batali knows exactly what to do with cannolicchi (razor clam) and ditto for April Bloomfield with Mangalitsa, but they aren't the problem. It's the copycats, it's the people who are expressly selling the "trend." They produce cheap knockoff interpretations or, worse yet, drop razor clams on some stupid farm-to-Brooklyn-to-table restaurant that thinks cooking simply involves buying a new locally sourced ingredient and putting some pink sea salt on it. There's no craft. ("Just taste the simplicity, the essence, the natural flavor!" No, asshole, COOK it.)

You know what happens when you sell trends? You sell crap. I've been guilty of this myself. People wanted Cheeto fried chicken from reading my blog, a lot of people were mashing up Asian/Down-Home American, so I got caught up in a trend and introduced some crappy items at [my now-closed restaurant] Xiao Ye. I didn't intentionally sell garbage; they were just crappy because I didn't take the time to really understand what I was trying to do. It happens. No one's perfect. Live and learn.

But razor clams aren't a "trend." You've been able to find them, for cheap, all around Chinatown or Italian neighborhoods for decades. Just look at the search results for "razor clams" on Yelp, it's a who's who of Chinese, Korean, Italian and then Eater Top 38 restaurants. They are on lowly Chinese diner-type menus such as Wo-Hop, but once the PAC (People Above Canal Street) play it out, the price goes up and you may see it disappear from certain menus never to come back. You have to realize, it may only take New Yorkers five months to cycle through a food trend like Mangalitsa or razor clams, but that's just the beginning. You find it in D.C., Philly, Boston, Miami, Seattle, Portland, Austin ... God, and at some point dare I say, it'll be in my hometown, Orlando. Just like "the man" took the Black Eyed Peas from the underground and sold them back to us auto-tuned with a chick who should have been in the WWF, we are going to be buying back razor clams at $20 a pop in Chinatown soon. Which sucks, because we are the people who won't dismiss razor clams when they aren't hot on Yelp. It's not a trend for us, it's a staple.

It is better for food culture if we are slower to absorb new ingredients into the canon so that they have staying power. Despite everything you hear, the foodielution in America is still young and not all-powerful. I still somehow end up on dates with birds who only eat chicken (cannibals) and don't eat meat on the bone. There's a lot of work to do and we aren't even close. On the flip side are the line cooks from two- or three-star restaurants hanging out at my shop, Baohaus, cockfighting:

"Oh, dude, pork belly is so played out!"

You guys are a bunch of Zoolanders. People "in the scene" (puke) need to dig their heads out of their asses and understand that the rest of the nation still subsists primarily on ground beef and chicken breasts.

I'm not saying we should serve burgers and chicken breast, but if we look like a bunch of chickens with our heads cut off running from new ingredient to new ingredient and the public can't follow, well, then this whole exercise is just intellectual masturbation, 'cause there is no lasting effect on national eating habits, on getting people to be open-minded about what they eat. Maybe that isn't your concern, but everything is everything, and all this "sustainable" talk is for nothing because they're going to eat McDonald's ground beef until it kills us. We may go down with Mangalitsa saddle bags, but we're going down nevertheless. The rate of consumption during these trends is unsustainable for most products. They need to be given time to grow and meet demand slowly. We also have to manage demand so that people don't dismiss our products with only a surface understanding. I am passionate about this, 'cause I saw it happen to street wear. We thought we were the epicenter in New York, boutiques were busy, and certain brands were selling across the nation, but we were packaged as a "trend." People didn't understand what we were trying to say, they just recognized a common aesthetic between certain designers. People bought the "look," not the message or the actual soul of what was going on. When that happens, you have no longevity. As soon as the recession hit, everyone went down. There was no customer loyalty because they were just buying clothes, they didn't buy into the culture.

As consumable art, food lends itself to competition, but why are we in such a rush? Does it really matter if you were first in line? As eaters, it makes sense if you are more concerned with understanding the food, experiencing it, and soaking it in. There is no need to run around town eating, dismissing, and checking things off a list. One of my favorite things is to take a train to a neighborhood I don't know and just collect menus representing a certain style of cuisine, perhaps Eastern European in Brighton Beach or Coney Island. I'll look at them all and try something new, then I'll go back in a month and try something else in the same vein. I keep going back trying the same food item at different places until I develop a foundation and frame of reference. I remember my first piroshky in Seattle (Piroshky Piroshky). I told everyone about it, how awesome piroshky was, but I didn't realize how dope that first hit was until I started eating it more. It's really damn hard to make a good piroshky. Now, imagine the inverse if all I had were horrible Brooklyn piroshky? I never would have given the one in Seattle a shot. It's for your own good to eat slowly. There's only so much you can glean in one sitting. As my mother always said, chew slowly and eat every grain of rice 'cause anything you leave will be a freckle on your baby mama's face.

Eddie Huang is chef and owner of BaoHaus restaurant in New York City. He writes the blog, Fresh Off the Boat.