The dirty secret about Wisconsin

How could a bastion of progressivism become ground zero for an assault on unions? There's a reason ... 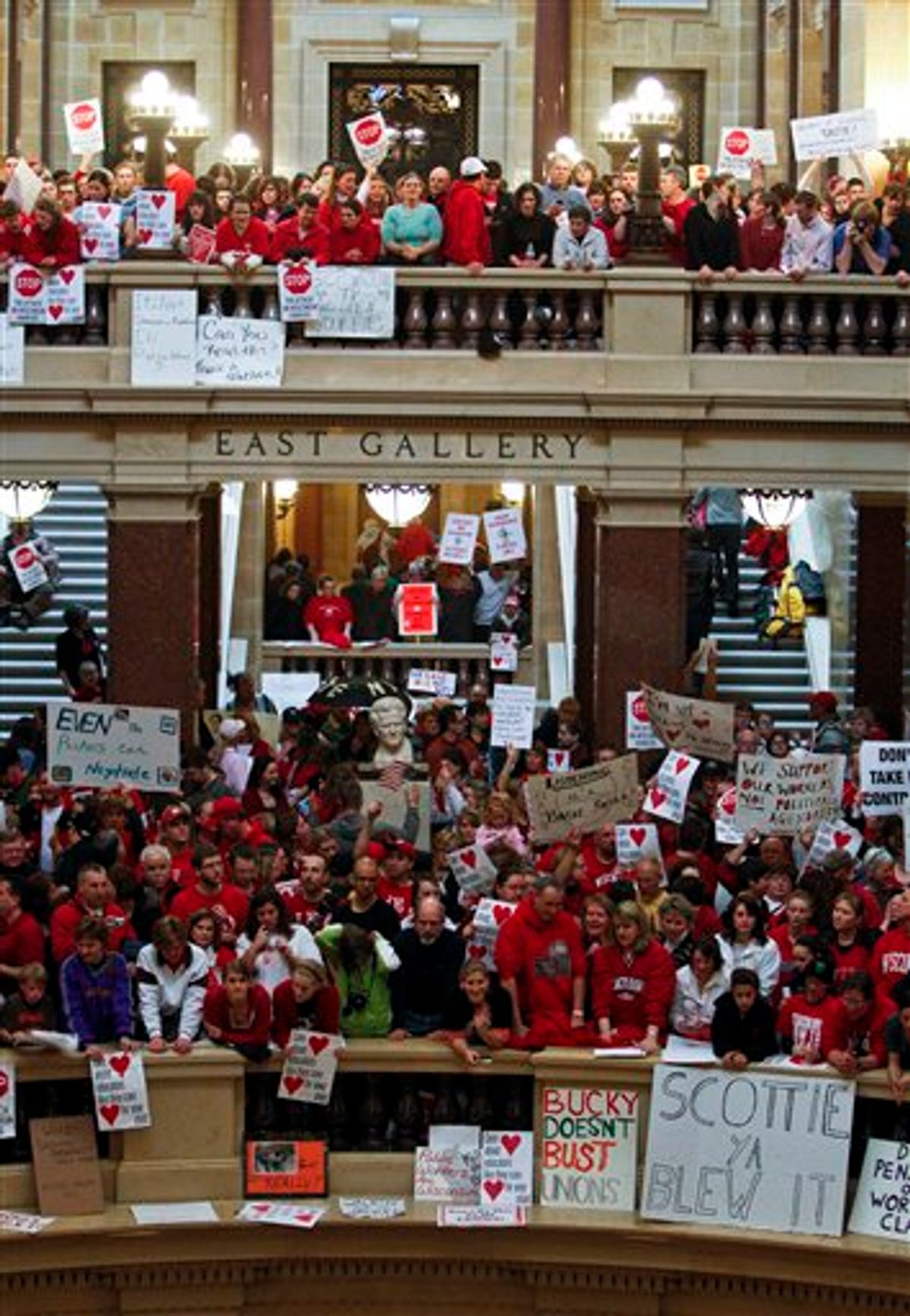 Wisconsin, with its rich progressive history, seems an unlikely setting for a push to deny public employees the right to bargain collectively.

This, after all, is the state where the Fugitive Slave Act was first declared unconstitutional, where the Socialist Party of America found an early home, and where voters sent an avowed Socialist -- Victor Berger -- to Congress for the first time ever, back in 1910. Thus, it's unfathomable to many watching this week's drama in Madison that the Wisconsin Idea of "Fighting Bob" La Follette might now give way to Scott Walker, the new Republican governor, and his effort to essentially do away with public employee unions.

But there's a dirty secret about Wisconsin: The state isn't nearly as liberal as its reputation.

Sure, it's home to Madison, one of the biggest centers of academic liberalism in the country, and has produced more than its share of progressive icons (Russ Feingold and David Obey are only the two most recent examples). But this tradition is balanced against a statewide electorate that contains no shortage of political conservatives, working-class "white ethnics" who break with the national Democratic Party on cultural issues, and middle-class voters whose loyalties shift between the parties largely based on the economy.

As I pointed out last fall, for all of Feingold's acclaim, his popularity in Wisconsin was never that broad. In his three victorious Senate campaigns, he never broke 55 percent of the vote. And last year, with the economy in the tank and Democrats controlling Congress and the White House, he only managed 47 percent, losing to Republican Ron Johnson. Much of the state was always resistant to Feingold's progressivism, and when the necessary economic conditions were in place, those critical swing voters turned on him too.

It was also last November that Walker, previously a state legislator and county executive (with one failed gubernatorial bid already under his belt), was elected over Democrat Tom Barrett, 53 to 46 percent. The result was almost entirely attributable to the economic and political climate. Barrett, you may recall, began the campaign as something of a folk hero -- a courageous mayor who answered a woman's cries for help only to be viciously assaulted by her ex-boyfriend. His bravery counted for nothing in November, though, and he finished with almost exactly the same share of the vote as Feingold. Swing voters were simply in the mood to elect Republicans, and nothing else mattered -- not heroism, not any fondness for the state's progressive tradition.

Republicans have had plenty of other successes in Wisconsin in recent times. Robert Kasten represented the state in the Senate for two terms from 1980 to 1992, before losing a close race to Feingold. And Tommy Thompson was elected governor four times between 1986 and 1998; he also championed a welfare reform program that helped inspire the national law that President Clinton signed -- over fierce objections from liberals -- in the summer of 1996. George W. Bush nearly broke through in both 2000 (falling 5,700 votes -- or 0.22 percent -- short against Al Gore) and 2004 (an 11,400-vote -- or 0.48 percent -- loss to John Kerry) and Ronald Reagan carried the state in both 1980 and 1984. Going further back, George Wallace -- powered by strong support from working-class "white ethnics" -- finished second to George McGovern in Wisconsin's 1972 Democratic primary, and nabbed a surprisingly high 30 percent of the vote in his symbolic effort in the 1964 primary. And don't forget: The state elected Joe McCarthy to the Senate. Twice.

In this context, Walker has far more cover to pursue his anti-union campaign than the casual observer might assume. And, as even many Democratic governors (like Andrew Cuomo in New York) are noticing, the basic notion that public employee unions have been given outrageously generous contracts is actually a very popular one right now, no matter how blue a state is -- or might seem.