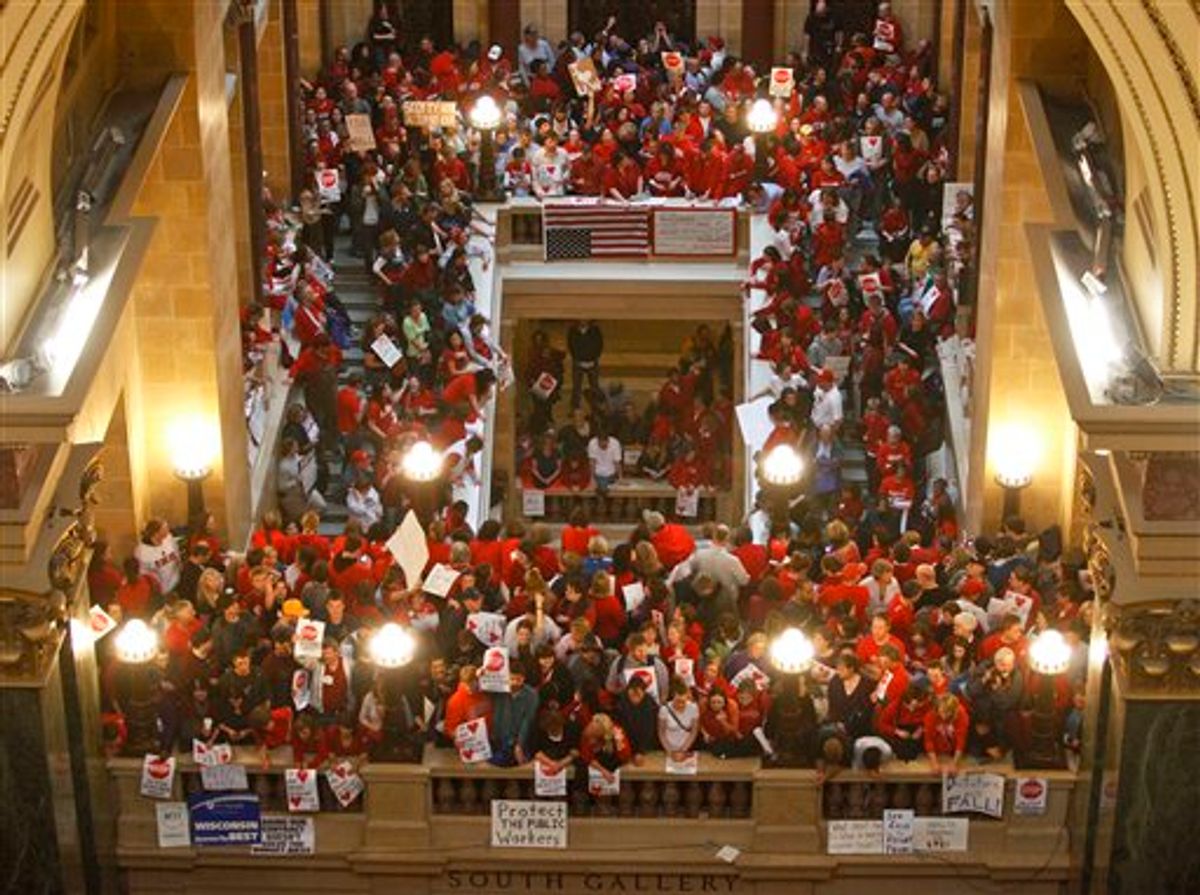 Democrats are all lathered up about the notion that Wisconsin Gov. Scott Walker is using "trumped up" budget tricks to justify his attack on public sector unions. There is some truth to this. After becoming governor, Walker immediately passed a couple of tax cuts that turned what would have been a  budget surplus into a $137 million budget deficit for the current fiscal year. It's classic starve-the-beast Republican tactics -- eviscerate tax revenue and then use that as an excuse to go on the warpath against Democratic priorities.

(UPDATE: Actually, Wisconsin's budget situation for the current fiscal year turns out to be  much more complicated than my description here. See note at the end of this post.)

But that does not mean, as Washington Post blogger Ezra Klein asserted on Friday morning, that "the Badger State was actually in pretty good shape" before Walker started playing games.

The Badger State is not in good shape. Like many other states, it is facing a huge fiscal hole over the next two years. Wisconsin calculates its budgets on a biennial basis, and the latest estimate for the next two-year budget is for a $3.6 billion deficit. Sure, that number is considerably bigger than a $2.2 billion deficit projected by the outgoing Democratic administration, and Walker has obvious political reasons for inflating it, but independent analysts do not find the figures out of line.

The reason is simple: The largest driver of Wisconsin's looming budget deficit has very little to do with public sector unions or Walker's tax cuts. If you're looking for a villain, the most likely suspect is Medicaid. Medicaid costs could add up to as much as half of the $3.6 billion shortfall.

Wisconsin's Medicaid rolls jumped significantly as a result of the recession. The Obama administration came to the rescue, first via the Recovery Act and then through supplementary funding specifically aimed at filling the Medicaid hole. Over fiscal years 2009-11, the federal government boosted Medicaid funding in Wisconsin by $1.4 billion dollars.

But come this June, that funding runs out. Jon Peacock, director of the Wisconsin Budget Project, says the loss of the additional federal aid could contribute as much as $1.25 billion to the $3.6 billion deficit.

And here's the kicker. The Affordable Care Act forbids states from changing Medicaid eligibility requirements until 2014, at which point Medicaid rolls are supposed to expand even further. Wisconsin is going to lose a major source of funding while still facing the same Medicaid costs.

Wisconsin faces a serious challenge, but the state is hardly alone. Fiscal year 2012 is shaping up to be a disaster all over the country, and the Medicaid jam is a big reason why. Earlier this week, Arizona received a waiver from the federal government allowing it to trim its Medicaid rolls, but Arizona's situation has some special characteristics that distinguish it from other states. Given the Obama administration's primary goal to increase healthcare coverage, it is not eager to grant similar waivers to other states that would allow them to cut loose their poorest and more vulnerable citizens.

The great clash between right and left in Wisconsin is worth every bit of national attention it is getting, but not necessarily because of the issue so visibly at the heart of the struggle -- the question of whether public sector unions should have collective bargaining rights. As Atlantic.com's Megan McArdle points out, "state governments are where some of the hardest choices about taxes and spending have to be made" and Wisconsin's budget dilemma is not flim-flam. Even if Walker wins his assault on public sector unions, and forces state workers to contribute to their pensions, the savings from that will only add up to about $150 million a year, or less than ten percent of the annual expected deficit.

Something somewhere has got to give. If Walker and the Republican state government won't raise taxes, and the federal government vastly reduces its Medicaid funding help, but won't let Wisconsin change its eligibility requirements, it's very hard to see how this all works out in the end.

NOTE ON WISCONSIN BUDGET: A correspondent from Wisconsin supplied some additional numbers on the Wisconsin budget. First, the assertion that Wisconsin enjoyed a budget surplus when Walker took office is in some doubt. The Legislative Fiscal Bureau document that is the source of the numbers being cited by Ezra Klein and others did not include $58 million in debt that Wisconsin owes to Minnesota (after the expiration of a reciprocal tax agreement) and $200 million for certain healthcare expenses mandated by a court order. Furthermore, Walker's tax cuts don't kick in until the next biennial budget, so it seems incorrect to say that they transform this year's "surplus" into a deficit.

Overall, Walker's tax cuts do make a bad fiscal situation worse, but the dots don't connect quite as neatly as some defenders of Wisconsin's public sector unions would like them to.