How Borders lost its soul

The store went from a true alternative to a big-box bore. Now, it's the independent shops who come out the winners 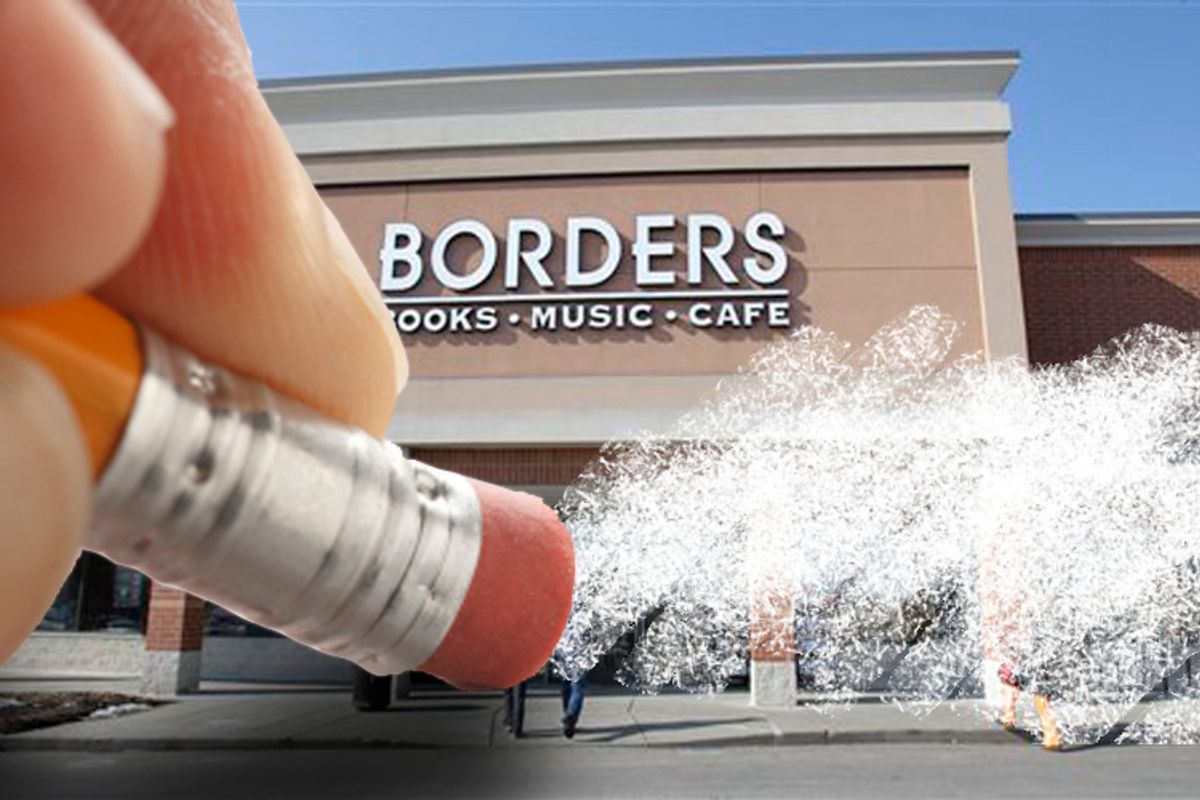 Customers walk into a Borders Books & Music store, which is on the closing list, in Ann Arbor, Mich., Wednesday, Feb. 16, 2011. Borders, which helped pioneer superstores that put countless mom-and-pop bookshops out of business, filed for bankruptcy protection Wednesday, sunk by crushing debt and sluggishness in adapting to a rapidly changing industry. (AP Photo/Carlos Osorio) (Carlos Osorio)
--

When I was a teenager, there were two off-campus bookstores that shaped my reading life. The first was Jocundry's, in East Lansing, Mich., which I discovered when I was in high school. I could always go there for a copy of Michael Moore's alternative newspaper, the Michigan Voice, or a book by George Bernard Shaw or Friedrich Nietzsche, two authors I liked to be seen reading. A bearded Michigan State University historian was always sitting inside the front door of Jocundry's with his dog, reading The New York Times.

The second was Borders, the chain bookseller that declared bankruptcy on Wednesday. As a freshman at the University of Michigan in Ann Arbor, I was awed by the sight of the original Borders, on State Street. Never in my 18 years had I seen two stories of books. I spent nearly as much time reading at Borders as I spent reading in class while my professors lectured. There was nothing to do at Borders but read. In the mid-1980s, a coffee shop was still a diner that served pancakes until 11 a.m.

A decade later, as Borders spread nationwide, I was as excited as a Starbucks drinker from Seattle. In those years, on the cusp of the World Wide Web, I was living in a small industrial city in Central Illinois. Its only literary outlets were a newsstand, whose owner constantly reminded me he wasn't running a library, and a Waldenbooks at the Hickory Point Mall. When I wanted a book of short stories by V.S. Pritchett, I ordered it through a clerk, and waited two weeks. But with Borders invading shopping malls in Erie and Wichita and Normal, everyone in America could have the same instant access to V.S. Pritchett that I'd enjoyed in Ann Arbor.

Unfortunately, the ascendancy of the mega-bookstores ended up destroying Jocundry's, and its dog-friendly atmosphere. Barnes & Noble took over an empty supermarket a few miles from Michigan State's campus. Jocundry's moved into a bigger space to compete with B&N's inventory. The expense ruined them. Jocundry's closed in 2001. Soon after, Barnes & Noble moved into downtown East Lansing, claiming its independent rival's turf.

And so it went in the era of 25,000-square-foot mediasauruses, as Borders and Virgin and 16-screen multiplexes barreled into malls and booming suburbs and cloistered Manhattan neighborhoods. The demise of Jocundry's was the first incident that soured me on big box bookstores. The second was publishing a book myself. When I tried to schedule a signing at my neighborhood Borders, I experienced the difference between a bookseller and a corporation that sells books. As a first-time author, I quickly learned that Borders was not going to let me read when it could get Dennis Rodman or Rudy Giuliani instead. The store manager told me to fax a request to the regional events coordinator. I did so, emphasizing that I'd been shopping at Borders before Dan Brown had ever heard of the store. Borders never called back.

When I published my most recent book, "Young Mr. Obama: Chicago and the Making of a Black President," I did the first signing at 57th Street Books, in Chicago's Hyde Park neighborhood, near the University of Chicago. It was the obvious location, because it's the president's favorite bookstore. How did I arrange an event there? I called the manager, Jack Cella, and said, "Jack, I just wrote a book about Obama and I want to do a book signing."

About 10 years ago, Borders opened a store in Hyde Park, less than a mile from 57th Street Books. It's on this week's extinction list. So it turns out that after all the Op-Ed fretting about neighborhoods being swallowed by commercial behemoths, there are neighborhoods where an independent bookstore served the local market better than Borders.

"Initially, they certainly were a competitor," 57th Street manager Jack Cella said, when I called him on Thursday. "Going back a ways, Borders used to run really good bookstores. It's been awhile. The one in Hyde Park never understood what the neighborhood was about. It's university. It's African-American."

Borders, the store whose independent spirit once made it so much more exciting than the Waldenbooks at the mall, turned into the generic fluorescent bookstore it once aimed to replace. The tables are heaped with blockbusters by Keith Richards and Stephen Colbert. Those escalators, those cash registers, those fidgety coffee lines -- it's not the relaxing hangout it was in 1985. With its one-size-fits-America model, Borders never had the flexibility to file books under "Gender Studies" or "Marxism," popular sections in 57th Street's sister store, the Seminary Co-op, a series of underground caverns packed to the ceilings with esoteric academic titles.

Borders ended up caught between the variety of the Internet and the intimacy of the independents. Its outlets could never stock as many books as Amazon. Nor could they duplicate the native flavor of the corner bookstores, with their local author readings and folk music nights.

So bookstores like 57th Street will outlive the local Borders because they've made themselves community institutions. Nearly every serious reader in Hyde Park owns a $30 share in the store, good for a 10 percent discount. (President Obama has been a member since 1986.)

"I think people are naturally inclined to support a neighborhood-focused bookseller, and one they have a stake in," Cella said. "Our customers are very devoted, and they're not at all shy about offering suggestions."

Thirty years ago, a customer suggested to Cella that Islam was too big a faith to be hidden in Comparative Religions. So Islam got its own section.

Of course, 57th Street's neighborhood has been home to 85 Nobel Prize winners, including Saul Bellow and J.M. Coetzee. In communities with lesser literary traditions, Borders is the only store in town.

"I think, in a lot of ways, independents are in the same boat as these chain stores," Cella said. "We're trying to give people a reason to shop locally rather than online. I don't really feel good about Borders [closing], because in a lot of places, they were an important part of community life. They were meeting grounds. I don't think Borders' closing is necessarily going to help independents, but people are looking for alternatives."

Even with Borders disappearing, the independents will still have to face competition from the Kindle, the Nook and the iPad, not to mention Amazon. But as paper books become a niche product, niche retailers will be the best place to buy and sell them. Book lovers will always want a place to gather and hear recommendations from a bookseller who knows their reading habits, and their community. Borders belonged to an era when book retailing was a big enough business to monopolize. Now that there's no money in it anymore, we may have to go back to shopping for books in stores that let dogs wander through the stacks, and don't even serve coffee.