Swarms of protesters remain camped outside the state Capitol. Here are some of the best images from the scene 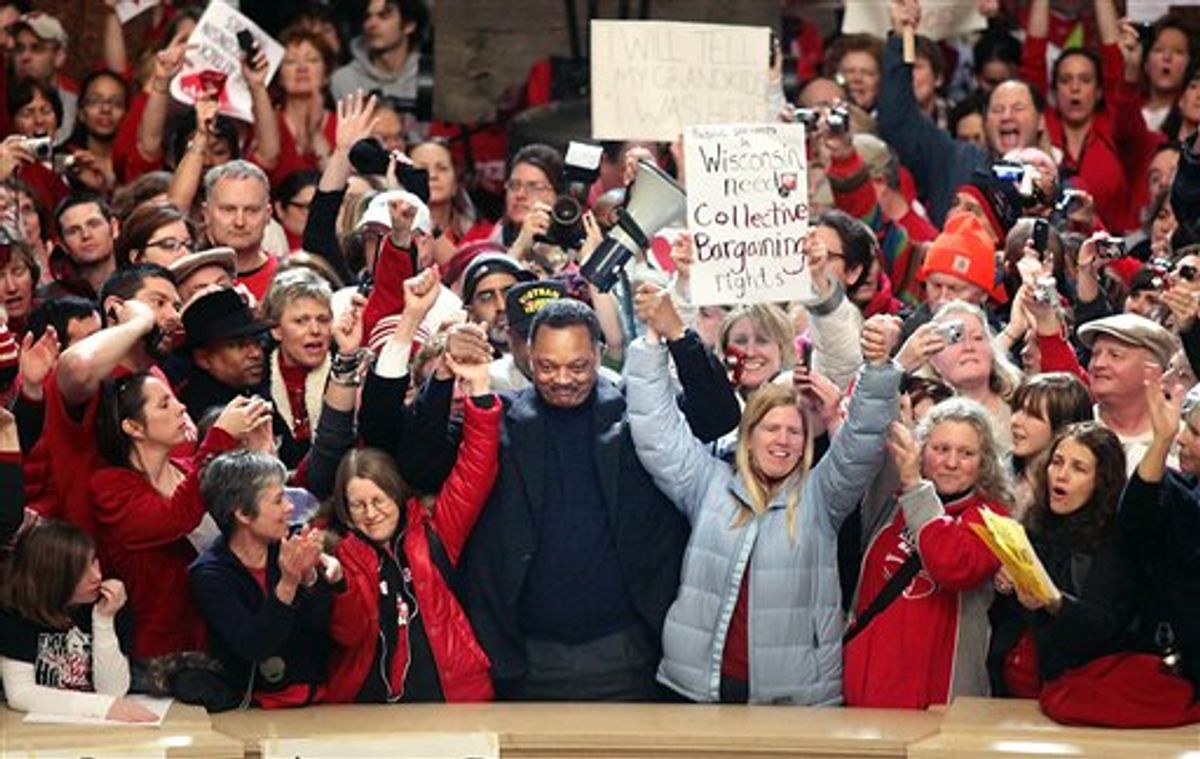 Jesse Jackson stands with protesters at the Capitol rotunda in Madison, Wis. on Friday, Feb. 17, 2011. Union members, students and others have been protesting the governor's bill to eliminate collective bargaining rights for many state workers. (AP Photo/Wisconsin State Journal, Craig Schreiner) (AP)
--

The scene in Madison is frenzied. As Wisconsin Republicans stood primed to revoke collective bargaining rights for state employees this week, 14 Democratic state senators fled in order to forestall a vote. The story captured the national imagination and galvanized a wide range of opinions. And the debate has exposed a major political fault-line in a state with a storied history in the birth of the modern labor movement.

Tens of thousands of protesters -- among them teachers, nurses, students and unionists of all stripes -- have descended on Wisconsin's state Capitol for four days of angry demonstrations. The gathered masses stand opposite Wisconsin Gov. Scott Walker, who masterminded the bill to end collective bargaining. The Rev. Jesse Jackson even appeared in order to voice his opposition to Gov. Walker.

We've collected some of the best images from the protests that gripped Wisconsin this week to help you picture what has evolved into the epicenter of a national debate over the future of organized labor and the merits of the Republican Party's austerity movement. Tens of thousands of protesters crowd around the state Capitol in Madison as the Rev. Jesse Jackson takes the stage. (AP/Wisconsin State Journal, Michael P. King) Jesse Jackson greets protesters at a rally in the rotunda of the state Capitol Friday night. (AP/Andy Manis) Teacher Jo St. Clair of Madison sings during a rally in Madison on Friday. (AP/Andy Manis) Opponents to the governor's bill to eliminate collective bargaining rights for many state workers hold up signs outside the Capitol building. (AP/Andy Manis) Democratic Wisconsin Assembly members cheer on the crowd on the fourth day of large-scale protests outside of the Capitol in Madison. (AP/Andy Manis) Opponents to the governor's bill collect inside the Capitol building, bearing signs invoking embattled American cities such as Detroit and Baltimore. (AP/Andy Manis) State Senate Majority Leader Scott Fitzgerald addresses the media on the Senate floor after the chamber gave Gov. Scott Walker an extra week to present his budget at the Capitol in Madison on Friday. (AP/Wisconsin State Journal, Michael P. King) The man who started it all -- Wisconsin Gov. Scott Walker -- talks to the media on Thursday at the state Capitol in Madison. (AP/Andy Manis) Two protesters put up a sign at the Capitol in Madison on Thursday, that reads "Run Dems Run," in support of 14 state senators who have left the state in opposition to Walker's bill. (AP/Andy Manis) Wisconsin Democratic state Sen. Jon Erpenbach texts on his cellphone at a downtown Chicago hotel on Friday. Erpenbach and fellow Democratic senators fled Wisconsin Thursday to block a vote on a sweeping anti-union bill backed by Republicans and GOP Gov. Scott Walker. The Democrats who fled could stay in hiding for days or even weeks. (AP/M. Spencer Green)