Wisconsin Senate leader: Negotiation is not an option 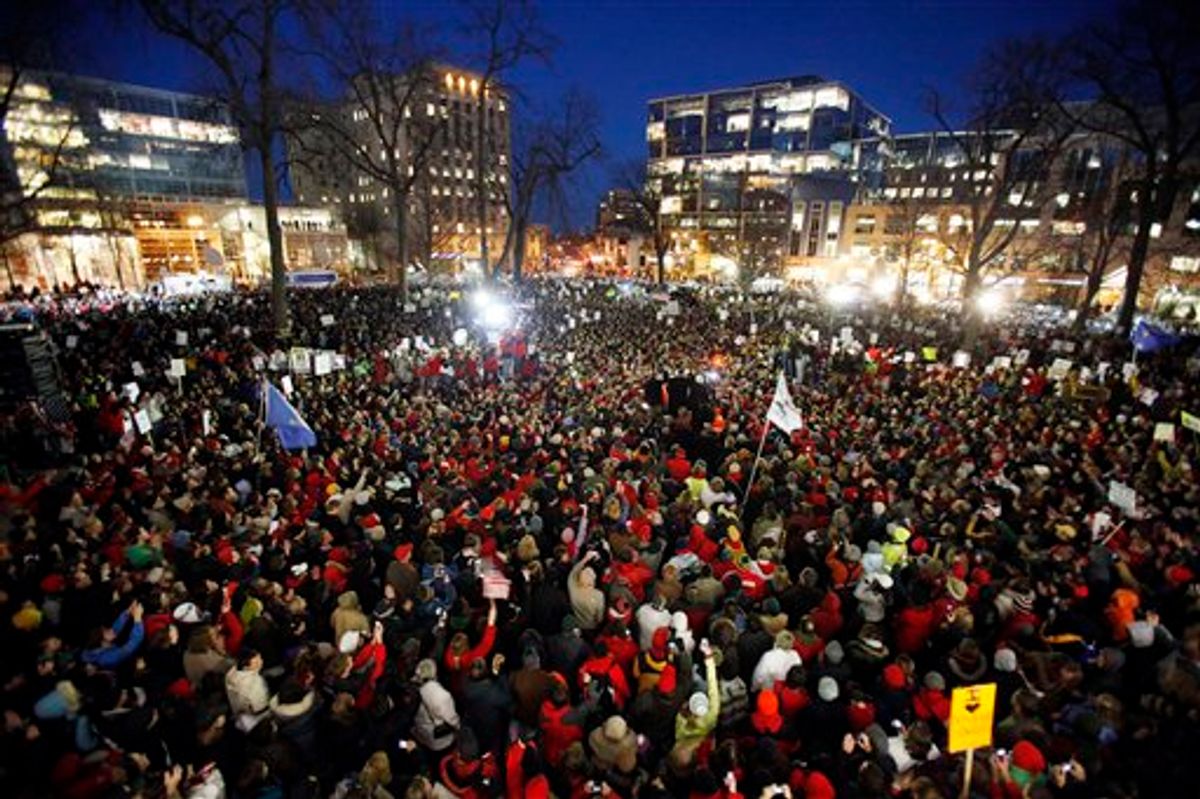 Wisconsin Republican Senate Majority Leader Scott Fitzgerald says a bill taking away collective bargaining rights from public employees is not negotiable and will pass as is.

Democrats and union leaders say they're willing to agree to parts of the proposal that would double their health insurance contributions and require them to contribute 5.8 percent of their salary to their pensions. But they want to keep their collective bargaining rights.

But Fitzgerald said Saturday terms of the bill are not negotiable. He is calling on Democrats who left town Thursday to return to take up the bill.

Fitzgerald says the Senate can meet within three hours if Democrats are ready to return.

As many as 40,000 people swarmed the Capitol on Friday, raising the noise in its rotunda to earsplitting levels as they rallied to block Republican Gov. Scott Walker's efforts to ease Wisconsin's budget woes by cutting many government workers' pay, benefits and bargaining rights.

About 200 spent the night at the Capitol, and on Saturday morning, many walked around wearing signs declaring the protest peaceful. Several said they were concerned that the four days of violence-free protests would be disrupted Saturday when buses of tea party activists arrived.

Sue Anderson, 44, of Prairie Du Sac said she had been at the Capitol for three of the four days of protests was prepared to insert herself between people if a fight started.

"They know better," she said. "I don't know much about the tea party, but I know this group is pretty mellow."

Beth Kiehl, 47, of Pleasant Springs, sat on a mat in the rotunda eating a breakfast bagel. She expressed concern that people were tired and punchy, making tempers short.

"It would be easy to lose control because you're tired," she said. "This could go bad really fast."

Madison is no stranger to political unrest, having seen activists take to the streets to protest the Vietnam war, support civil rights and oppose cuts in social services. Riots ensued 15 years ago when police clamped down on an annual block party that began as an anti-war protest in 1969.

Some say this week's rallies are unmatched in their sustained, impassioned energy -- bolstered by Senate Democrats who fled the state to delay action on Walker's proposal and threatened to stay in hiding for weeks if calls for negotiation go unheeded. One of those Democrats said Saturday the group had no plans to return over the weekend although they would meet outside the state later in the day.

Sen. Jon Erpenbach said Democrats want Walker to seriously consider a deal under which public employees would agree to pay more for benefits as long as they kept their rights to collectively bargain. The bill calls for the elimination of collective bargaining except over wage increases not greater than the Consumer Price Index.

Walker has said he would not accept that deal. A Walker spokesman said the governor was spending time with his family Saturday, but he didn't say where.

Democrats who stayed in Madison on Friday scored their own victory, forcing the state Assembly to adjourn until at least Tuesday without taking a vote on Walker's bill. Republicans, however, have more than enough votes to pass the measure once the Legislature can convene.

State troopers were sent to retrieve the Democratic minority leader from his home Friday, but their knocks went unanswered.

"That's jaw-dropping. This is uncharted," said Mordecai Lee, a UW-Milwaukee political scientist and former state lawmaker who said he's been reminded this week of when motorcycle riders' protest of a helmet law in the late 1970s persuaded legislators to overturn the measure.

The vast majority of the protesters who have for four days filled the Capitol with chanting, drum-beats and anti-Walker slogans have been union workers and their supporters. Protests were organized for Saturday by groups including the Tea Party Patriots, the movement's largest umbrella group, and Americans for Prosperity.

Paul Soglin, a former Madison mayor who has been at the Capitol all week and spent at least one night on the floor, didn't seem concerned about clashes with the opposition, saying he's been struck by protesters' positive enthusiasm.

"A joy, yes, in the way people greet one another, the way they're energized by one another," said Soglin, who described himself as a veteran of more than 100 protests since the 1960s and is running for mayor again. "They're excited that even though there's a grim prospect of the bill being adopted, that in the long run they're building something that can be strong for the working class."

Walker insists the concessions he is seeking from public workers -- including higher health insurance and pension contributions -- are necessary to deal with the state's projected $3.6 billion budget shortfall and to avoid layoffs. Eliminating most collective bargaining rights will give state and local governments and schools flexibility to deal with upcoming cuts in state aid, Walker said.

Sarah Palin weighed with a Friday night posting on her Facebook page that urged "union brothers and sisters" not to ask taxpayers to support "unsustainable benefits packages."

"Real solidarity means everyone being willing to sacrifice and carry our share of the burden," Palin said in her post, which did not indicate whether she would join conservatives in Madison this weekend.

Dane County Sheriff Dave Mahoney predicted crowds could swell to as many as 70,000 people on Saturday and said his department planned to add 60 deputies to the 100 who patrolled during the week.

The throngs of protesters -- including teachers, prison guards and many students -- have been largely peaceful. Police reported just nine citations for minor offenses as of Friday. Schools throughout the state have closed this week after teachers called in sick, including in the state's largest district, in Milwaukee.

The leader of the state's largest public employee union said workers were prepared to discuss financial concessions but not to give up bargaining rights. Marty Beil, executive director of the Wisconsin State Employees Union, said protests would continue until Walker agrees to negotiate.

But neither Walker nor the Republicans who took control of both the state Senate and Assembly in November appear ready to make concessions. Walker has called on Senate Democrats to "come home" and rebuffed a request to sit down with them to seek a compromise.