His ethical blindness is alarming, but it's also common on the Supreme Court -- and there's no way to stop it 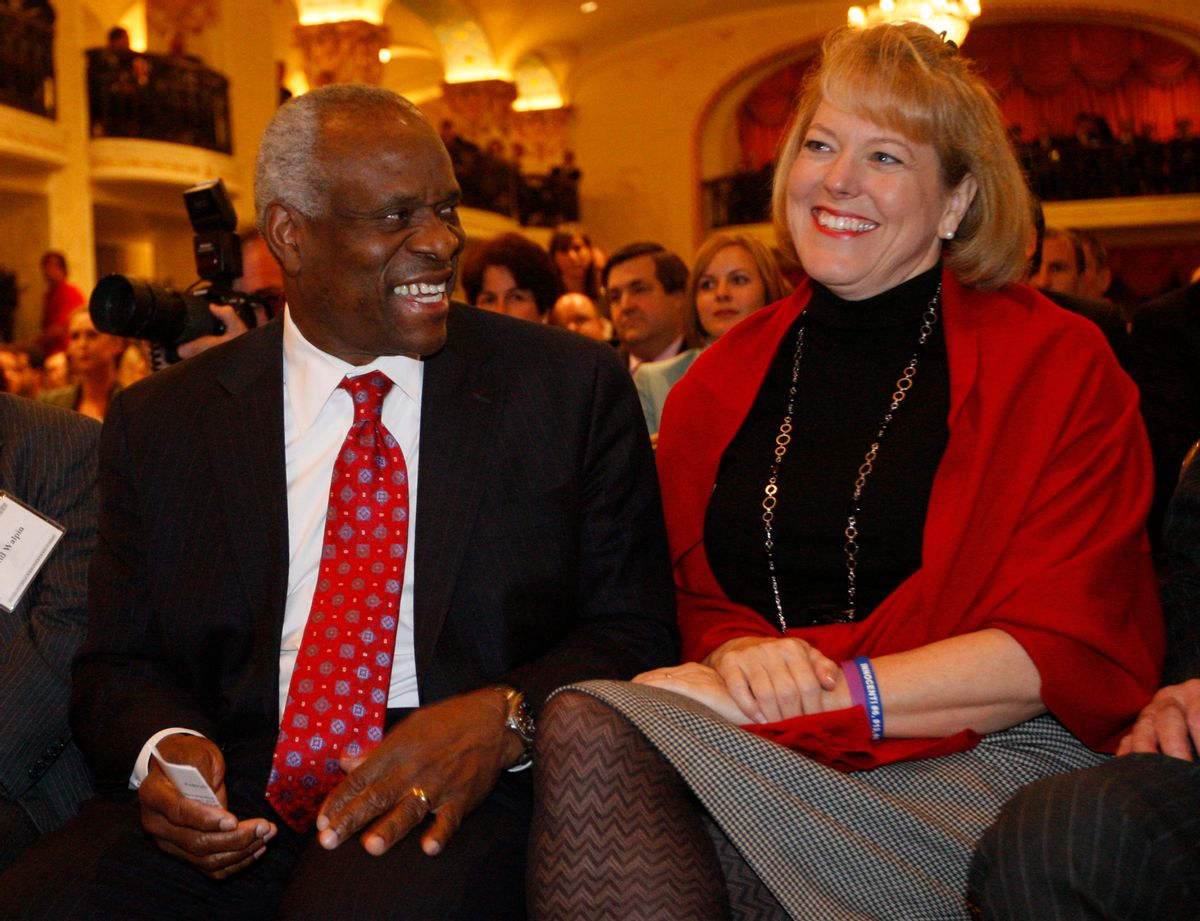 FILE - In this Nov. 15, 2007, photo, Supreme Court Justice Clarence Thomas, left, sits with his wife Virginia Thomas, as he is introduced at the Federalist Society in Washington, where he spoke about his new book and took questions from the audience. Virginia Thomas is asking Anita Hill to apologize for accusing the justice of sexually harassing her, 19 years after Thomas' confirmation hearing spawned a national debate about harassment in the workplace.(AP Photo/Charles Dharapak) (Associated Press)
--

It's been a rough few months for Justice Clarence Thomas and his wife, Ginny.

First, in October, Ginny left a bizarre, early morning phone message for Anita Hill asking her to apologize for the sexual harassment accusations she leveled at Thomas 20 years ago. Then, in January, the good government group Common Cause revealed that Thomas claimed "none" for "spousal noninvestment income" on a disclosure form during years where his wife pulled in six figures working for two conservative organizations, the Heritage Foundation and Liberty Central. Having a wife who worked for a group that opposed healthcare reform raised the question of whether Thomas should recuse himself in future cases on the law's constitutionality. (74 House Democrats think so and they sent Thomas a letter saying as much).

Now Common Cause has just revealed that Thomas took an all expenses paid trip in 2008 to Palm Springs for four days to make a speech with money that he says came from a conservative legal group but that may have actually come from the controversial company Koch Industries. In 2010 the Supreme Court overturned limitations on corporate political spending in Citizens United v. FEC. The Koches -- staunch fiscal conservatives who own an energy conglomerate -- have run wild with that new freedom, so Common Cause argues that Thomas should have disqualified himself from ruling in Citizens United. (If Thomas had recused himself the 5-4 decision would have been tied 4-4 and the lower court ruling upholding the spending limits would have stood.)

Experts on legal ethics don't all agree on whether Thomas should have recused himself in Citizens United and whether he will be honor bound to do so for healthcare reform. But they are unanimous in their condemnation of Thomas' dishonest filings on his disclosure forms. "Since it went on for six years [2003-2007 and 2009] it's especially troublesome," says Stephen Gillers, a prominent expert on legal ethics at NYU law school. "It's impossible to claim it's an oversight."

It would be comforting to think that Thomas' shady behavior was an anomaly, but it's actually just the most egregious example of trends that have made Supreme Court justices seem more like hypocritical and partisan politicians than disinterested jurists. If left unchecked, the court will seriously damage its public image.

The problem has two roots: changing social norms and lax ethical rules governing the Supremes. The former is beyond the scope of our government but the latter isn't, and Congress should act.

Supreme Court justices work in a weird, gray area, with virtually none of the ethical or legal impositions that most similarly powerful people are subjected to. The Code of Judicial Conduct that governs the behavior of federal district and appeals court judges does not apply to the Supreme Court. If it did there would be a bunch of regulations on justices, such as a rule against speaking at fundraisers for advocacy groups, which they are currently free from. The Supreme Court says it follows the principles of the code, but there is currently no way to force it to.

The only binding rules for justices are the laws governing conflict of interest. And even they have no enforcement mechanism: If a justice decides not to recuse himself, the aggrieved party is out of luck because there is nowhere to appeal.

Just ask the Sierra Club, which in 2004 filed a motion asking Justice Antonin Scalia to recuse himself from hearing their effort to make Dick Cheney reveal the members of his secret energy task force. Scalia had just been on a hunting trip with Cheney, and the case had the potential to embarrass Cheney just before the 2004 election, but Scalia refused to recuse himself. Short of impeachment, which is incredibly rare, there is no way to discipline a justice who does not follow the law on recusal, which says that a judge should recuse if his or her "impartiality might reasonably be questioned." Many experts, such as Gillers, think Scalia should have recused himself in the energy task force case, but -- in violation of the principle that no one can be his own judge -- Scalia got to decide that he thinks he's perfectly impartial, thank you very much. And that was that.

With no penalty for breaking the law, it is more likely to happen. "There is no effective deterrent," says Jonathan Turley, a constitutional law expert at George Washington University's law school. "You have a significant violation by [Thomas] and virtually no accountability."

Public disapproval is one way to impose accountability, but that seems to not exert the pull it once did. Whereas justices were once wary of speaking out on controversial matters, they have become more comfortable speaking their mind, even on matters before the Court, and often in front of partisan audiences. Just the day before the first revelations about Thomas broke, Turley published an Op-Ed in the Washington Post lamenting this trend of "celebrity justices," and criticizing Scalia for recently speaking at the congressional Tea Party Caucus' Conservative Constitutional Seminars. "It allows justices to merge their role in cases with the broader political debate, robbing the Court of the appearance of neutrality," says Turley. (Case in point: Earlier this month Thomas, speaking at a Florida college, vociferously defended the Court's decision in Citizens United and attacked specific newspapers whose editorial boards disagreed with the ruling.)

Other experts caution that engaging with and educating the public on constitutional law is a good role for justices to play. But there is widespread agreement that without any rules placed on speaking engagements, questionable situations like Thomas' free trip will arise.

So, if justices were following the Code of Judicial Conduct, would Thomas have broken the rules? Some would argue that being reimbursed for travel is not the same as accepting a speaking fee, which would clearly be forbidden. Critics like Common Cause counter that four free days in an expensive resort town is a form of payment. And what about ruling on healthcare reform in light of his wife's work? That would depend on how much of Ginny's work is focused on that law and how she might benefit from him overturning it.

It's hard to figure out the answer to those questions when you don't have access to all the relevant information. That's part of the problem with our current system. "Justices aren't required to disclose as much as they should be," says Bill Yeomans, a former Department of Justice official who teaches at American University's law school.

These problems are not limited to conservative jurists. In December, the Senate removed Thomas Porteous, a district judge in Louisiana appointed by Bill Clinton, for a number of ethics violations. Some of Porteous' actions that led to his impeachment included filling out forms during his confirmation process and personal bankruptcy proceedings with false information -- an awfully similar transgression to Thomas'. Will Congress uphold the same principles where Thomas is concerned?

There's some reason to be optimistic. This past week, Sen. Chuck Grassley, the ranking Republican on the Judiciary Committee, introduced a bill to create an inspector general for the judiciary who would have authority over the Supreme Court. That -- combined with a law that would impose the important elements of the Code of Judicial Conduct on the Supreme Court and create a mechanism to enforce it -- could help save the Court from itself.

Ben Adler covers politics and national affairs for Newsweek and The Daily Beast. He previously worked for Politico and his writing has also appeared in The Atlantic, Columbia Journalism Review, The Nation, The American Prospect and The Washington Monthly among other publications.