The headache that drove me to an IV needle

I had just lost 200 pounds. I was in the best shape of my life. Then a throbbing pain turned everything upside down 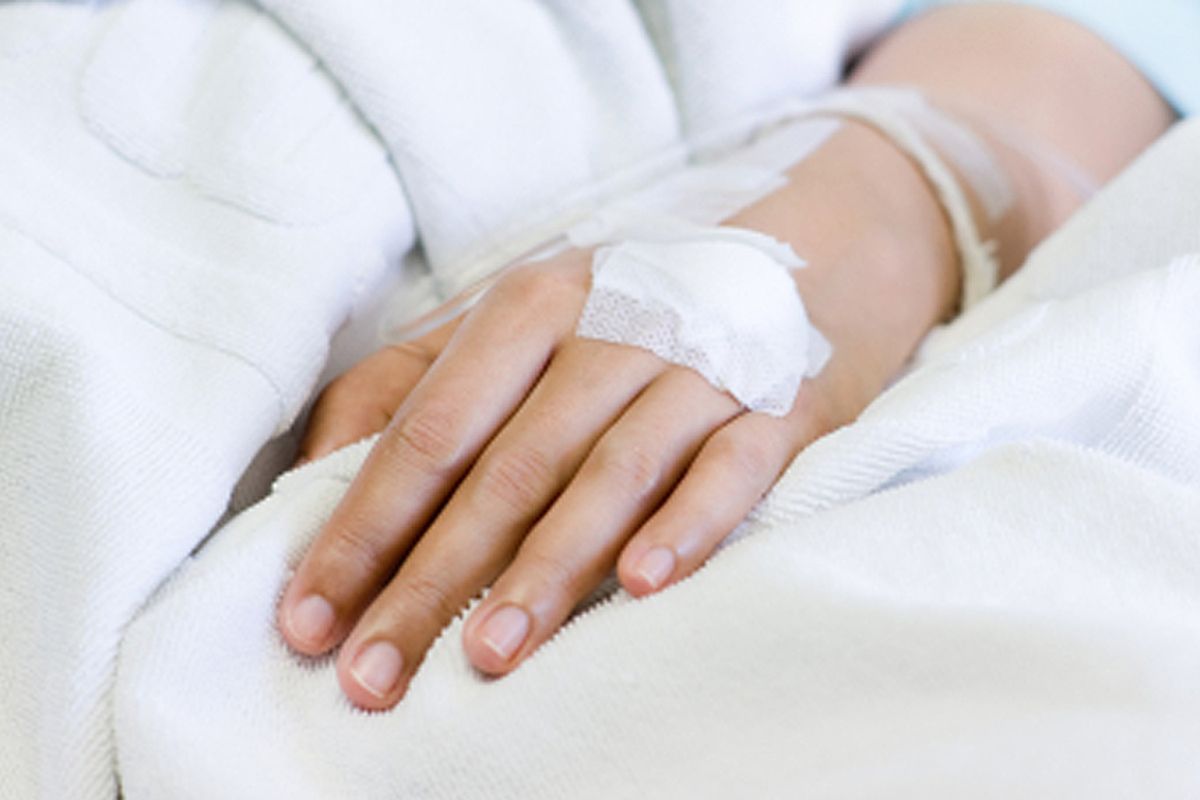 "Hi, I'm Nurse Joan from the infusion pharmacy. Are you Jennette?"

"Yes, that's me," I said as I opened the door for the gray-haired woman dressed in a light green blouse and khakis. Her clothing surprised me. I thought she would be wearing a uniform, but I suppose a cute, white nurse's outﬁt with a dainty hat would have made her look like a singing telegram. Nurse Joan shufﬂed past me into my one-bedroom apartment. She held only her purse and a small, blue canvas bag the size of a makeup kit.

"Did the warehouse drop off the IV pole and your medication?" she asked.

"Yes," I said as I closed the door. I walked across my living room toward the shiny, silver IV pole and the huge white garbage bag of medication and supplies that the delivery man had dropped off earlier in the day.

"There's a lot of 'stuff' here," I said as I looked quizzically into the bag. "Stuff" was the only word I had to describe most of the unfamiliar medical supplies inside, all wrapped in sterilized plastic. I turned to see Nurse Joan's clear blue eyes surveying my apartment with the determination of someone about to set up a MASH unit.

Joan was in my apartment because, for the past five months, I'd been suffering from a crushing tension-type headache that, no matter what I tried, wouldn't go away. Just like many victims of car accidents, I can't remember the moment of impact. I'll never know if the pain arrived before lunch, after dinner or while I was in the shower. All I know is that sometime on Feb. 17, 2008, the headache greeted me by hugging my skull tightly, like a grandparent I hadn't seen for years, and wouldn't let go. The appearance of this problem was particularly stunning because I was literally in the best health of my life. I'd lost almost two hundred pounds over the past few years by dieting and exercising -- and written a book about it. Since the onset of the headache I'd gotten an MRI taken of my skull, tried drugs, and fallen back into bad eating habits that spurred me to gain some of my weight back. I thought it was time to give something more extreme a try.

"Have you ever done a home IV treatment before?" Joan asked me as she washed her hands.

"No," I replied, somewhat disturbed when she dried her hands on my crusty kitchen towel.

"First off, I'll start your IV, which means I'll be inserting a tube into your veins that is about six inches long, all in all."

"That contraption will remain in your arm during all ﬁve days of this treatment. You'll hook up your medication to a long piece of tubing that will screw onto the cap at the end of the tube in your arm. You'll understand this better when I show it to you. You're doing a ﬁve-day round of drugs, so I'll show you how to do it today, and the next four days you'll be doing it yourself."

Then she reached for my arm, but paused as her foreﬁnger rubbed up and down a shiny, faded mark near the inside of my elbow. "What's this?" she asked. I was suddenly embarrassed and then, just as suddenly, concerned that she would think it was a scar from a suicide attempt. "Oh, that's just a stretch mark. I used to weigh almost four hundred pounds." I tossed the sentence off like this was no big deal. I'd talked about it so much by now that it didn't seem like a big deal anymore.

"Wow, really?" she said in awe as she still held my arm. The intimate contact made me feel awkward. "How did you lose it?" I mentally inserted subtitles under her face that translated the real question she was asking: "Did you have weight loss surgery?" "Just diet and exercise. It took a little over two years." I really didn't want to talk to Nurse Joan about this. I wanted to be a healthy, happy twenty-something who had left work early to share drinks with my friends at a rock concert. Instead, I was a sick, sad twenty-something who had left work early to share weight-loss tips with a thin nurse next to my kitchen sink. The only thing reasonably positive about my recent weight gain was that it meant I might not have to talk about "My Amazing Weight Loss!" ever again. Regardless, I knew I didn't want to be that large again. The only thing worse than weighing almost four hundred pounds was losing two hundred pounds and then gaining it back. That would be worse than never losing it at all. If that happened, my greatest success would become my greatest failure.

She pulled out a rectangular plastic bag ﬁlled with clear liquid that had a circular metal cap on the bottom. The bag contained Keppra, an anticonvulsant that sometimes alleviates headaches. She hung it on the IV pole and inserted a thirty-inch piece of tubing into the bottom. I knew that the chemical was harmless when handled correctly, but it scared me to be using medication that could kill someone if misused.

"Don't touch the top of the bottle," Nurse Joan said emphatically, as if she were instructing a small child not to touch the hot stove. "If you touch it, it might get infected. If bacteria gets into your blood system, you could become seriously ill or die." Dear God, why were they trusting me to do this on my own? Nurse Joan tapped Morse code on the side of the syringe this time, either to send secret messages about the dangers of bacteria or to remove air bubbles. Nurse Joan then attached the Keppra to my IV and released the roller clamp on the thirty-inch piece of tubing to start the treatment. I gazed in fascination at the odd array of tubing and medication connected to my body.

"What's the weirdest side effect you've encountered?" I asked, because I am a paranoid masochist.

"I had one girl who got horrible migraines. She was on a different drug than you're on. She walked into the hallway of her apartment and suddenly couldn't remember where she was or how to get home. That's called jamais vu. Everything familiar to you seems unfamiliar. She eventually ﬁgured out how to use the phone, and I told her to stop treatment immediately." She continued ﬁlling out the paperwork. "But that's rather rare."

After forty-ﬁve minutes the IV bag was empty. The last stream of liquid ﬂowed to the bottom of the tubing and stopped about six inches from the end. "Hmmm, that dripped a little faster than what we were going for," Joan said. I was simply grateful this ordeal would be over ﬁfteen minutes sooner.

"Oh, well. I feel okay. My headache is still here, but I remember how to use a phone and I know where I am."

Sometimes the cure was worse than the disease, and I had to wonder if this treatment was worth the risk. I felt like I was a breath away from kissing danger. When I was a child riding in the backseat of the car, I had once realized I could open the door at any moment and fall to my death. The only thing stopping me was myself. The more I had thought about it, the more I had felt compelled to open the door, not because I wanted to but because I felt I had to. I tried not to think about the tube sticking out of my arm. If I thought about the plastic inside my veins, I began to imagine I could feel it there. I pushed away the fear, stufﬁng it behind the couch with the TV tray. The risk was worth it. A cure was worth spending $2,000 on an MRI. It was worth turning my arm into a pincushion. If this treatment didn't work, I was prepared to learn what else wellness was worth.

The next day, my co-worker Dave walked over to my desk while I was typing. His hair was oily and slightly mussed, as usual. I looked up to see what he wanted.

I liked wearing the IV on my arm. Now everyone could see my sickness. I no longer had an invisible illness, but one I displayed proudly, written in blood. Now I wore a red badge of honor, memorializing my ﬁve months of duty. When I'd been morbidly obese, I had been embarrassed that everyone could see my problem. I'd wanted a disguise so no one would know how fat I'd become. Now I wanted everyone to know what I was enduring. There was less shame in this because it seemed to be without blame, whereas most people assigned fault to me for my obesity problem. I didn't want pity for my headache, just understanding, and maybe a hug.

That evening, I chatted with my mom, who let me know that everyone in her prayer group had said a prayer for me the night before. I told her to thank them for me, and then I sat down with my Keppra cocktail kit to start the second treatment. After ﬁve days of the IV treatment, I had not developed an infection, and I only needed to summon a nurse once to reinsert the IV.

I felt as though I had gained enough medical skills to convincingly play a nurse on television. I was also in possession of an anaphylaxis kit, enough latex gloves to dye ﬁfty T-shirts, and tons of medical tape, all paid for by my health insurance.

I also still had a headache.

The intravenous drugs didn't do shit, but the pint of ice cream in the fridge made me feel better. I wished I could have gotten my health insurance company to pay for mint-chocolate-chip ice cream, which worked far better than a Keppra cocktail.

Copyright © 2011. From the forthcoming book "Chocolate & Vicodin" by Jennette Fulda, to be published by Gallery Books of Simon & Schuster Inc., N.Y. Printed by permission.

Jennette Fulda is the author of "Half-Assed: A Weight-Loss Memoir," and her forthcoming memoir, "Chocolate & Vicodin: My Quest for Relief from the Headache That Wouldn't Go Away," from which this article is excerpted (in bookstores Feb. 22).