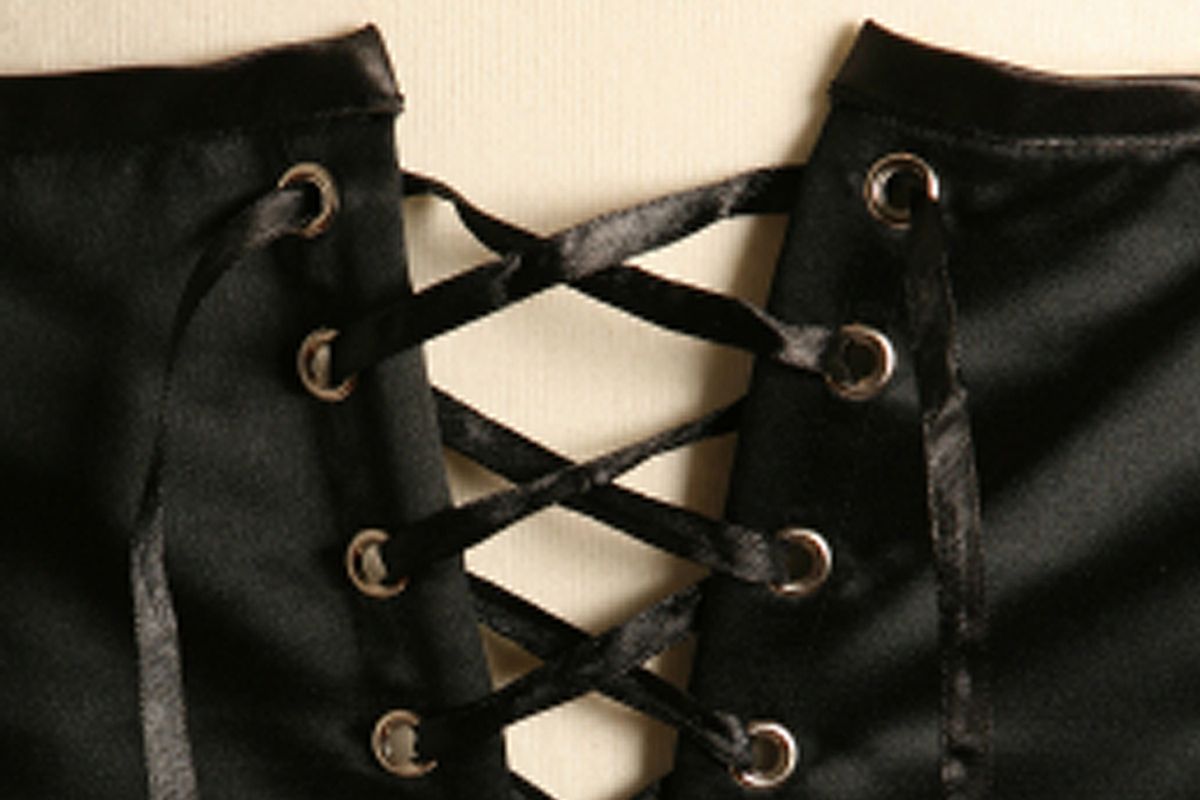 Pornography, S&M, gay "cruising," cross-dressing -- these don't sound like relics of the Victorian era. We think of it as a time of buttoned-up prudery and repression -- and it was -- but loosen the corset of 1860s England and out spills the kink.

In "Pleasure Bound: Victorian Sex Rebels and the New Eroticism," Deborah Lutz writes about the seedier side of 19th century London -- anonymous sex, flagellation brothels and spanking porn, for starters. More interesting still, she introduces us to the sexual revolutionaries of the time. Lutz, a professor of Victorian literature and culture at Long Island University, focuses on a small group of bawdy iconoclasts including explorer Richard Burton, Pre-Raphaelite painters Dante Gabriel Rossetti and Simeon Solomon, poet Christina Rossetti -- Dante's sister -- and poet Algernon Charles Swinburne. These rebels got off, so to speak, on breaking taboos and challenging sexual mores -- through their work and, sometimes, their personal exploits.

The Victorians often eroticized death. Why is that?

So many of these romantic poets and painters started to create paintings of beautiful women or men dying, or writing poetry about the longing that comes when someone is dying. There's also this French term "petite mort," which is the "little death." The idea is that when you have an orgasm you lose yourself. Orgasm is a climax and death is an extreme climax to your life.

How were Victorian sex rebels influenced by religion?

Swinburne was an atheist and he felt very angry about Christianity's restraining of sexual expression. In one poem, he compared the Virgin Mary to a kind of sadistic sexual dominatrix. You can imagine how that went over. Rossetti was raised in a high church household and never really lost his religious belief, but he did become a rebel and bohemian, and he started questioning certain aspects of his belief. His Christian belief began to bleed into eroticism. He began to think of ways of linking spirituality to sexuality. He has sonnets where he writes about how loving and being loved is sort of like worshipping God. He felt there were ways to celebrate the sensual joys of the earth in a spiritual way.

Amazingly enough, prostitution was legal during the Victorian period. There were tons of brothels all over the major cities of England, and of all different kinds. There were lots of flagellation brothels; these were places where primarily men would go to be whipped by women or by men. There were also gay male brothels. You could go to a park in London at night, pick up what were called the "park whores" and give them a very small amount of money to have sex openly in the park. I also write about gay "cruising," which was quite common. If you knew the right place to go and knew the right signals, you could pick up a man on the street and have sex in an alley.

Something like 50 percent of the pornography of the time was flagellation pornography. There are lots of different theories about that. One is that these gentlemen who went to private schools like Eton were whipped for punishment as kids. If they did something wrong they would be publicly birched -- a collection of birch branches tied together would be used. The boy's pants would be taken down and he'd be bent over this special block and it would be public. Any schoolboys who wanted to could come and watch. For many of these boys, of course, it was traumatic, but for other boys it's an erotic experience. It developed into this masochistic eroticism.

Another aspect is that middle-class and upper-class men were expected to be very controlled -- to control their emotions, their servants and their women -- and women were expected to be submissive. So I think a lot of men found themselves wanting to lose control, wanting to be the one who was controlled. They would go to these flagellation brothels to experience what it was to be the one on the bottom, so to speak.

There are also theories about closeted homosexuality. A lot of the flagellation pornography involved men whipping men or tutors whipping boys, and if you think about the position, it's all about the bottom and a whip, so there's a phallic aspect of it.

Just like lesbianism during this period, it's hard to talk about homosexuality because the term was not used in its contemporary sense until the 1880s. This was the time just before sexual identity got hardened into these labels, so we would call what these men were doing homoerotic, but during that time they didn't really have those labels. You might be Algernon Charles Swinburne and your friend Richard Burton might whip you, and it would be fun, but there were no labels for it. He shared spaces with men, he lived with them, he created these networks of work friends, and they would read pornography aloud to each other. Burton and Swinburne would pass around a manuscript and each of them would contribute to this pornographic story. These were ways of being together sexually even if they weren't necessarily having sex. What's really interesting about the Victorians is that it was all so undefined, which is a kind of freedom.

How did these artists experiment with gender roles?

It was really mixed. Richard Burton was a really interesting case because he was a very masculine figure. He was extremely muscular, an adventurer, and he would tell these bawdy stories. He was really interested in disguise. He would dress up like various Eastern figures to try and slip into different cultures. He was a spy for certain parts of the British government for a time. I think he wanted to kind of leave his self and his gender.

Rossetti, of course, painted all these beautiful women, very sensual and often half-dressed. But as he got older, these paintings became more and more masculinized. He often painted Jane Morris -- his best friend's wife, whom Rossetti was in love with and having an affair with -- and as his paintings developed, they became more and more masculine. Jane begins to have this thick neck and muscular arms, which she did not have in real life. She becomes taller; her face becomes more masculine. One thing I argue in the book is that Rossetti is trying to imagine himself as a "dangerous woman." He's coming out of his masculinity and seeing himself as a woman but one of these dangerous women, a femme fatale. This is a projection, I think, of his own gender confusion, his desire to escape his gender.

I was surprised to learn that the spread of STDs influenced the first wave of the feminist movement.

Josephine Butler was a very important feminist. She was a middle-class woman, an evangelical Christian, and she took up the cause of prostitutes, which was a very shocking thing for her to do at the time. She was fighting against a series of what was called the "Contagion Diseases Act," which required that prostitutes be forcefully examined for STDs and treated in locked hospitals. The idea behind this was basically that the prostitutes were the ones who were dirty and corrupt, and that they were passing diseases around. Obviously, the men they were sleeping with were also getting the diseases and passing them around, but it was considered OK for men to frequent prostitutes, but it was not OK to be a prostitute. Butler championed the rights of women over their own bodies. She felt that these prostitutes had a right to say, "No, I don't want that doctor to put his speculum in me." This was a very important platform for early feminists.

It's interesting that Victorian artists like Dante Gabriel Rossetti had relationships with prostitutes that were about much more than sex. They were muses, sometimes friends. Why do you think these relationships developed?

What about the female sex rebels of this time and the art they were producing -- of course Christina Rossetti's "Goblin Market" comes to mind. What do these works reveal about female sexuality at the time?

Rossetti was an evangelical Christian, much more religious than her brother Dante Gabriel, and she spent most of her life denying her sexuality. It's probably the case that she [died] a virgin. "Goblin Market" is about two sisters who have this incredible sexual "coming together" that involves licking fruit juices off of each others' bodies. To us, this seems very "lesbian incest," but the Victorians were very supportive of intimacy between women. Women would live openly together, a woman could refer to another woman that she lived with as her "wife" and they would sleep together in the same bed; this was very common and it wasn't read as being sexual. The Victorians generally didn't see women as very sexualized, so it was difficult for most Victorians to understand that two women might have sex. There was something kind of invisible about lesbianism in the period.