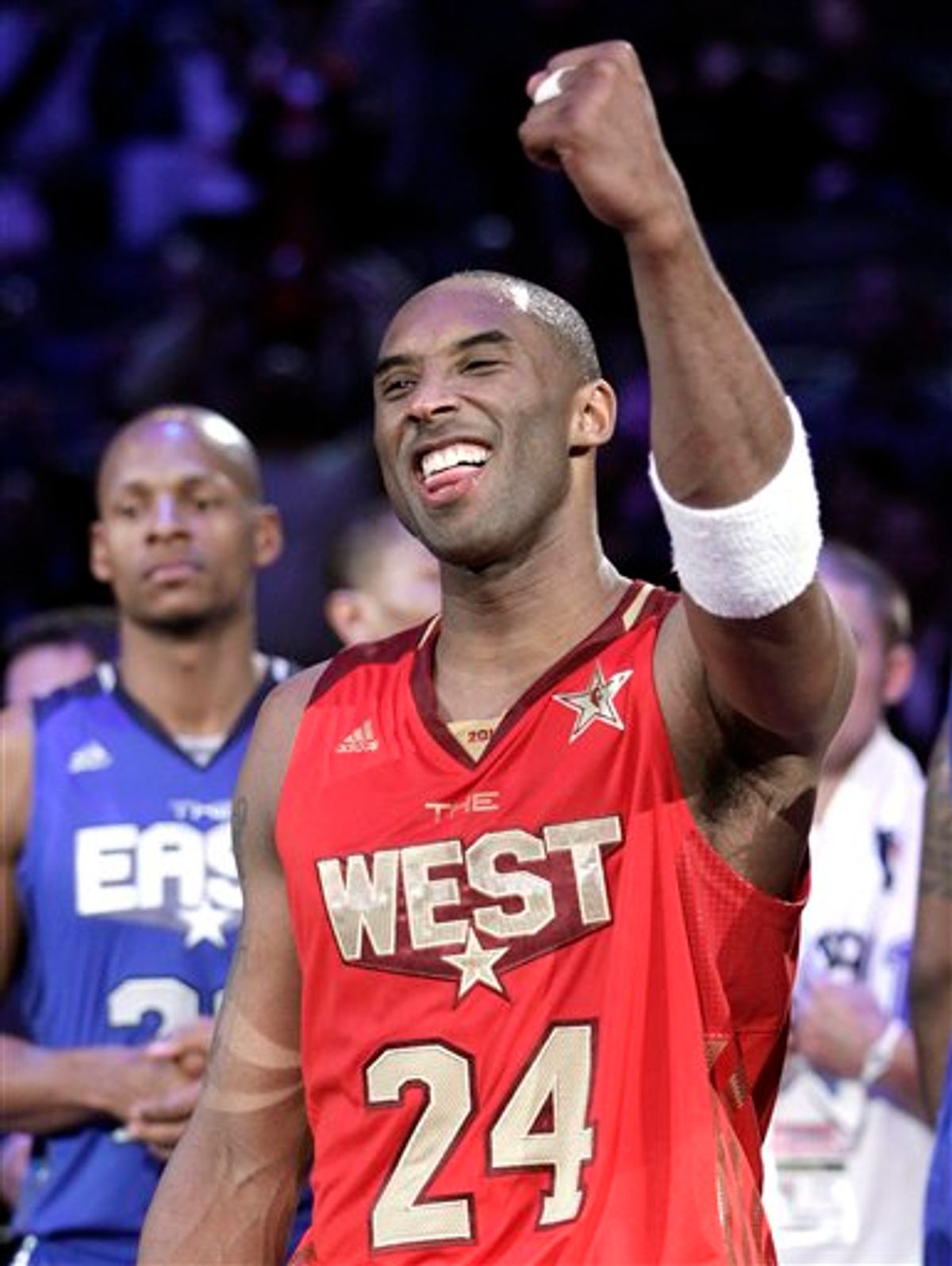 Kobe Bryant talks more about his past than his future these days.

The Los Angeles Lakers' five-time champion guard has said he can see the finish line of his career. He has even talked about clearing out of the way, allowing younger superstars to take charge of the NBA.

Those youngsters weren't ready to let this 32-year-old geezer out of the spotlight just yet -- not at his hometown All-Star game, anyway.

Bryant won his record-tying fourth All-Star MVP award Sunday night with 37 points and 14 rebounds in the West's 148-143 win over the East, finishing five points shy of the All-Star scoring record.

Bryant clearly wanted the trophy that would tie him with Bob Pettit in NBA history, but until taking over the starring role on Sunday, Bryant said he spent the weekend attempting to cede the spotlight. He imagines himself sliding into a background role in the NBA cacophony behind LeBron James and his Miami Heat teammates, or the Boston Celtics' four All-Stars, or even Clippers rookie Blake Griffin.

"I've been there, you know what I mean?" Bryant said. "It's not about that for me at this point in my career. It's very important for the game to continue to have young stars emerge. ... It's important for me to step aside. It's about me coming out and performing and staying healthy, and doing the right things after 15 years."

That didn't stop Bryant from going after an MVP trophy and a West win with unusually ferocious play for a glorified exhibition.

And even though James racked up a silky-smooth triple-double, Kevin Durant dropped 34 points in 30 minutes, and Amare Stoudemire slammed and jammed his way through Staples Center for 29 points, the All-Stars seemed uniformly pleased Bryant came away with one more trophy for his overstuffed case back home in Orange County.

"Everyone wanted him to get the MVP," said Miami's Dwyane Wade, last season's MVP. "He came out very aggressive, as aggressive as I've seen anybody in an All-Star game."

Both All-Star teams seemingly deferred to Bryant for much of the night, finding him on fast breaks and clearing a path for his dunks -- a rarity these days for Bryant, who prefers to conserve the bounce in his aching knees. Bryant even threw down a slam against James' defense in the third quarter, following it up with a 3-pointer.

So enjoy it, Kobe. Hidden in all the adulation and goodwill around hometown All-Star weekend was another common theme: That's the last prize that will come easily to the Los Angeles Lakers' five-time champion guard this year.

"He deserved it," Durant said. "Thirty-seven and 14? That's unbelievable numbers. I wanted him to get 40, but the old fella kind of tired out a little bit."

The Lakers are still title contenders, but they went into the break with three straight losses and serious questions about whether this veteran team can get motivated for a threepeat run. Bryant jokingly claimed he couldn't remember the Lakers' last game before the break -- an inexplicable five-point loss at NBA-worst Cleveland.

Bryant plans to deal with all that Monday at practice in El Segundo.

"We're looking forward to it," Bryant said of the stretch run. "We're up for the challenge. Pau (Gasol) and I have been talking this whole time about looking forward to it, and getting back at it. We've been in communication with the rest of the fellas, and we all can't wait to get started."

Bryant fell short of Wilt Chamberlain's All-Star record 42 points in 1962, but not for lack of trying by his teammates. He went scoreless in the final 6:48.

"I wish we could have," New Orleans guard Chris Paul said. "But Kobe is one of those guys who has been in the league for 13 years, but it seems like he's getting younger, so he'll have another opportunity."