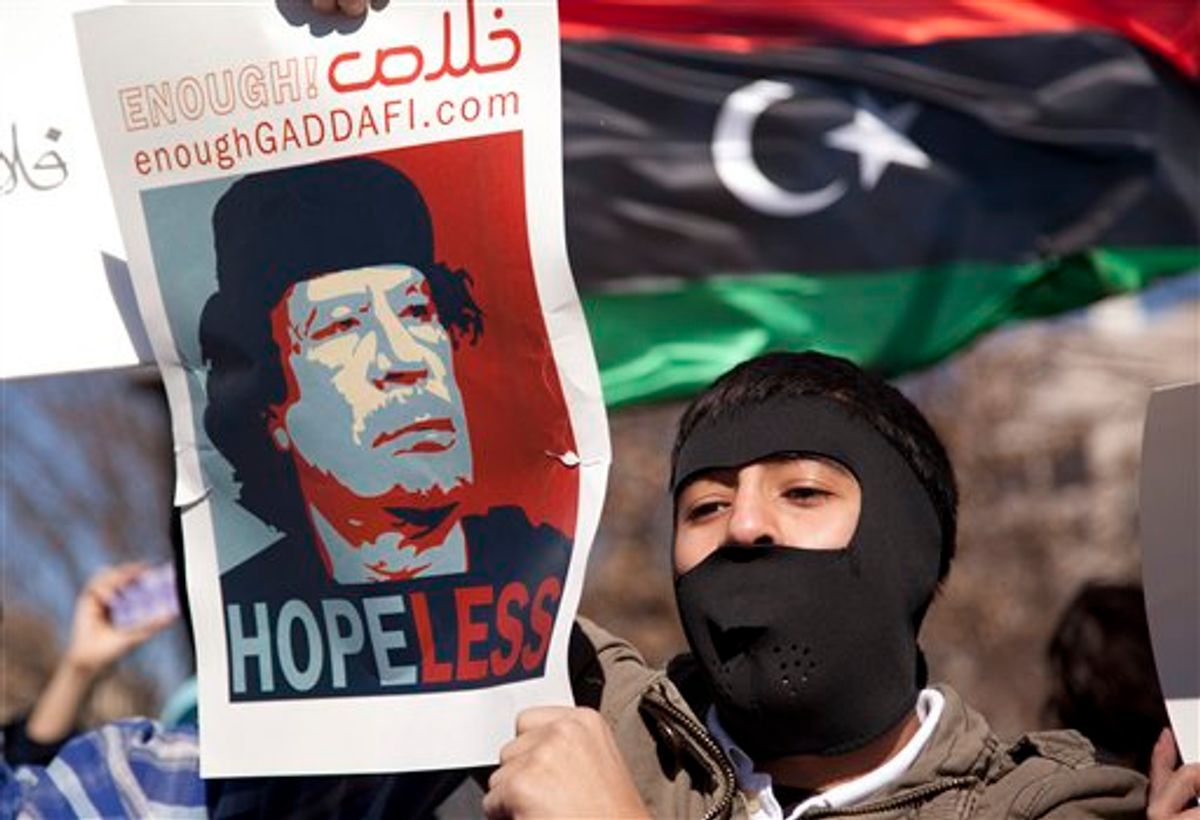 Demonstrators gather near the White House in Washington in a show of solidarity with the Libyan protestors on Saturday, Feb. 19, 2011. Moammar Gadhafi's forces fired on mourners leaving a funeral for protesters Saturday in the eastern city of Benghazi, killing at least 15 people and wounding scores more as the regime tried to squelch calls for an end to the ruler's 42-year grip on power. (AP Photo/Evan Vucci) (AP)
--

Libya's deputy ambassador at the United Nations, surrounded by fellow diplomats, called Monday for Moammar Gadhafi to step down as the country's ruler.

"If he doesn't," deputy ambassador Ibrahim Dabbashi warned, "the Libyan people will get rid of him."

Dabbashi spoke as deep cracks appeared in Gadhafi's regime after more than 40 years in power, with a fire raging at the main government hall in the capital, Tripoli, and protesters calling for more demonstrations despite the government's deadly crackdown.

Gadhafi's son, Seif al-Islam, went on state TV in the early hours Monday, vowing to fight and warning in a sometimes confused speech that if protests continue, a civil war will erupt in which Libya's oil wealth "will be burned."

Some diplomats abroad and the justice minister at home resigned.

But Dabbashi said the U.N. diplomats were not resigning because they served the people of Libya and not the regime.

Libya's U.N. Ambassador Mohamed Shalgham was not present at a press conference where Dabbashi appeared with diplomats from Libya's U.N. Mission, and his whereabouts were not immediately known.

Dabbashi urged the international community to impose a no-flight zone "on the cities of Libya so no mercenaries, no supplies of arms will arrive to the regime."

Qadafi was reportedly using mercenaries against the protestors and military warplanes were seen swooping low over Tripoli Monday evening.

Dabbashi also urged the international community to establish safe passage for medical supplies from neighboring Tunisia and Egypt to get across the borders to Benghazi, Libya's second-largest city, which was the scene of the heaviest fighting. But by Monday, protesters had claimed control of the city, overrunning its main security headquarters.

"We also call on the prosecutor of the International Criminal Court to investigate the crimes against humanity committed by Qadhafi against the Libyan people," Dabbashi told the Associated Press.

He told BBC World that "certainly the best scenario is to have him before the court, to prosecute him and to know from him everything about the crimes he committed before, whether it is the genocide of the prison of Abu Saleem or the genocide he is committing now or the disappearance of certain important personalities... and all the other crimes he has committed during the 42 years in power."

Meanwhile, U.N. Secretary-General Ban Ki-moon had a 40-minute telephone discussion Monday with Qadhafi on the deteriorating situation in the country, demanding an immediate halt to escalating violence and respect for basic human rights, including peaceful assembly and information, U.N. spokesman Martin Nesirky said.

"The secretary-general underlined the need to ensure the protection of the civilian population under any circumstances," Nesirky said. "He urged all parties to exercise restraint and called upon the authorities to engage in broad-based dialogue to address legitimate concerns of the population."