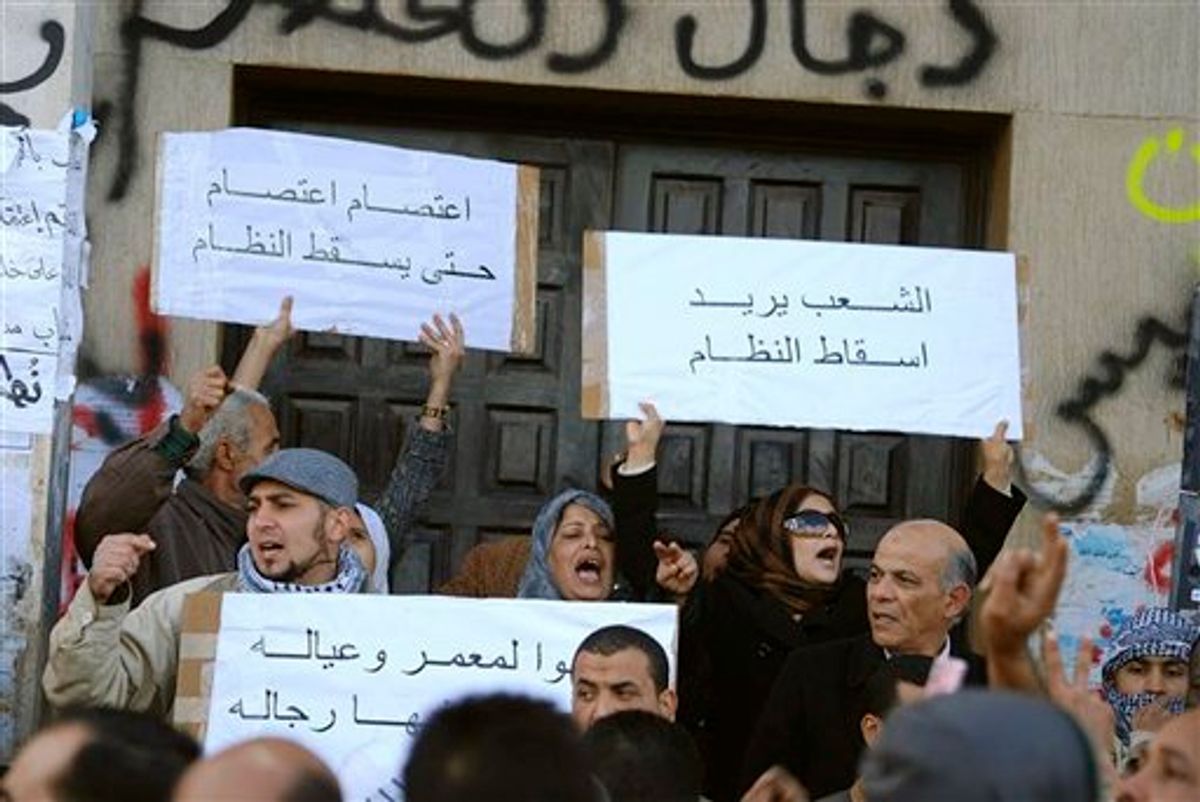 This photograph, obtained by The Associated Press outside Libya and taken by an individual not employed by AP, shows people chanting and holding signs during recent days' unrest in Benghazi, Libya. Placards in Arabic read at top left "Strike, strike until the fall of the regime", and at top right "The people want to topple the regime". (AP Photo) EDITOR'S NOTE: THE AP HAS NO WAY OF INDEPENDENTLY VERIFYING THE EXACT CONTENT, LOCATION OR DATE OF THIS IMAGE. (AP)
--

Portugal sent a plane to Libya to pick up its citizens and other EU nationals and Turkey sent two ferries to fetch construction workers stranded by the country's bloody unrest on Monday, as oil and gas companies said they were putting together plans to evacuate some of their employees.

Many countries have already urged their citizens to avoid nonessential travel to Libya or recommended they leave on commercial flights. The continuing clashes between protesters and security forces have led to at least 200 deaths, and spread overnight to Tripoli, where witnesses reported snipers opening fire on crowds trying to seize the capital's main square.

The EU said the bloc was preparing for the possible evacuation of European citizens. It does not have the power to require its member states to evacuate their citizens from a foreign country, but ministers can agree on coordinated action in come cases.

"We are very worried about the situation in Libya," said Spain's foreign minister, Trinidad Jimenez, at a regular monthly meeting in Brussels that was largely focused on the unrest across the Middle East. "At the same time, we are coordinating the possible evacuation of EU citizens from Libya."

Turkey is sending two ferries to Libya to evacuate Turks -- mostly construction workers. The decision came hours after authorities at the airport in Benghazi, the country's second largest city and a center of the protests, would not allow a Turkish Airlines plane to land, forcing it to circle the airport and return to Istanbul.

Foreign Trade Minister Zafer Caglayan said four planes were on standby, while Turkey is also considering evacuating some of its citizens by land, through Egypt. Turkey began evacuating its citizens after several Turkish construction sites around Benghazi were attacked and looted by protesters on Friday.

Portugal's Foreign Ministry said a C-130 military transport plane departed Monday for Tripoli and should arrive by late afternoon. Authorities weren't sure how many will be evacuated.

Serbia's Foreign Minister Vuk Jeremic said that the country is preparing a plane to be sent to Libya, and that between 500 and 700 Serbian citizens have so far contacted the embassy in Tripoli. Meanwhile, a group of some 50 Serb construction workers wrote in an e-mail to media that they were attacked by a group of armed men and were cut off at a camp on the Mediterranean.

Austria said a military plane is on standby in Malta in case its citizens don't makes it out on commercial flights and an evacuation is necessary.

U.K.-based BP is drawing up plans for evacuating staff "in the next couple of days," BP spokesman David Nicholas said. Unless the situation in Libya changes, it is very likely the plans will go into effect, he added.

Norway-based Statoil said it is pulling a "handful" of expatriate workers out of its office in Tripoli and Austria's OMV oil and gas company was pulling out 11 of its 15 Libya-based expatriates and their families. Poland's state gas monopoly PGNiG said it is evacuating 30 employees.

The Polish consul general in Tripoli, Stanislaw Gulinski, said there are about 500 Poles in Libya, and that the Polish government plans to organize evacuations for them. Speaking by phone on Polish station TVN24, he noted, however, that many of the Poles there have already indicated that they do not want to leave. Many are Polish women married to Libyans who do not want to be separated from their families, he said.