A new column to disinfect unhealthy cultural myths. First up: "The Office" misinterprets the hygiene hypothesis 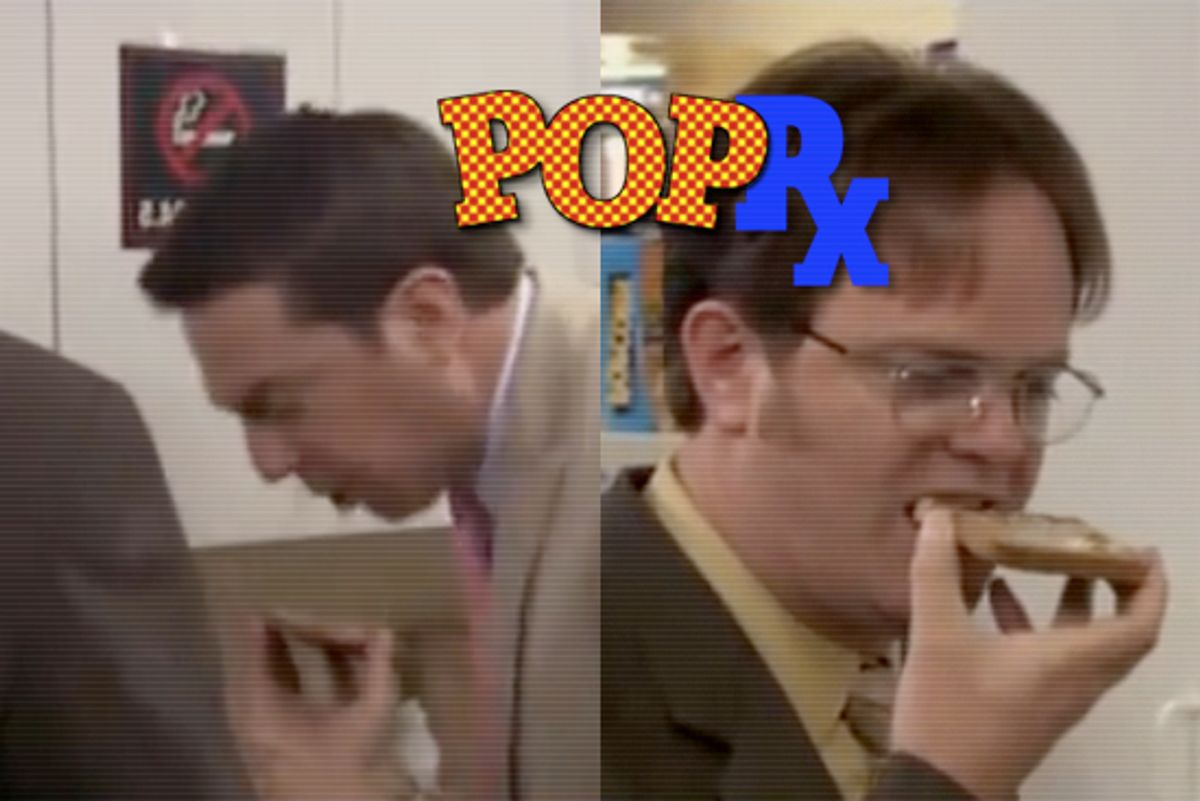 Welcome to PopRx, a new weekly column on Salon. As a physician (pediatrician, to be exact) in the San Francisco Bay Area, I spend my days taking care of children and families. But in today's world, popular culture and media have a much stronger influence on our ideas about health and medicine than a visit to a doctor's office. So I'm writing PopRx to explore just how culture influences  patients -- and doctors. I hope you'll read along, and send in your own questions.

For my first column, I'd like to critique a Dundler-Mifflin staff meeting about how to stay healthy during the flu months. Pam is introducing her dysfunctional, endearing colleagues to the benefits of hand-sanitizing gel when snarky Dwight cuts her off.

"The worst thing you can do to your immune system is to coddle it," he says. The immune system is strengthened by exposure to as many pathogens as possible, he explains. In fact, the company ought to hand out hand de-sanitizer -- "a simple bowl, placed at every juncture, filled with dirt, vomit and fecal matter."

Cut to the break room later, where Andy intentionally sneezes on his toast.

It's all quite funny. But that scene is also illustrative of a popular, but often misunderstood, medical science known as the "hygiene hypothesis." The hygiene hypothesis was first described in 1989 in a couple of fairly unassuming paragraphs of a medical journal by a British physician and researcher named David Strachan: "Over the past century declining family size, improvements in household amenities, and higher standards of personal cleanliness have reduced the opportunity for cross infection in young families. This may have resulted in more widespread clinical expression of [allergic] disease, emerging earlier in wealthier people, as seems to have occurred for hay fever."

In other words, as the rich get richer (and have smaller families), their allergies increase from a lack of shared germs. All of that might lead you to believe, like Dwight, that we need to throw away our soap and dig back into the mud  like pigs. Not quite.

The first problem with Dwight's take on the hygiene hypothesis is that he is confusing immunity against infection with protection against allergies. The second is that by the time you're old enough to eat phlegm-drenched toast for breakfast, it's too late to confer ironclad immunity against infection or allergy, because you need to develop it in early childhood. (Perhaps, in his toilet-side collection of medical journals, Dwight confused the hygiene hypothesis with a recent study showing that infants and toddlers in daycare who get sick a lot tend not to get sick as often once they hit kindergarten and beyond. Details, Dwight. Details!).

The biggest problem, though, with this pop culture view of the hygiene hypothesis is that in two decades of research since Strachan first made his comments, things are turning out to be far more complicated than anyone imagined. In short, research is showing that exposure to some bugs and allergens at an early age can protect us from allergies, while others do the opposite,  triggering your body's immune system to go haywire and exacerbate allergic symptoms. Why one trigger would protect while the other irritates our bodies probably has everything to do with how our immune system reacts and is regulated, though many details are still beyond our scientific grasp.

Still, it's worth noting that at least one expert thinks that, fundamentally, the hygiene hypothesis is going to hold up. Graham Rook, a professor at the Centre for Infectious Diseases and International Health at the Royal Free and University Medical School in London, sees what he calls the disappearance of "old friends" from our environment -- microorganisms that were once abundant and harmless, but are now absent from everyday life, thanks to changes in our lifestyle over the past century. According to Rook (who spoke about this to a European medical journal a few years ago), it is the disappearance of these "old friends" that might cause allergies and autoimmune diseases, because their presence used to teach our immune system not to react to everything that it came across. They include bacteria as well as certain parasites (aka worms). He said, "What I think is so interesting about [parasites] is that they really have disappeared from our environment. In Europe it was probably the pinworm that was the last one to become really quite uncommon and that happened at about the right time for these massive increases [in allergies] in the 60s and 70s."

If you're wondering, like I am, what doctors or drug companies are doing with all of this knowledge to prevent allergies, you'll be disappointed to hear the answer: not much. That's because even after 20 years, debate, discussion and research about the hygiene hypothesis is still very much in its infancy. Specifically, it seems, drug companies aren't ready to invest dollars into ideas that are still evolving.

To get back to "The Office," it's clear that Dwight has it all wrong. To help him and others get it right, many scientists have called for the phrase "hygiene hypothesis" to be stricken from the lexicon, replaced perhaps with something more accurate, albeit less alliterative, like the "microbial exposure hypothesis," to return the focus to the role of the microorganism in educating the immune system.

In the meantime, "Office" fans, do what you normally do: Listen to the sense and sensibility of Pam. Wash your hands (though it's worth considering whether hand sanitizer is really the best way to do that), cover your cough and please don't go out and eat worms for lunch or sneeze on your co-workers' toast.