Gold, guns and anti-gay: State legislatures have become havens for the battiest Tea Party ideas ever 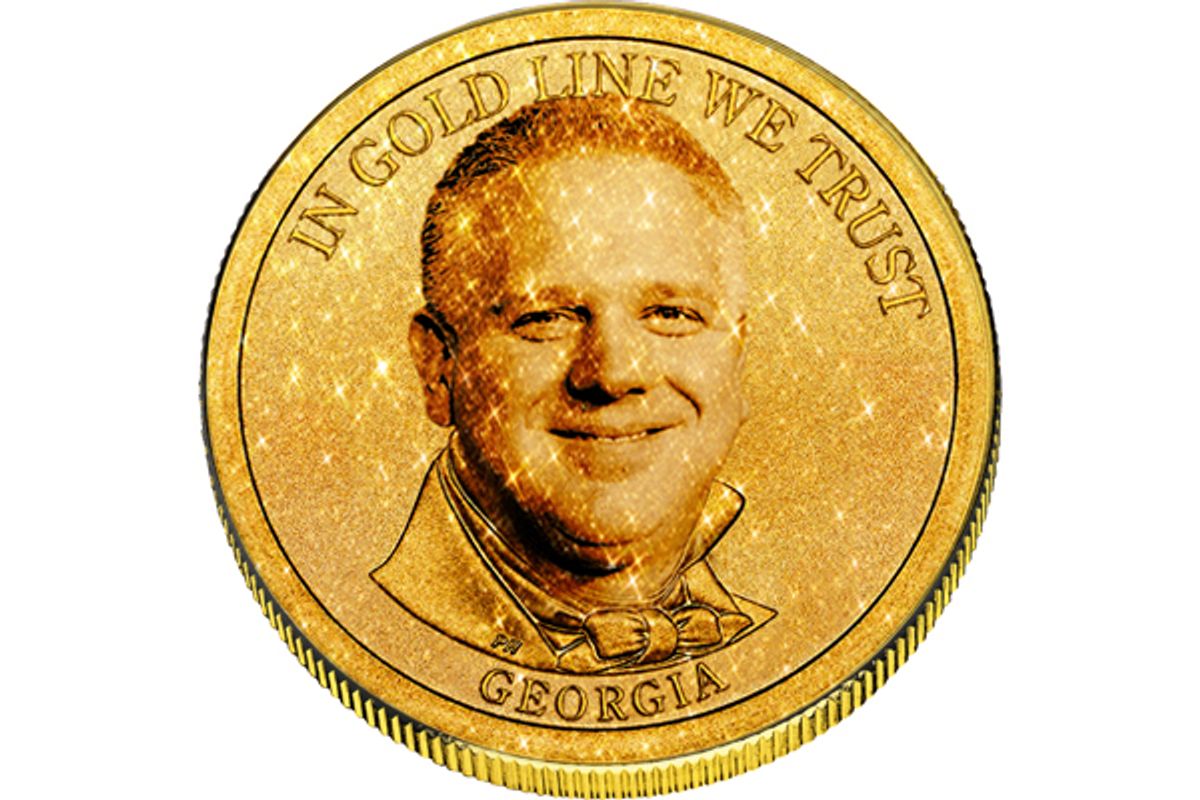 With the new Tea Party presence in Washington, a fair amount of attention has been paid to extreme legislation proposed by emboldened conservatives in Congress. But you haven't seen anything until you check out what's going on in America's statehouses.

Earlier this month, news broke about a bill making its way through the South Dakota Legislature that, under one interpretation, would have made it legal to kill abortion providers. While that measure was, after a loud public outcry, shelved, it's actually just the tip of the iceberg. From bizarre schemes involving gold to outright advocacy of nullification, state legislative chambers across the country have become havens for the wildest, most zany dreams of the Tea Party crowd.

Here are nine of our favorite proposals that are -- we kid you not -- actually pending in state legislatures today.

A legislator in Montana has introduced "an act stating Montana’s position on global warming; and providing an immediate effective date." Under the bill, the Legislature would make an official finding not only that " global warming is a natural occurrence and human activity has not accelerated it" but also that "global warming is beneficial to the welfare and business climate of Montana." There is no elaboration in the bill on that final claim.

For the inevitable Massachusetts invasion of New Hampshire ...

Several Tea Party favorites in the New Hampshire Legislature have introduced "an act establishing a permanent state defense force." The bill allots roughly half a million dollars per year in order "to defend this state from invasion, rebellion, disaster, insurrection, riot, breach of the peace or imminent danger thereof, or to maintain the organized militia."

The individual mandate ... for guns

An act to "to provide for an individual mandate to adult citizens to provide for the self defense of themselves and others" was introduced by five South Dakota legislators. They are primarily trying to make a point about the federal healthcare mandate. But the bill would require adults to obtain a gun "sufficient to provide for their ordinary self-defense" within six months of turning 21.

At least six bills have been introduced in the Montana Legislature to nullify federal legislation. (Remember what happened last time we had this debate?) Among the proposed laws is "an act nullifying and voiding the federal Endangered Species Act in Montana. Other measures would declare healthcare reform unconstitutional and make it a crime to enforce federal gun laws.

Who needs the U.S. Mint when we have gold?

Georgia state Rep. Bobby Franklin, a Republican, has introduced the "Constitutional Tender Act" to require the exclusive use of gold or silver for payment of state debts. It would also require banks that take state money to accept and offer gold. But not just any gold. The bill specifies that "pre-1965 silver coins, silver eagles, and gold eagles" be used.

In South Carolina, meanwhile, a state representative wants a commission to study the creation of an "alternative sound currency" in case of a "breakdown of the Federal Reserve System."

Because 26 constitutional amendments is just too many

A law proposed by immigration foes in the Arizona Legislature is designed to force the U.S. Supreme Court to revisit the meaning of the 14th Amendment, which extends citizenship to any person born in the United States. The proposed HB 2561 says that birthright citizenship only applies if at least one parent is a citizen or legal permanent resident of the U.S. Thus, the children of illegal immigrants would not be citizens of the U.S. (and, indeed, would not be citizens of any country if they are born in America).

The "Religious Conscience Protection Act," introduced in the Iowa House in response to the legalization of same-sex marriage in the state, would make it "legal for an Iowa business owner who cites religious beliefs to refuse to provide jobs, housing, goods or services to people involved in a marriage that violates his or her religious convictions." The ACLU of Iowa calls the bill "an effort to legitimize discrimination under the guise of religious liberty."

A Connecticut legislator last month followed at least 10 other states in introducing a birther-inspired bill -- "An Act Concerning Qualifications to Appear as a Candidate for President or Vice-President on a Ballot in This State" -- that would require presidential candidates to produce their birth certificate to show they are natural-born citizens. If passed, the bill would cover Barack Obama's 2012 candidacy.

A Florida representative introduced "an act relating to the privacy of firearms owners," which would make it a third-degree felony for a doctor or nurse to inquire about a patient's firearm ownership. That level of felony is punishable by up to five years in prison. The bill was introduced after a pediatrician allegedly told a mother to find another doctor after she refused to tell him whether she kept guns in her home.

With research assistance from Teresa Cotsirilos and Justin Spees