Which 3 Republicans will step forward to compromise in Wisconsin? 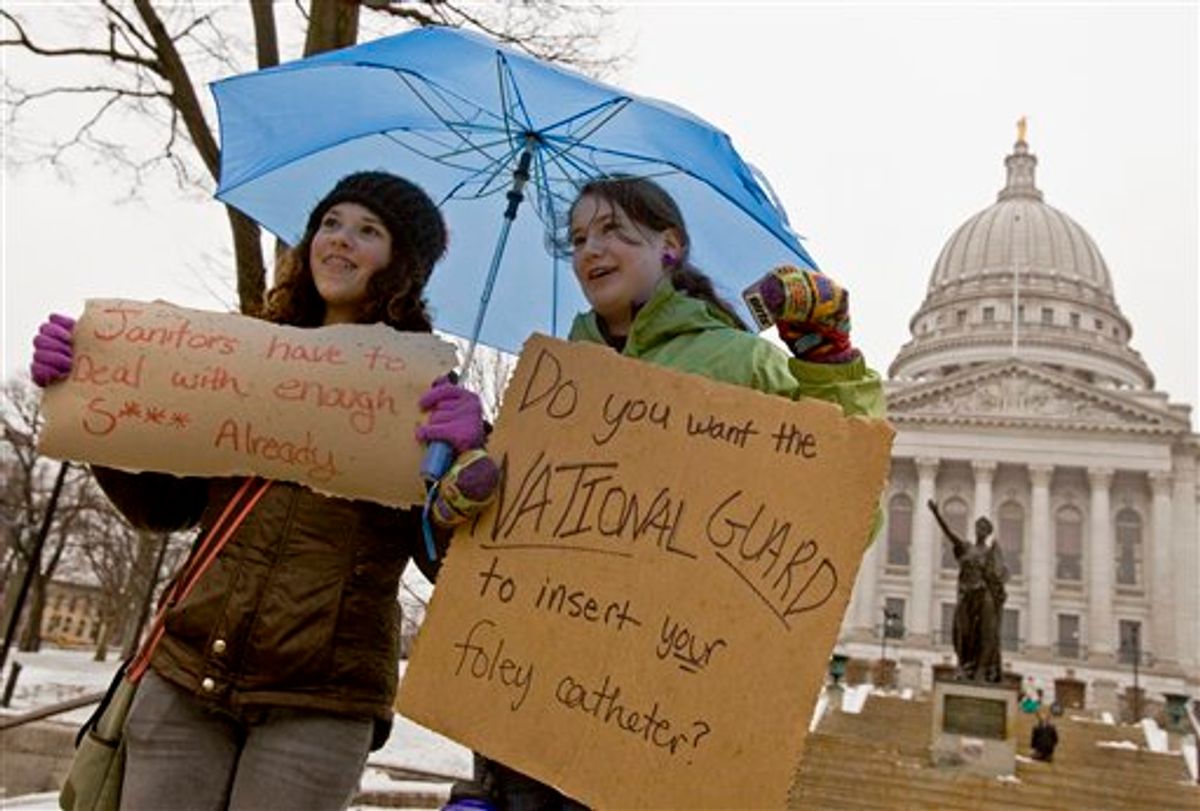 Jane Moran, left, 14, and Emma Rankin-Utevsky, 14, protest outside of at the State Capitol in Madison, Wis., Sunday, Feb. 20, 2011. Opponents to the governor's bill to eliminate collective bargaining rights for many state workers are on their sixth day of protesting. (AP Photo/Andy Manis) (AP)
--

To end a high-stakes stalemate over union rights that has captured the nation's attention, a handful of Republican lawmakers in Wisconsin might have to stand up to their new governor.

Gov. Scott Walker made clear Sunday he won't back off his proposal to effectively eliminate collective bargaining rights for most public employees. Senate Democrats who fled the state last week to delay the plan vowed not to come back to allow it to pass -- even if they have to miss votes on other bills Tuesday. And union leaders said they would not let up on protests that have consumed Wisconsin's capital city for a week and made the state the center of a national debate over the role of public employees' unions.

That dynamic means it might take Republicans in the Legislature who believe Walker is going too far to try to break the impasse. One idea that has been floated by GOP Sen. Dale Schultz would temporarily take away bargaining rights to get through the state's next two-year budget, then immediately restore them.

While it's unclear whether that would be acceptable to his colleagues, Democratic Sen. Jon Erpenbach said in a phone interview from the hotel room in Chicago where he's hiding out that Schultz was brave for making the proposal. He said Schultz, of Richland Center, and five or six other Republican senators who have ties to organized labor are in the best position to get both sides to negotiate a deal.

Protesters who crowded inside the Capitol for a sixth day Sunday had a similar message. They hung a banner in the Capitol reading "Wisconsin needs 3 cou(R)ageous Senators," referring to the number of Republicans needed to join with Democrats to block the bill.

So far, there's little evidence of a move to compromise. "Won't happen, won't happen, won't happen," said Senate Majority Leader Scott Fitzgerald. The Juneau Republican said he spoke with every member of his caucus over the weekend and they remained "rock solid" in their support for Walker's plan, even if they had some internal disagreements earlier.

Fitzgerald said Republicans could not back down now because the governor's two-year budget blueprint, to be released in coming days, slashes spending for public schools and municipal services by $1 billion or more. Local government leaders will need to make cuts without bargaining with employees, he said.

Walker's plan would allow unions representing most public employees to negotiate only for wage increases, not benefits or working conditions. Any wage increase above the consumer price index would have to be approved in a referendum. Unions would face a vote of membership every year to stay formed, and workers could opt out of paying dues.

The plan would also require many public employees to cut their take home pay by about 8 percent by contributing more of their salaries toward their health insurance and retirement benefits. Union leaders said their members are willing to accept those concessions, but they will not give up their right to collectively bargain.

Mariah Clark, an emergency medical technician at the University of Wisconsin hospital and a volunteer firefighter, said she stands to lose $250 per month with the benefits concessions. Standing on a bench holding a sign reading "EMT. Firefighter. Not the public enemy," she said the pay cut would hurt, but that's not why she was protesting.

"I really believe this is about workers everywhere, not just public employees," said Clark, 29. "It's pathetic that in Wisconsin, one of the places where the labor movement started, that this would happen."

Wisconsin was the first state to enact a comprehensive collective bargaining law in 1959. It's also the birthplace of the American Federation of State, County and Municipal Employees, the national union representing all non-federal public employees, which was founded in 1936 in Madison.

Walker said the concessions would help close a projected $3.6 billion budget deficit through June 30, 2013, and the changes to weaken unions would pave the way for local and state governments to operate more efficiently for years to come.

The Republican-controlled Assembly is expected to meet Tuesday to consider the plan. With Senate Democrats in Illinois, Fitzgerald said the Senate would meet without them to pass non-spending bills and confirm some of Walker's appointees. While Republicans are one vote short of the quorum needed to take up the budget-repair bill, they need only a simple majority of the Senate's 33 members to take up other measures.

Senate Minority Leader Mark Miller, speaking from "an undisclosed location in northern Illinois," said it's up to Republicans who privately have concerns with Walker's plan to force the governor to compromise.

"I think it's important those talks begin because there's a lot of Republicans that are uncomfortable with stripping away the rights of workers," the Monona Democrat said. "They recognize public workers are their constituents and neighbors and want them respected. We need to find a way for those Republicans to be able to be part of a solution."