The site unveils new options for broadcasting your romantic life. A word of caution: It's complicated 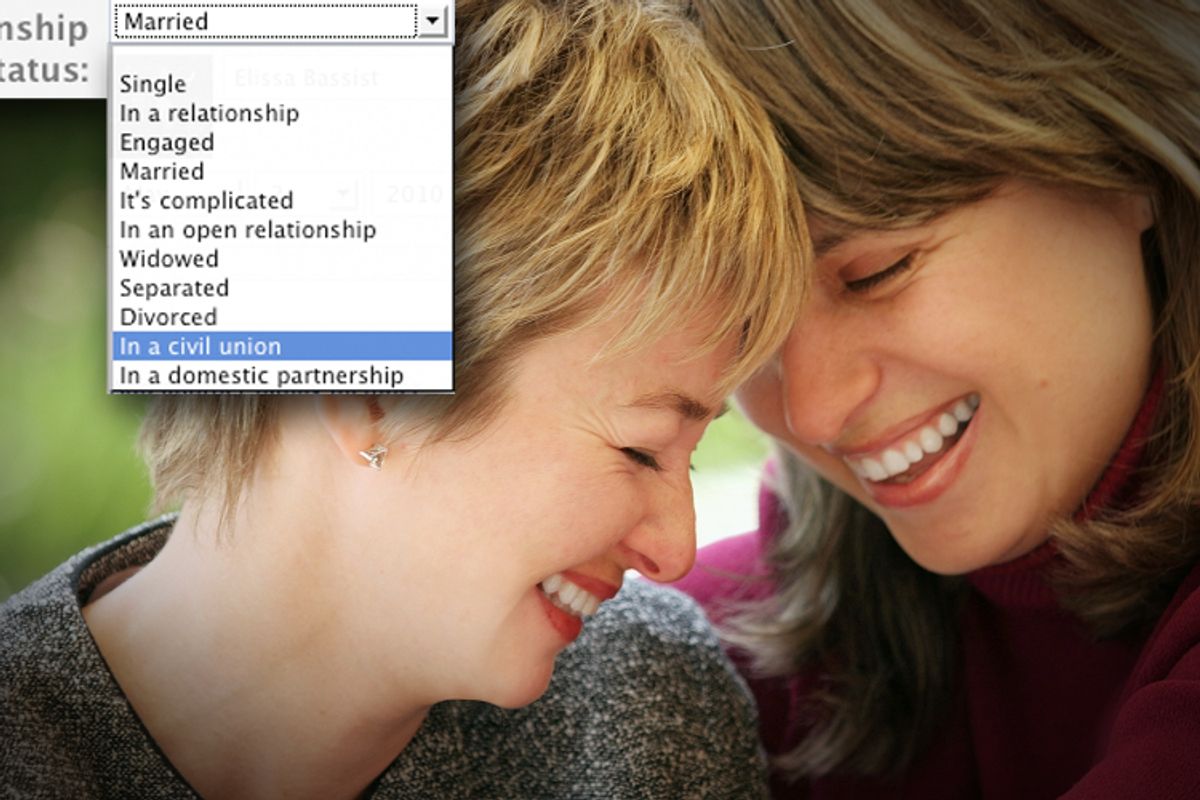 Welcome, gay couples, to our virtual soap opera! Facebook has finally added two new same-sex-friendly options for publicly defining your love life: civil unions and domestic partnerships. Perhaps forecasting the roller-coaster ride of relationship status updates, this revelation was followed by news of an app that notifies you when certain friends' romantic status changes. This is good news for those who are anxiously awaiting their shot at love with a committed friend -- or, more realistically, those merely looking for some rebound sex (prepare for a romantic comedy based on this very premise) -- but it also reminds us of the inherent drama and idiosyncrasies in that one little data field.

It took me a week to change my status after breaking up with my boyfriend of nearly three years -- and it was a conversation that we had separate from the actual breakup talk. There was the breakup, and then there was the Facebook breakup. Most often when a friend officially ends their relationship, I hear about it first through Facebook. The sagas that play out in our "news feed" are often as addictive and compelling as any TV romance -- if not more so because they're also real. (The short film "A Life on Facebook" illustrates this beautifully.)

But those who have had that broken heart icon show up on their page, announcing their singlehood, are often much more cautious about participating in this online narrative. Not only is that icon a bit much to take post-breakup, but it inevitably invites comment -- from everyone from your best friend to your grandma. After a bad breakup, a friend of mine swore off ever listing her relationship status -- at least until she gets married (although she's watched more than one friend go through a Facebook divorce). She's in the minority, though: An estimated 60 percent of users opt in.

Not everyone who opts in takes it seriously, though. About a year ago, I took a Facebook wife: my roommate and good friend. It began as a joke: We lived together, shopped for groceries together, did laundry together -- it was like we were married! So we made it official on Facebook. I was newly (and anxiously) single, and it was a means of protesting the whole idea. We weathered the initial storm (her relatives took it seriously, convinced that gay old San Francisco had finally gotten to her) and remain Facebook wives even though she has since moved across the country.

Even some of those who take their relationship status seriously find ways to be duplicitous about it: I discovered through a mutual friend that someone I'd dated in the past -- who had gotten back in touch with me shortly after the broken heart showed up on my page -- had adjusted his privacy settings to block me from seeing his relationship status, which was "in a relationship." This is part of why the site for the Breakup Notifier app got 700,000 hits in the 36 hours after its launch: Where there is love and romance there is also scheming, calculation and competition. I'm sure evo-psych experts could spill a river of ink on how Facebook relationship statuses tap into our most primal instincts.

One of the best scenes in "The Social Network" is when Mark Zuckerberg comes up with the idea for "relationship status." After a sleepless night of coding, a friend asks him whether a girl in his art history class is single, and he responds in frustration: "People don't walk around with a sign on them that says, 'I'm --.'" Cue: Game-changing revelation. Later, he explains to his business partner, "This is what drives life in college: Are you having sex or aren't you? It's why people take certain classes and sit where they sit and do what they do ... that's what The Facebook is gonna be about." The truth is that's what drives life, period.

The public drama of relationship status updates may seem brand-new, but it's not. As Nancy Baym, author of "Personal Connections in the Digital Age," told the New York Times recently, "What is a wedding ring, but a status report?"