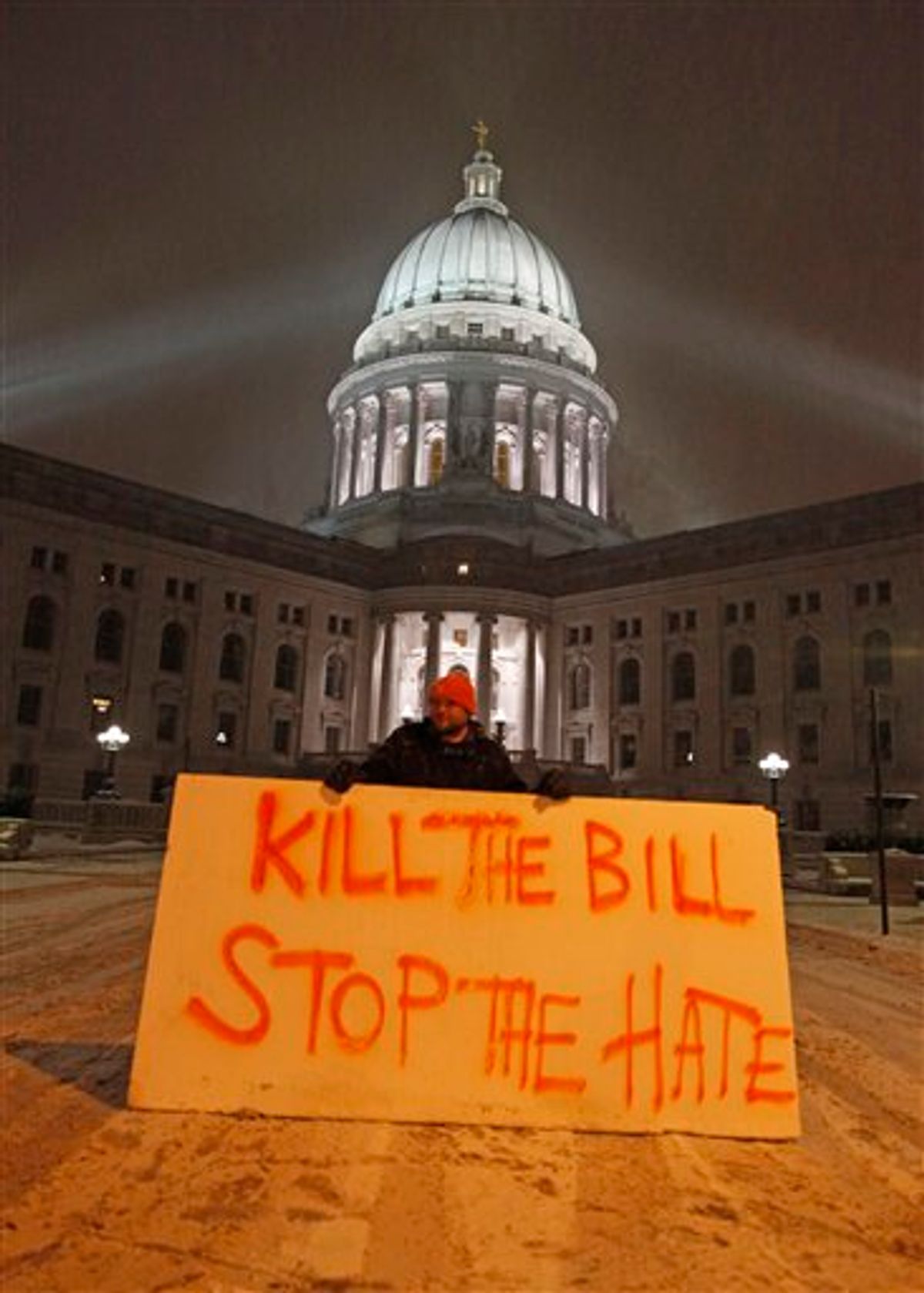 It's the bureaucratic budget legalese shot heard 'round the world! On Monday, "Ed" at the blog Gin and Tacos unearthed a gem from Wisconsin's Budget Repair Bill that appears to be a smoking gun connecting Gov. Scott Walker to the notorious libertarian Tea Party puppet masters, the Koch brothers.

16.896 Sale or contractual operation of state-owned heating, cooling, and power plants. (1) Notwithstanding ss. 13.48 (14) (am) and 16.705 (1), the department may sell any state-owned heating, cooling, and power plant or may contract with a private entity for the operation of any such plant, with or without solicitation of bids, for any amount that the department determines to be in the best interest of the state. Notwithstanding ss. 196.49 and 196.80, no approval or certification of the public service commission is necessary for a public utility to purchase, or contract for the operation of, such a plant, and any such purchase is considered to be in the public interest and to comply with the criteria for certification of a project under s. 196.49 (3) (b).

Over the next 24 hours that paragraph rippled through the left-wing blogosphere at lightspeed. And for good reason. Koch Industries is a conglomerate with operations in scores of energy-related fields. There is no question that directly and indirectly, the Koch brothers contributed significant funds to Walker's election. There's also plenty of evidence that no-bid contracts are an invitation to cronyism and backroom deals. The blanket authorization that Walker's bill offers for cutting deals with the private sector to get rid of state assets is blatantly undemocratic.

But while it is fair to call Koch Industries an energy conglomerate -- subsidiaries are involved in oil and gas refining, coal transport and the manufacturing of equipment that is used in power plants -- the Kochs, as far as I can tell, do not seem to be in the business of actually buying, selling or operating "heating, cooling and power plants."

At RortyBomb, Mike Konczal writes that "the attempt to break labor is part of the same continuous motion as saying that the crony, corporatist selling of state utilities to the Koch brothers and other energy interests is the new 'public interest.'" I have no problem with this statement in principle, but I think we should be careful in making the claim that the Walker bill is paving the way for Koch Industries to buy Wisconsin state assets, because it is not at all clear that the Kochs are in the market for those specific assets.

Maybe this is too fine a point. Koch Industries owns a subsidiary in Wisconsin that delivers coal to power plants. Maybe a privatized power industry in Wisconsin will steer more business to the Kochs. But I don't think we have to work so hard to connect the dots between the Koch brothers and Walker. The Kochs have poured hundreds of millions of dollars into election campaigns all over the country in support of a comprehensive political agenda pushing privatization and deregulation and opposing action on climate change. Their support of Walker fits that agenda to a tee ... (party.)

UPDATE: Greg Sargent reports that the Koch-funded group Americans for Prosperity is set to bankroll anti-union TV ads in Wisconsin. Sargent's conclusion seems right on the money to me:

And in truth, there's no evidence that Walker needed to have his strings pulled by the Koch brothers to pursue his drive against the unions, something he's relished for years.

That said, the fact that Americans for Prosperity is now going up on the air in Wisconsin makes it clear that this is about something far larger than getting the state's finances under control, and underscores the degree to which this has become, for the right, a national ideological war.