The moral imperative for deficit cutting

The political hysteria over the federal budget isn't about economics. This is a morality play, pure and simple 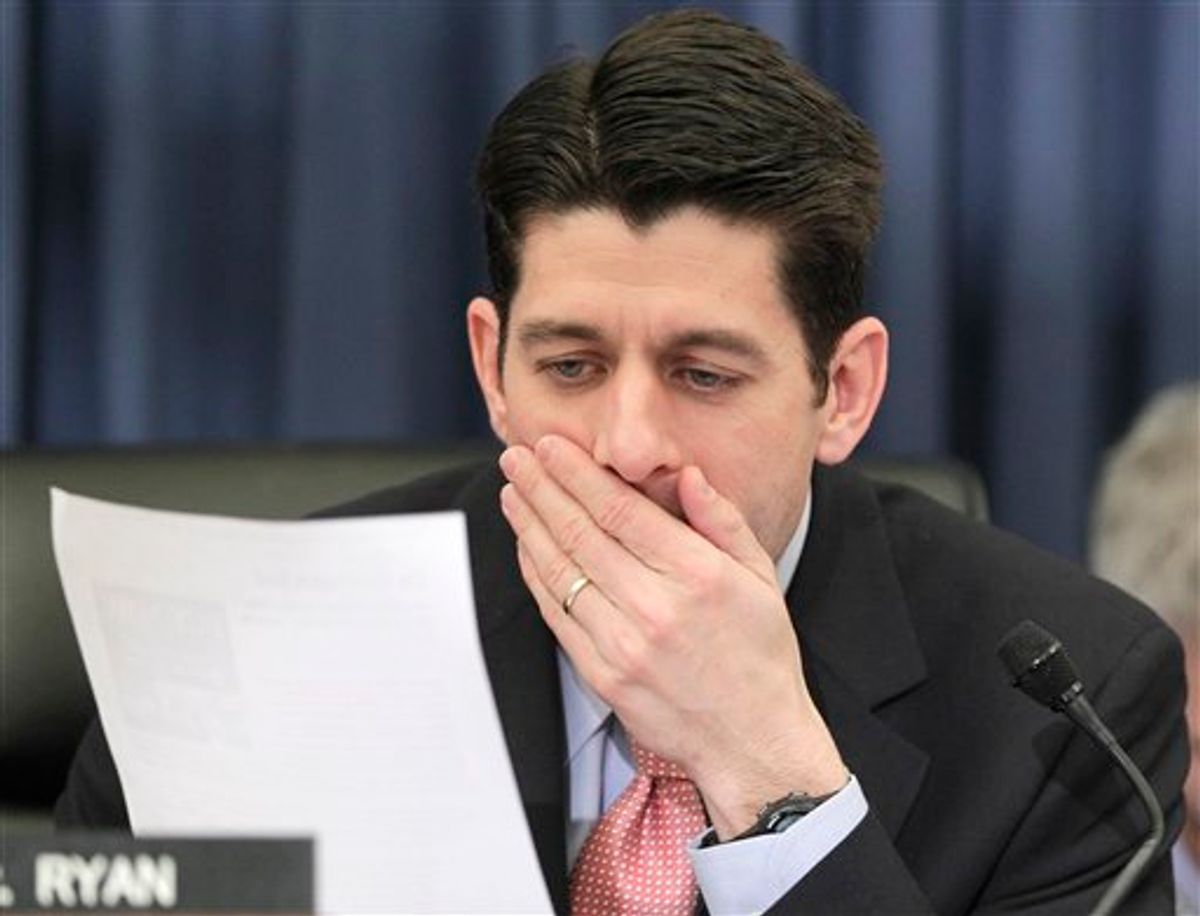 The majority of Americans want a government that serves the people.

He's right. Finally, one politician who recognizes that the hysteria about federal budget deficits and debt has nothing to do with economics. There is no credible economic theory and no economic evidence that can lead one to conclude that the U.S. needs to reduce its budget deficit during a time of widespread unemployment.

It is a morality play, plain and simple.

It is, as Ryan says, a debate about "different ideas about government." It is about "should," not "can." The government can provide a safety net that feeds our poor, that houses our homeless, that cares for our sick, that hires our jobless, that supports our aged in dignity. There is no question of affordability -- sovereign government can always afford to "credit bank accounts" (as Chairman Bernanke puts it) using keystrokes. The question is, should the government do so?

On one side, we have the modern Hooverites, including Ryan. Nay, they say, government should not help its citizens. Quoting Grover Cleveland, Hoover used remarkably precise Ryanesque words: "Though the people support the government, the government should not support the people." President Reagan modernized that with the argument that "government is the problem." (And just to prove that Democrats can be Hooverish, too, President Clinton's slogan was "The era of big government is over.") Ryan puts it this way: "Let's choose to put proper limits on our government and unleash the initiative and imagination of the world's most exceptional people."

It is not clear who those "exceptional" people are, but the past two decades have demonstrated beyond a reasonable doubt that as government withdraws, it is Wall Street that is unleashed -- the "initiative and the imagination" of the Bernie Madoffs, Jamie Dimons, John Macks, Joe Cassanos, Dick Fulds, Bob Rubins, Angelo Mozilos and Lloyd Blankfeins run loose. And when they crash the economy, causing unemployment and poverty to explode, according to Ryan's moral compass government should do nothing to help its citizens.

On the other side, we've got the modern New Dealers, who know that unbridled capitalism inevitably devolves to thievery. You need government to protect its citizens from the excesses. To be sure, New Dealers recognize the benefits of Schumpeterian entrepreneurial spirit, but they share the skepticism of Adam Smith who said that our captains of industry rarely meet except to plot against the best interests of our nation's workers and consumers. And they know that each time we experimented with laissez faire, it led to economic depression, brought on by the robber barons and their Wall Street financiers in the late 19th century, the Wall Street investment bankers of the 1920s, and the Wall Street investment bankers (yet again!) in the 2000s. (Does anyone see a pattern?)

Sandwiched between the Hoovers and the New Dealers, we've got the Clinton-Obama New Democrats who want to please Wall Street in order to keep the campaign dollars flowing, while also preserving some modicum of a safety net. Thus, they adopt the schizophrenic deficit dove position: Deficits are OK now, to clean up the mess caused by Wall Street, but we've got to rein-in "entitlements" to balance the budget once the crisis is past. Oh, and let's not mess with Wall Street, which has surely learned its lesson this time around. These New Dems are unwitting and unscripted characters in a morality play they do not understand, confusing economics for morals. Hence, they hold their noses and side with the New Dealers for the current deficit debauchery, but to atone for their sins go with the Hoover deficit hawks for balanced budgets in the sweet hereafter.

Here's the problem for the Moral Right and the Schizoid Center. In poll after poll, the American people consistently reject spending cuts for any program other than "foreign aid." Indeed, they want more federal government spending for education, veterans' benefits, (national) healthcare and Medicare -- areas our morality warriors plan to cut. According to the recent Pew survey, 45 percent of Americans are willing to cut global poverty assistance; no other category of federal government spending comes close to achieving a majority in favor of cuts, as the following table demonstrates. (Find the full report here.)

Note that aside from global poverty assistance, only military defense and unemployment assistance find slightly more support for cuts than for spending increases; in all other areas, Americans favor more spending. Even Medicare -- a favored target of deficit hawks -- finds nearly three times more Americans favoring spending increases than the tiny minority willing to cut it. And Social Security remains the most popular government program ever -- no matter how often the deficit hawks tell Americans that no progress can be made on deficit reduction without gutting Social Security.

Disingenuously, Rep. Judy Biggert claimed that Republicans "have a mandate from the American people to cut spending." They have nothing of the sort. The mandate is loud and clear: Americans want investment in all those areas that will improve the quality of life now and in the future.

Nor do Americans want higher taxes -- except on the super rich. But since the super rich are the natural constituency for the Moral Minority and the New Dems, that idea has no chance.

In short, the problem is that if democracy ever had its way in America, the government would be substantially bigger, not smaller, and more generous, not less. Americans decisively reject modern Hooverism, in spite of the anti-government campaign run out of Washington over the past 30 years.

So what can the Moral Minority do? Deceive. Obfuscate. Scapegoat. Talk about "unfunded mandates," "unsustainable deficits," "debt burdens on our grandkids," "government is running out of money," "welfare queens," "illegal deadbeat aliens," "national bankruptcy." All deceptions.

I hope that Rep. Paul Ryan's admission that deficit hysteria is really about morality, not economics, gets wide coverage. The American people need to know that the morality campaign is well-financed by hedge fund manager Pete Peterson's billions. He and Ryan want to push their Moral Minority views on the Moral Majority.

But the Moral Majority of this country wants more education, not less. Americans want more publicly funded healthcare, not less. They want to help the homeless get off the streets. They want to help grandma and grandpa live a decent life in retirement. They support nutrition programs for mothers and infants. They want to rein in Wall Street and to jail the crooks. And they want government to play its appropriate role in all these matters.

And most of all, they want to leave the world a better place for the generations of Americans to come. As such, they do not, as Ryan put it, "choose to relegate America to another chapter in the history of declining nations." They want no part of the "dog eat dog," "every man for himself," Hobbesian vision hawked by the Morality Minority.

They reject Ryan's "case for limited government" and instead want a government that serves its people.

Surely, in a democracy these spending and taxing issues should be decided by the voters, but in a process that is free of all the fear-mongering about deficits. The Moral Minority wishes to conceal the truth behind the deficit hysteria because it knows that the majority rejects the minority's position as immoral.

Yet, all of these are components of the Moral Minority's unpalatable platform. No wonder Ryan wants to hide behind his "moral imperative" to cut government -- to keep the debate in the religious arena of morality and away from the light that economics might shine upon it.

L. Randall Wray is professor of economics at the University of Missouri-Kansas City.