A loud, sustained national outcry may be taking a toll on Scott Walker's plan to neuter public sector unions 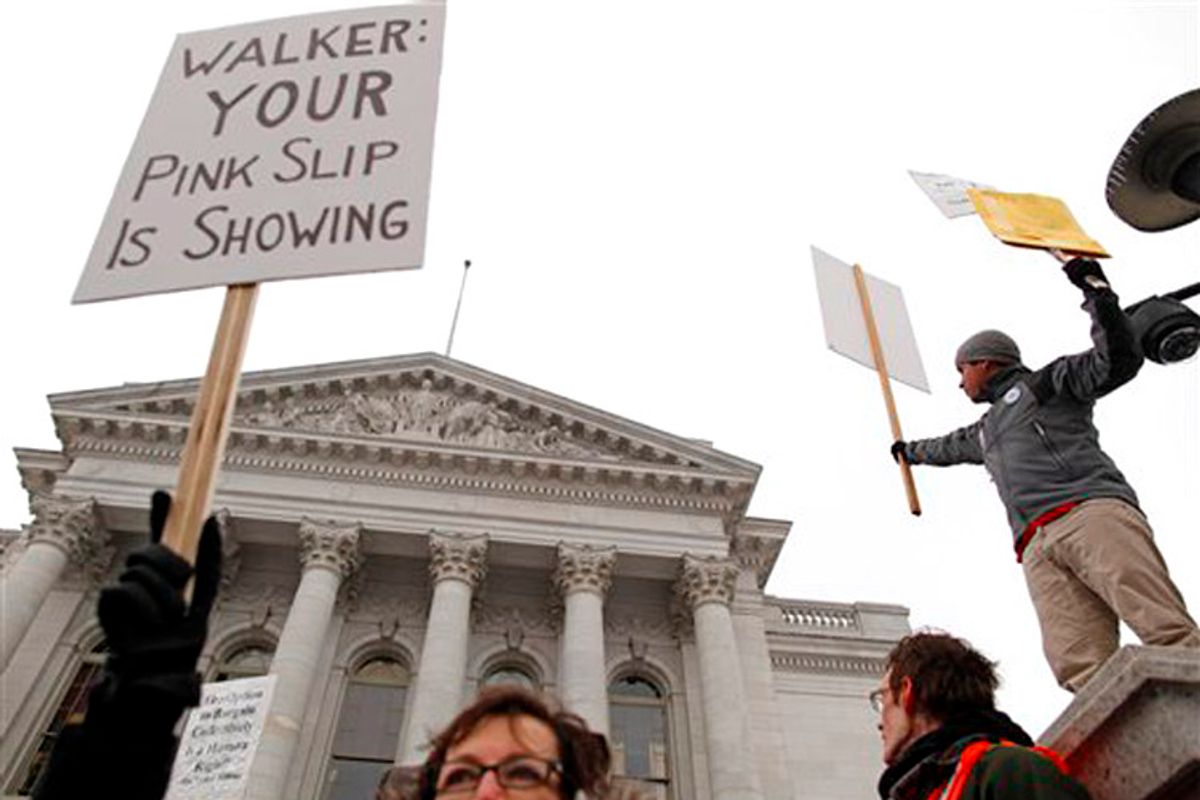 Protesters listen to a rally as sleet falls outside the state Capitol Monday, Feb. 21, 2011, in Madison, Wis. Opponents to Governor Scott Walker's bill to eliminate collective bargaining rights for many state workers are taking part in their seventh day of protesting. (AP Photo/Jeffrey Phelps) (Jeffrey Phelps)
--

There has been a frustrating lack of credible, independent polling data on the standoff over public employee unions in Wisconsin, which exploded into a national story late last week. So we still don't have a clear sense of where voters stand on Gov. Scott Walker's push to strip public sector workers of their collective bargaining rights.

But there is a new survey making the rounds that suggests a backlash may be stirring, with 52 percent of respondents opposing Walker's plan and 61 percent expressing a favorable view of public employees (compared with just 39 percent for the governor). Of course, the data comes with a catch: It's from a poll commissioned by labor and conducted by a Democratic firm (one that has a knack for coming up with results that are agreeable to Democrats but somewhat at odds with reality). So take it with a grain of salt.

Still, even if the numbers are somewhat off, the idea that Walker may be pushing his luck with public opinion certainly seems plausible.

As I noted last week, the governor entered this fight on stronger political footing than many appreciated. Wisconsin, despite its progressive, pro-labor tradition, isn't a particularly liberal state. Walker, who was elected last fall with 53 percent of the vote, is hardly the first Republican in recent times to win a statewide election there. Plus, public sector unions -- even in Democratic-friendly states -- just aren't that popular right now, with many voters (fairly or not) convinced that generous contracts and pensions have come at the expense of their state's fiscal well-being. Note that a national poll conducted by the Clarus Group last week (which should come with an asterisk of its own, just like this week's labor-funded poll) found that 64 percent of all Americans -- and 42 percent of Democrats -- said "no" to this question:

Against this backdrop, Walker's aggressive posture makes sense. But public opinion can also be a fickle thing, and the last few days have seen a loud, even more aggressive pushback from the unions and their allies accusing Walker of going too far, of pursuing an extremist agenda, and of being disingenuous about his motives. Wisely, the unions have taken Walker's specific contract demands -- for increased employee contributions for healthcare and pension plans -- off the table by agreeing to them. Thus, the debate now is being waged entirely over the matter of collective bargaining rights.

This puts Walker in a different category than other governors who are now taking on public employees. Andrew Cuomo and Chris Christie, for example, are making similar demands on healthcare and pension contributions, but they aren't calling for an end to collective bargaining. Thus, their moves are being met with predictable grumbling from the unions -- but they aren't provoking the much louder, broader national outcry that Walker has faced these past few days. It's not hard to imagine that this outcry, coupled with the news that the unions have agreed to Walker's basic demands (demands that tend to be very popular with voters), has prompted a fair number of Wisconsin voters to pause and wonder if maybe their governor -- whose basic goals they started out agreeing with -- isn't being just a little hardheaded and unreasonable.

Considering this possibility (likelihood?), Greg Sargent is now asking why Walker doesn't just accept the union's concessions, give up on the collective bargaining push, and declare victory. My guess would be that, just like the rest of us, he's waiting for more credible data on exactly how the standoff is playing with voters -- and to see if there are any new openings to exploit. He's also presumably hoping that the "fireside chat" he's scheduled for tonight (and asked Wisconsin television stations to carry live) will rally the public to his side and force at least one Democratic senator to give in.

Update: Another sign that this is an overreach: A new USA Today/Gallup poll finds that 61 percent of Americans would oppose a similar effort to impose the same bargaining restrictions on state employees in their home states.