My son, the pink boy

Moms ask if my "feminine" son is gay. Strangers tell me I'm being too permissive. Here's what they don't understand 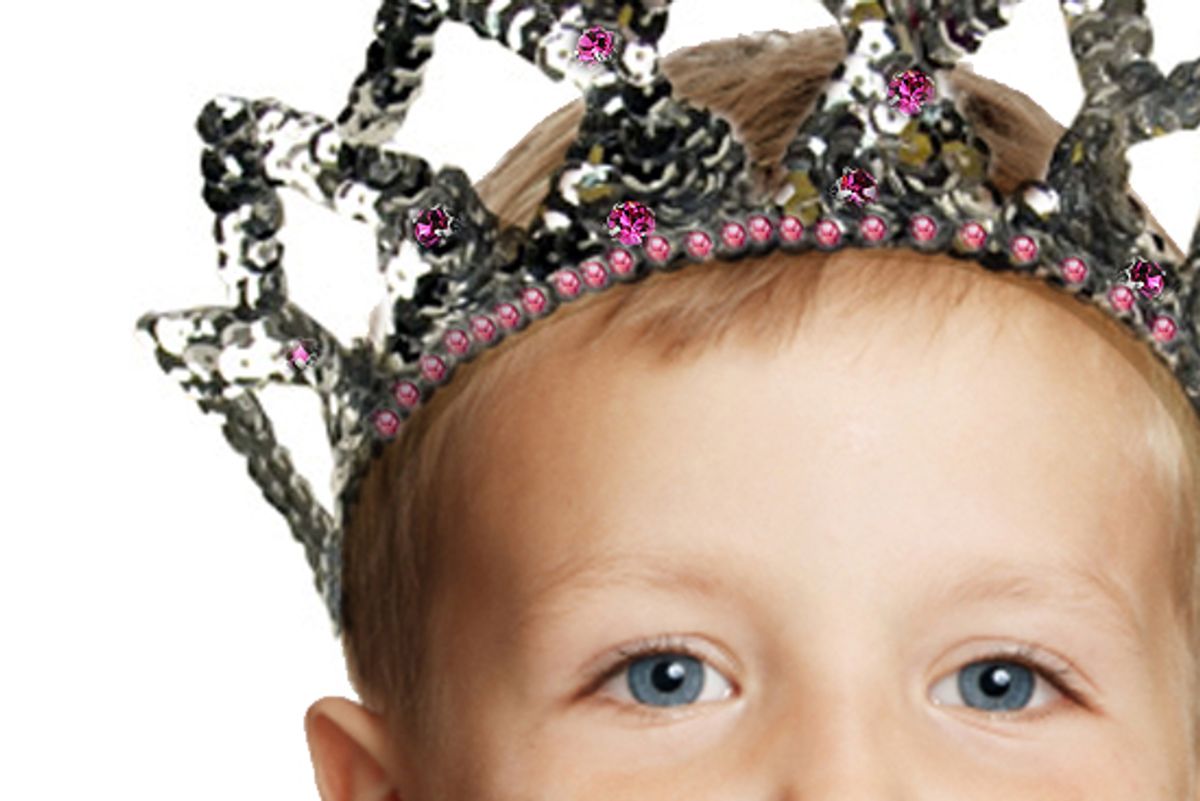 A random mom on the playground, looking serious and a little bit concerned, asks me, "Do you think your son might grow up to be gay?"

It's never crossed my mind. Really. Not since that last Random Mom asked me five minutes ago.

Random Mom looks at me like she knows something I don't.

Random Moms across America think they know: My son has got to be gay. He wears khakis today but wore a dress to school from age 4 to 6; he used to do ballet and still doesn't like sports; in preschool he was all about playing princess but now is all about Pokemon; and, in spite of the clear gender divisions in third grade, he plays with both girls and boys. I mean, what straight boy is into that kinda freaky gender mash-up?

Well, my husband, for one. And all metrosexuals, for another coupla-million-ish. My husband used to help his mother choose curtains. He now drives a motorcycle and hunts deer. He still likes curtains, which he now calls "window treatments" (How gay is that? Random Mom mutters). But really, haven't you met a guy like this, the one you think is gay when you first met him, but then realize that his sexuality doesn't match his gender presentation?

I recently discovered that America's favorite telepsychologist and I actually agree on that. Dr. Phil's website tells Robby, the mother of a 5-year-old boy who loves Barbies and wearing feminine clothes: "This is not a precursor to your son being gay."

I got a little excited reading this. The conflation of gender expression and sexuality is so ubiquitous in our society that it was refreshing to hear our country's second-highest-rated talk show host giving the same message to millions of Americans that I've given to dozens (literally dozens!) of Random Moms on playgrounds across my fair city. Reading on, however, the beautiful Dr. Phil/Ms. Hoffman mind-meld crumbles.

And does Dr. Phil really imagine that Robby's son will stop being interested in Barbie just because Robby throws his dolls in the trash? What kid forgets about his favorite toy just because it's been taken away? (What kid doesn't want the forbidden thing more when it's taken away?) As Dr. Phil advises Robby, Random Moms advise me to encourage my son to do "boy" things like play soccer and get fixated on trains. But really, has that ever worked? Think about it: How easy is it to force a tomboy into a dress? A girly-girl into playing football? And I'd really like to see Dr. Phil make a sports-loving he-boy wear Tinkerbell underpants. And like it.

Gender identity isn't something we just impose on kids and expect them to suck it up, like eating vegetables or going to school. It's part of who they are, whether that satisfies us as parents or not.

I write (under a pen name) about raising my gender-nonconforming son for magazines, radio, and my blog. I get all kinds of e-mail from readers telling me that if I just stopped encouraging my son to be girly that he'd man up and try out for the football team. Ah, yes: I am the All Powerful Mother, whose magic is strong enough to make boys run from Thomas trains to pink tutus. Really, I'm that good. And if I just directed my magic toward good and not evil, then my boy would become all boy.

The problem is that, as a mother, I'm too powerful. Or too weak. We're not sure which. Because I've also been told that I need to learn to parent forcefully, to learn to stand up and say NO. That my son wouldn't be like he is if I simply didn't allow him to be like he is. But here's the truth: I'm actually kind of a NO-saying badass. Check me out: Can we throw this baseball in the kitchen? NO. Can we eat chocolate cake for breakfast? NO. Can we make fun of the girl in the wheelchair? NO. I really can haul out a NO when I need to, and I whip it out many times a day. But I try to save NO for things that actually cause demonstrable harm to property, to my children or to other people.

Is it really my maternal strength/weakness that caused my son to adore pink Marabou-feather slippers at age 3? You decide. But consider that mothers have regularly been blamed for their children's -- especially their sons' -- quirks and challenges.

In the 1950s, psychologist Leo Kanner coined the phrase "refrigerator mother" and used it to blame mothers for causing autism in their children (needless to say, Kanner's theory was later discredited by actual science). From the academic paper Children, Work, and Family: Some Thoughts on "Mother Blame," we learn that mothers have similarly been blamed for a host of issues in their offspring including schizophrenia, bed-wetting, learning disabilities and, my personal favorite, "homicidal transsexualism."

You may remember momblogger Nerdy Apple Bottom (who goes by the name of Sarah -- no relation), whose November blog post My Son Is Gay went viral and has now generated over 46,000 comments. After her post, Sarah was chastised by her church for standing up to the other preschool mothers who criticized her and her son for the way he busted out of gender norms (on Halloween! We're not even talking about the glamfest that has walked out of my house on any old Tuesday). Her church accused her of "promoting gayness" and threatened to kick her out of the entire denomination.

The notion that parents are responsible for spreading gayness (like butter, or an STD) is one buoyed by conservative religious organizations like Exodus International and Focus on the Family. Focus' ousted founder, the famed radiovangelist James Dobson, offers his book "Bringing up Boys" as a guide for "parents to lay a healthy foundation for heterosexual identity for their children." In other words, to use reparative therapy to try to ungay them before the gayness spreads.

Joseph Nicolosi, founder of NARTH, the National Association for Research & Therapy of Homosexuality, penned the DIY reparative therapy bible, "A Parent's Guide to Preventing Homosexuality." NARTH has long and loudly argued that feminine boys are pre-homosexuals who can be ungayed with a just-so combination of a mom who backs off and a dad who takes his son out to pump gas and light the barbeque.

It would seem that Dr. Phil has torn a page from Nicolosi's book, a book in which Nicolosi tells parents to replace feminine toys, games and clothing with masculine ones, stressing the importance of "extinguishing feminine behavior" with "gentle and consistent disapproval." But where these two popular scolds differ is on the moral value of homosexuality.

Dr. Phil sides with the American Psychiatric Association, publisher of the "Diagnostic and Statistical Manual of Mental Disorders," broadly considered the arbiter of mental health. The APA declassified homosexuality as a mental illness nearly 40 years ago. Dr. Phil tells Robby, "If your son is gay ... it won't be a choice. It will be something that he's pre-wired to do." Elsewhere on his website, Dr. Phil tells a mother concerned about her lesbian daughter, "Homosexuality is not a learned behavior. A sexual orientation is inherited. You are wired that way." He asks, "What difference does it make if she is gay? Accept her, support her, and do not be judgmental. It is difficult enough for her to live openly and honestly in this society. Don't put your judgment on top of that."

But definitely rain that judgment down on your 5-year-old son.

So I'm really trying to figure this out. Dr. Phil tells us that it's OK to be gay (just like the APA), but it's not OK for boys to play with Barbie (just like NARTH), because ... well, that's where I get stuck. Because ... they might grow up to be gay? But ... they won't necessarily, he says. And around we go.

Perhaps Dr. Phil's thought process is just terribly muddled (the more charitable explanation among those I've considered). A more likely explanation is that Dr. Phil really isn't OK with homosexuality and thinks that it can be prevented in boyhood if you just chuck the Barbies and say NO. If so, he hides this message fairly well -- or at least confuses his viewers with his homos-good/proto-homos-bad schtick.

And speaking of confusion, Dr. Phil tells Robby, "Direct your son in an unconfusing way ... You don't want to do things that seem to support the confusion at this stage of the game."

Who's confused? My son knows exactly what he likes. When Sam was 4 and his male peers trick-or-treated as Batman and Spiderman and gorillas, Sam was a princess. At 5, he was a queen, regal and proud and full of the royal prowess that Disney offers all little girls. He liked feather boas and lip gloss and dancing. Did he think he was a girl? Nope. Was he confused about being a boy? Nope. Did he need to be taught what boys are supposed to like? Nope -- how boys are supposed to behave was abundantly clear from the trains and trucks we bought him before we realized he was a pink boy, the behavior of all the boys he knew, the messages on TV, and the judgments of all the Random Moms. He just liked what he liked, the way other kids did -- only his likes were different.

Anti-gay organizations are clear about why boys like Sam need to change. But Dr. Phil's muddled message reflects a broader, mostly unspoken cultural bias in America -- even among Americans who are accepting of gay people -- that femmy boys are somehow nebulously bad (though no one can actually articulate why). Dr. Phil -- or NARTH -- isn't making a stink over girls who wear jeans and play soccer. So what, exactly, is wrong with a boy who likes Barbie?

America, talk to me. I'm all ears. And if you can't think of an un-muddled answer, then think about this: Everywhere -- on playgrounds and in homes across America, in Disney movies and on national television, on high school and college campuses -- pink boys are the brunt of jokes, made to feel inferior, mocked until they take their own lives. Feminine boys are among the last people it's OK for our culture to hate.

Indeed, one of the most popular arguments against letting boys express their feminine sides is that people will make fun of them. Which makes me wonder: should we hide who we are because people are mean? Or should we -- parents, teachers, bystanders, infotainment talk-show hosts -- stand up and say it's not acceptable to make fun of people who are different?

Random Mom doesn't know who or what my son is going to grow up to be, any more than she knows who or what her kid is going to grow up to be. Whether or not she shares the judgments of America's religious conservatives and reparative therapists, or even Dr. Phil, she's repeating cultural biases that she's absorbed, raising her eyebrows at the things that might, to her, signal future gayness. In this I can hear the click of the first domino falling into the second in the cascade that flows from judgment to disapproval to bullying. As social acceptance of gay people grows, it's time to look critically at the lingering disapproval of things we once thought were precursors to gayness.

Because the problem ain't Barbies. It's bullies.