Will Wisconsin start a walkout trend?

Legislators in Wisconsin -- and now Indiana -- flee to defeat anti-labor bills. Will the tactic spread? 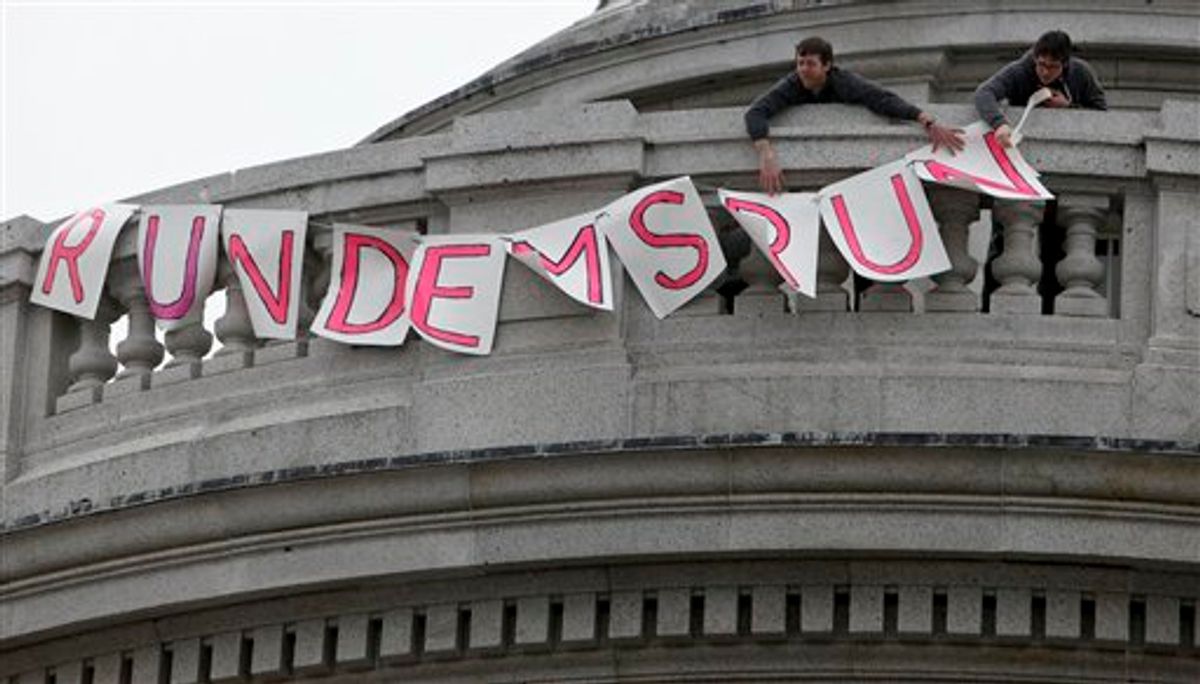 Two protestors put up a sign at the State Capitol in Madison, Wis., Thursday, Feb. 17, 2011, that reads "Run Dems Run" in support of 14 state Senators that have left the state in opposition to Wisconsin Gov. Scott Walker's bill to eliminate collective bargaining rights for many state workers. (AP Photo/Andy Manis) (AP)
--

Democrats in the Wisconsin state Senate have successfully delayed a vote on Gov. Scott Walker's anti-union measure by fleeing the state, thus robbing the Republican majority of the quorum needed to vote on the bill. Now, news has broken that Democratic legislators in Indiana have resorted to the same tactic in order to block an anti-labor measure in their state.

All of this got us wondering: Why isn't the walkout a more common weapon in legislative combat? To answer that question and get some historical context, I spoke with Brenda Erickson, a senior research analyst at the bipartisan National Conference of State Legislatures.

"There are only a handful of states that have any type of supermajority quorum requirement," says Erickson. "And those are the states where they can impact legislative business with potentially only a few legislators leaving."

That, in short, is why walkouts are so unusual. In most states, only a majority of legislators must be present for a legislative body to do business. Thus, a minority would not be able to stop a bill by fleeing the state, which is exactly what we've seen in Wisconsin. There, 14 Democrats have fled, depriving the 33-member state Senate of a quorum.

Four other states have supermajority quorum requirements, according to Erickson. They are Texas, Indiana, Tennessee, and Oregon.

All of that said, there is a long tradition of walkouts. The NCSL blog recently published a compilation of walkouts assembled by Erickson. The history goes back to at least 1839, when then-state Rep. Abraham Lincoln led a walkout to defeat a bill that would require Illinois to pay its debts in gold and silver rather than paper money. (Incidentally, an identical bill was just proposed -- in 2011 -- in Georgia.)

Oregon House, 2001: Minority Democrats walked out for five days on a dispute over redistricting. The House continued to meet every day in a futile effort to compel the attendance of missing members, but they were unable to do any other business for lack of a quorum. After the Democrats returned to the chamber, the Republican majority eventually passed its redistricting plan, but it was vetoed by Gov. John Kitzhaber (D). Since the Democrats knew all along that they had the governor on their side, the move was largely symbolic to make a point.

It's worth remembering though, that walkouts are not always successful. In 2003, 51 Democratic legislators in Texas left the state in an effort to kill a congressional redistricting bill that was drawn up by Congressman Tom DeLay. The Democrats succeeded -- but only in delaying the measure. After Republican Gov. Rick Perry called three special sessions -- and another walkout by Democrats -- Republicans finally succeeded in approving the GOP-friendly redistricting map.

As for the current fight in Wisconsin, it has as much to do with political perceptions as it does legislative maneuvering, so the winner may ultimately be decided by public opinion.