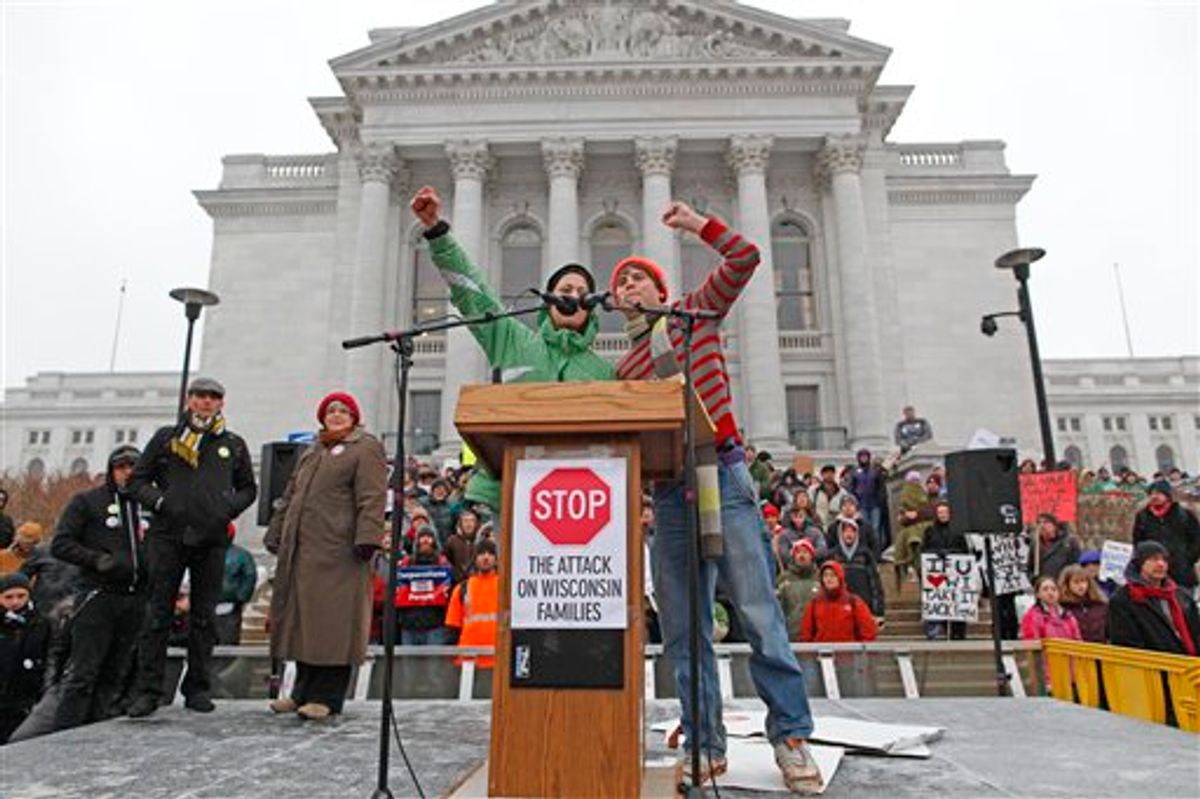 A pair of UW-Madison students fire up the crowd as sleet falls outside the state Capitol Monday, Feb. 21, 2011, in Madison, Wis. Opponents to Governor Scott Walker's bill to eliminate collective bargaining rights for many state workers are taking part in their seventh day of protesting. (AP Photo/Jeffrey Phelps) (AP)
--

No resolution appeared imminent Monday to the stalemate over union rights in Wisconsin, leaving Senate Republicans resigned to forge ahead with less-controversial business such as tax breaks for dairy farmers and commending the Green Bay Packers on winning the Super Bowl.

As the standoff entered its second week, none of the major players offered any signs of backing down in a high-stakes game of political chicken that has riveted the nation and led to ongoing public protests that drew a high of 68,000 people on Saturday. Thousands more braved cold winds and temperatures in the 20s to march again on Monday, waving signs that said "Stop the attack on Wisconsin families" and "solidarity."

The 14 Senate Democrats who skipped town Thursday to indefinitely delay a vote on Republican Gov. Scott Walker's bill stripping most collective bargaining rights from nearly all public employees remained missing in action for a fifth day.

"For those 14 Senate Democrats, you've had your time," he said. "It's time for them to come back and participate in democracy."

The Democrats have been far from in hiding. They've done numerous television interviews and two of them even participated, via telephone from an undisclosed location, in a brief meeting to schedule the Senate's session on Tuesday.

"You have shut down the people's government, and that is not acceptable," Republican Senate Majority Leader Scott Fitzgerald said to them during the meeting.

Both the Senate and Assembly planned to be in session on Tuesday to take up the bill, but at least one of the missing Democrats needed to show up for a vote to be taken in the Senate. Assembly Democrats planned to offer dozens of amendments that could push a vote into Wednesday or later.

Although Tuesday's list of items, including the resolution honoring the Packers, is largely bipartisan, Fitzgerald hinted that he might try to push some more controversial ones later, even if the Democrats aren't back. Among the possibilities is a vote on the question of whether voters should be required to show identification at the polls.

"It's right in front of the governor," Miller said. "He just needs to pick it up and allow us to move on. ... This is a no-brainer."

Walker has repeatedly rejected both offers, saying local governments and school districts can't be hamstrung by the often lengthy collective bargaining process and need to have more flexibility to deal with up to $1 billion in cuts he will propose in his budget next week and into the future.

As he spoke under heavy guard at a late afternoon news conference inside his conference room, thousands of protesters could be heard through the doors blowing whistles, banging on drums and chanting "Scott Walker has got to go!"

The emergency plan Walker wants the Legislature to pass would address this year's $137 million shortfall and start dealing with the $3.6 billion hole expected by mid-2013. The benefits concessions would amount to $30 million this year, but the largest savings Walker proposed comes from refinancing debt to save $165 million.

That portion must be done by Friday for bonds to be refinanced in time to realize the savings by June 30, the end of this fiscal year.

Walker said not passing the bill by Friday would make even deeper cuts necessary and possibly result in laying off 1,500 workers over the next four months.

Thousands of those affected and their supporters marched on the Capitol for a seventh straight day. Hundreds of them have been sleeping in the rotunda every night and several districts have had to close after so many teachers called in sick. The Madison School District was closed Wednesday through Monday but was expected to reopen Tuesday.

Districts in central Wisconsin were also closed Monday, but that was because of 10 to 12 inches of snow. Milwaukee schools were shut down for a pre-scheduled midsemester break. Those closures, on top of Monday being a previously scheduled furlough day for state workers, resulted in another large crowd Monday but an official estimate was not yet released.

At noon, guitarist Tom Morello of Rage Against the Machine took to a stage on the Capitol steps to fire up the crowd. He said he flew in from California to lend his voice to the protest.

"The future of workers' rights will be decided in Madison, Wisconsin," he said. "You're making history here."

He joked that he could hardly play the guitar because his fingers were numb. He sang a song with the refrain, "For the union men and women standing up and standing strong!" Each time he repeated that lyric, the crowd roared.

Walker's plan would allow unions representing most public employees to negotiate only for wage increases, not benefits or working conditions. Any wage increase above the Consumer Price Index would have to be approved in a referendum. Unions would face a vote of membership every year to stay formed, and workers could opt out of paying dues.

The plan would also require many public employees to cut their take home pay by about 8 percent by contributing more of their salaries toward their health insurance and retirement benefits, concessions the unions have said they're willing to accept.

But Walker and Republicans are showing no willingness to budge while the Senate Democrats say they are prepared to stay away for weeks if that's what it will take.