Battle of the bulging burrito: Chipotle vs. Qdoba

With Taco Bell struggling with its image, these chains have taken the "real food" market. Which tastes better? 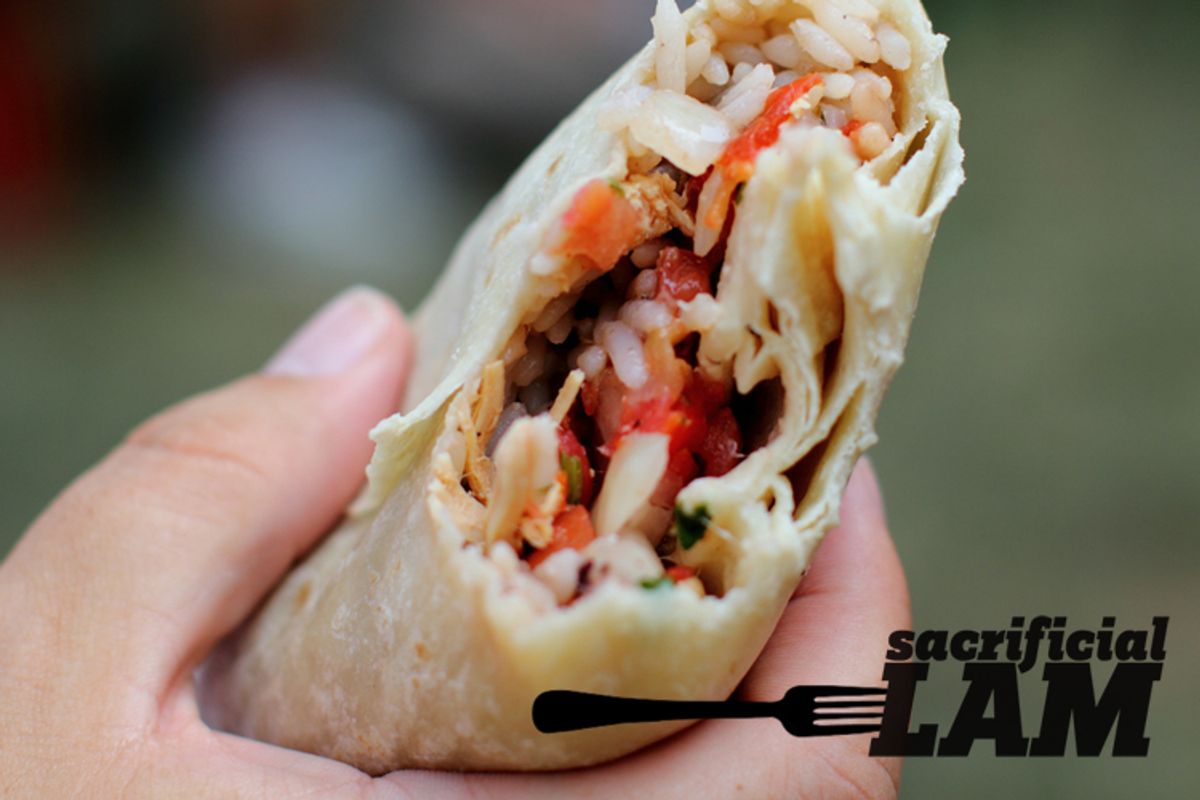 There have been several periods of my life when I'm pretty sure my body mass was roughly 45–49 percent taco. (Remember that the majority of your body is always water.) The first of these was when I was 17, when having both a driver's license and a Taco Bell within five miles of my home turned into a volatile combination of liquid cheese and orange grease. In those days, I counted MexiMelts among my friends, and in my memories I can still taste, happily, the 1993 limited-time-only Monterey Jack Chicken Soft Taco, a treat so obscure there is literally one reference to it in all of the Internets.

At some point, though, I came to discover what we might call Actual Mexican Food and I turned away from Taco Bell. (Sorry, the heart is fickle.) It's not like they needed me; Taco Bell sales went from $2.5 billion per year in 1990 to more than $6 billion in 2007, on the backs of burritos you pay for in change. But any thoughts I might have had for even a nostalgic return to the Toxic Hell were shelved last month when they were served with a lawsuit challenging them to stop calling their taco filling "meat," based on the long list of test-tubey ingredients that go in their filling. (The Bell responded with a swaggeringly confident ad campaign "thanking" the plaintiffs for suing them, but look: It's never be a good thing when you're in the position of having to convince people your beef is made from cows.)

Meanwhile, the two biggest "grown-up" Mexican chains, Chipotle and Qdoba, are laughing all the way to el banco. Chipotle has one of the highest-valued stocks in the industry, and Qdoba's grown 15 percent over two years, both blowing up selling themselves as makers of real food. Chipotle made huge waves a decade ago when it started buying its meat from Niman Ranch, one of the country's biggest names in "humane" and "sustainable" meat. And Qdoba's website blares the chain's "passion for ingredients," which is the kind of thing you hear pouring out of the mouths of restaurant chefs whenever they're within 10 feet of a reporter.

But how do they taste? I set my stomach out on a burrito death match between the two. (No, burritos, and chain burritos, specifically, aren't really "Mexican" food, but, as a commenter on Chowhound sagely said, "Let's not criticize bronze for not being gold.")

Carrying this thing away from the counter like a small baby, I suddenly realize that it's been a long, long time since I ate a burrito, being much more of a taco man myself. So my technique was awkward. I took the thing out of the foil, which was my first mistake. I held it up almost horizontally, not wanting it to flop over, but still tried to bite from the end, so that it looked like I was gnawing on a football sideways. People were looking, whispering, "What the hell is wrong with him?" I glanced down at my napkin, and saw ... instructions. Diagrams on how to hold the thing and unwrap the foil little by little. I have become the person for whom fast food chains print instructions on their napkins. God, I am a loser.

I wanted to taste each item in the tortilla separately, to get a sense of its quality, but two bites in, I have to admit that I had no idea what was in my mouth anymore. The corn was sweet, the juice -- from the meat? From the salsas? The beans? Who knows! -- was deeply savory, nicely balanced with tartness, and every once in a while, I could taste some cilantro.

By the time I got the thing down to the size of, oh, say, a softball, though, I could taste and discern. The pork was reasonably tender, with the satisfying chew of braised meat, and while it was aggressively salty, it seemed OK in the context of the rice and everything else. But it was the pinto beans that were the clear star here, packing the kind of rich, deep flavor that ties together and grounds everything else, rounding all the sharp edges out. I was kind of astonished, to be honest, at how much I liked these beans -- how they made the salsa seem brighter, the corn seem sweeter, the meat, well, at the very least, seem less salty. (I later came back and tried a steak burrito with black beans. I didn't like those beans nearly as much, though the steak had that minerally tang you want from good beef, which is something I have never actually tasted before in chain food.)

Eating the burrito was an activity of intense focus. It was so goddamned big, so ready to overflow, that it was like a game -- each bite had to be quick, well before you finished chewing, and strategically placed so things wouldn't fall apart and the center can hold. It's an ordeal, but a pleasurable ordeal, like doing that extra set of reps at the gym. (No, I don't really know what that feels like anymore.)

Considering that I know the biggest fan of Qdoba in this hemisphere (seriously, he eats there six nights a week), I didn't walk into the restaurant with great expectations, because all my friend talks about is how clean their bathrooms are. And when I saw the sign for "Mexican Gumbo" in the window, I was fearing an outright abomination.

But upon entry to the burrito line, I was struck by two things. The first was the music! I don't know who the band was, but it's like Bikini Kill for kids who have never heard of Bikini Kill, a just-cleaned-up-enough-for-a-restaurant version of riot grrl. Given that I'm standing in a fast food line, it sounds pretty awesome. The other thing was that there was a cook, at a stove, with a pan, with food in it! And he was seasoning it in professional style, raining the salt down from on high. It might be all so much culinary theater, but it's really remarkable how much that sight makes me think the food I'm about to eat is, at the very least, some kind of serious.

I took my elephant-trunk-size burrito to a table, feeling good about things. This time, I was prepared. This time, I had the unwrap-the-foil technique down. This time, I knew how to hold and approach the burrito. (In other news, I know how to tie my own shoes, Ma!)

I took a big, enthusiastic bite of the burrito and it tasted ... wet. It wasn't flavorless, but it was watery; the juices seemed to run a little thin. The beans weren't nearly as rich and creamy-tasting as Chipotle's. They didn't have the power to bind the other flavors together. The pork was fine, not particularly tasty, but it brought the gravity of meat.

Fully halfway into the burrito, now that I'd gotten to the sour cream and cheese portion of this lunch-log, I could say that Qdoba's flavor tendency runs acidic. With this lean-ish meat and those thin beans, there isn't really very much fatty, rich flavor to temper the tart salsa. (Of course, I'm not saying there aren't a lot of fat grams; I'm sure there are plenty of those.) This isn't a bad thing, necessarily; it just depends on what your tastes are.

But there are other overall markers of quality I felt a little underwhelmed by. The corn's flavor goes totally missing once you start eating. And while I admit, given my past, that I like the squishy chewiness of sleazy mass-produced wheat tortillas, Qdoba's eventually came to unsettle me. It had a slight hint of plastic in its flavor, but more dishearteningly, it didn't give much back in the way of chew, its surface sticky, dissolving into a white-bread kind of gumminess. The music was still rocking out, though.

It's funny. A few weeks ago, I tweeted that I was considering going to Chipotle for the first time, and dozens of people tweeted back to me. I got my share of "Just say no!" notes, but almost every professional cook and food writer who responded said something along the lines of, "Hey, it's pretty good!" So here you go. Chipotle: Hey, it's pretty good! In fact, I think I'm headed there again right now.