The right responds to Obama decision on DOMA

Decision met with cries of sabotage! But how radical is a radical who totally hides his radicalism? 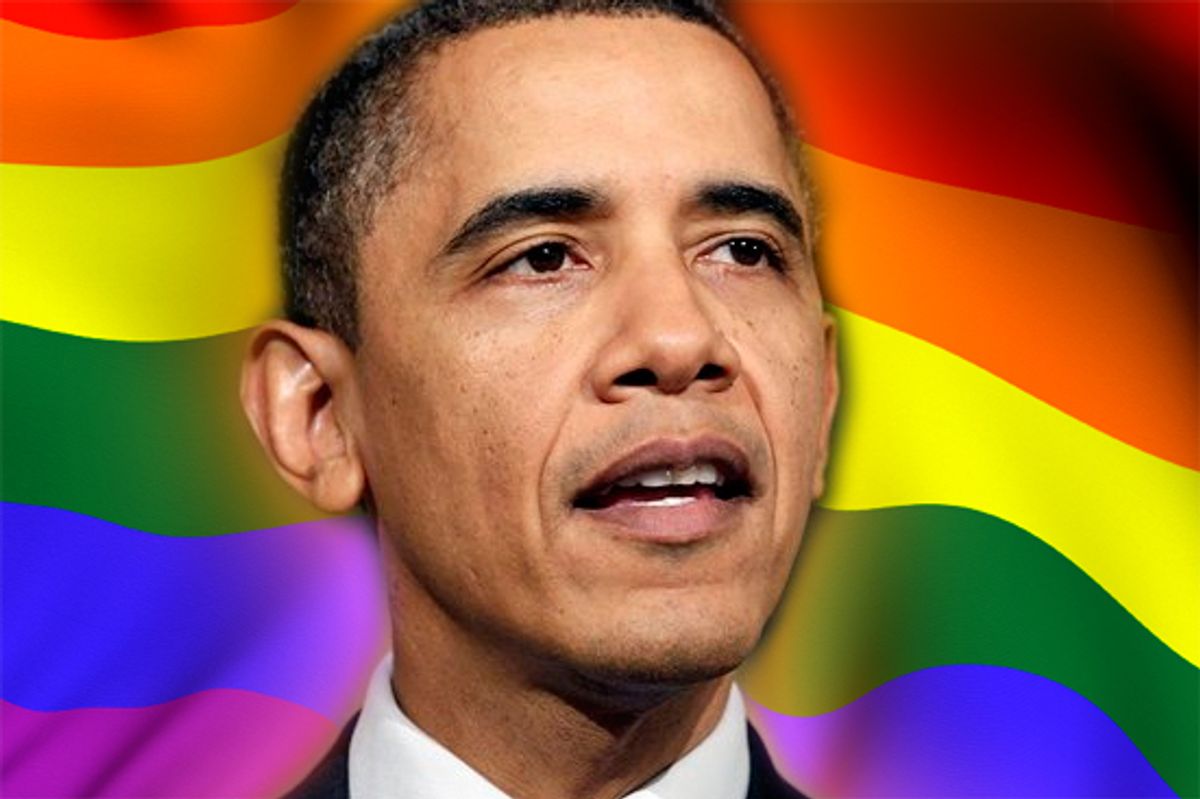 As of 3:30 p.m. EST, there were seven separate posts on National Review Online's The Corner about the Justice Department's decision to stop defending the Defense of Marriage Act. (For reference, the name "Koch" does not appear once on the blog's front page.) They are ... not thrilled, for the most part.

Daniel Foster posted first, with commentary-free link to the news itself and the full text of the Justice Department's letter to Congress.

"Marriage Law Foundation" director William C. Duncan was the first to weigh in with an opinion. He seems unhappy. "There is something about the marriage issue that provokes an 'any means necessary' approach from its proponents," he writes, which may be because its proponents consider it a fundamental civil rights issue.

He adds more "initial reactions," including: "The DOJ (and the president) are attempting to unilaterally amend the Constitution to add a sexual-orientation discrimination clause."

Next up is the delightful Maggie Gallagher, professional opponent of gay rights:

We’re seeing a pattern to how Democrats respond to election losses: do an end-run around democracy. You can’t block a union bill? Flee the chambers. You can’t repeal DOMA? Declare orientation a protected class all on your own. This tactic may backfire, however: It opens up the pathway for the House to intervene to defend the law.

Stanley Kurtz has his own theory: "This is a political move designed to distract attention from debates on public-sector unions and the budget that are not going the president’s way." (Last I checked, most Americans were on the president's side in the union "debate.") The good news, though, is that this decision means the president will soon drop his "centrist persona" and reveal himself to all as a dedicated leftist "Radical-in-Chief":

Did anyone on any part of the political spectrum ever actually believe that Obama opposed gay marriage? That was never anything but disguise. This new move suggests that the centrist mask is slipping, the country is polarizing, and Obama is being forced to fly his true flag. I don't doubt that the president will continue to resist full disclosure of his leftist political allegiances. Yet that is the direction in which he is now being pulled.

This raises some interesting questions about the construction of identity -- how radical is a radical who hides his radicalism so well that he never does anything radical? -- but I am looking forward to when the president can finally let the mask slip and embrace polyamorous collectivism, or what-have-you.

Shannen Coffin, former Bush administration deputy assistant attorney general and general counsel to gay marriage supporter Dick Cheney, does not believe that Obama can possibly be personally "grappling" with the issue of gay marriage, because his Justice Department's "constitutional analysis is really policy dressing itself up as law." Plus they never even tried that hard to defend opposite marriage. They didn't even use the best and most convincing arguments!

For instance, as Attorney General Holder’s letter admits, the department had already deemed legally undignifiable the argument that heterosexual marriage serves a procreative function necessary for an ordered society, so the AG and the White House instructed Civil Division lawyers simply not to advance that highly credible argument because, in the view of political appointees, more modern social science did not bear it out.

Right. OK, well, the "procreative function" of marriage certainly is a really good argument for banning gay marriage, until you ask if that means that the government should also ban marriage between old people and the infertile.

Ramesh Ponnuru says the president is a lying liar:

Stanley Kurtz writes, “Did anyone on any part of the political spectrum ever actually believe that Obama opposed gay marriage?” My guess is that the answer is yes, millions of people heard him and assumed he was telling the truth. That is, after all, why he said what he did.

This would be a good gotcha if the president had actually announced that he now personally supports gay marriage. It would be an even better gotcha if Obama hadn't campaigned on repealing DOMA.

Andrew McCarthy takes a break from insinuating that they're all in cahoots with radical violent extremists to praise the DOJ for "openly [advocating] for the outcome desired by Obama’s base" instead of "sabotaging" legislation by purposefully "steer[ing] the case toward the radical outcome the Obama base desires...."

Where all of us saw the Obama administration defending an odious law he promised to repeal, conservative legal activists saw sabotage and skulduggery! If you had just used our foolproof legal arguments about the grossness of gays, they all seem to be saying, no judge in the country would let a homo so much as buy his boyfriend a promise ring. Now, though ... Cats and dogs, living together, because Eric Holder refused to repeat their hand-scrawled talking points about how things worked on the Ark.