How David Koch tried to derail the Reagan revolution 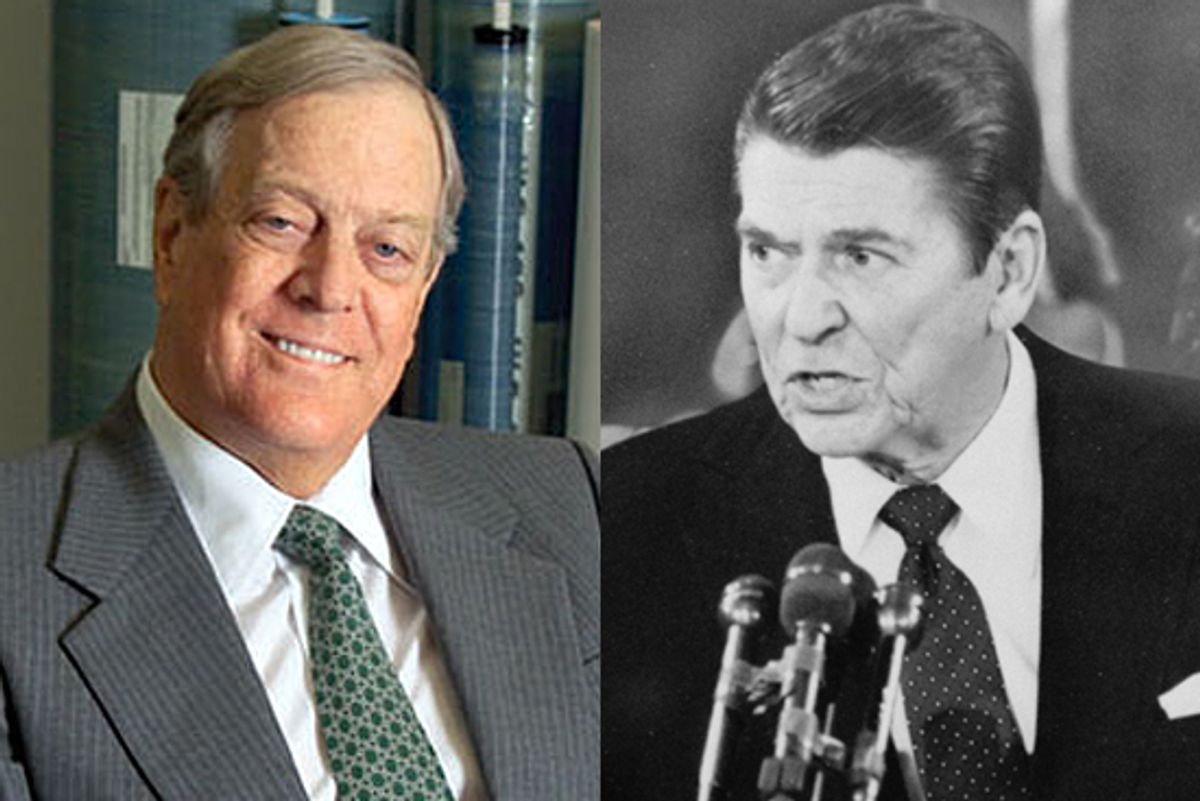 Toward the end of what seems to be (but maybe isn't!) a secretly recorded phone conversation with a blogger pretending to be David Koch, Wisconsin Governor Scott Walker talks of gathering his Cabinet several weeks ago, pulling out a picture of Ronald Reagan, and likening the push to deny public sector workers collective bargaining rights to the Gipper's 1981 decision to fire striking air traffic controllers.

It was, the governor says, "one of the defining moments of his political career, not just his presidency."

Sure, Walker (probably) had no idea he was talking to an impersonator, but the simple fact that someone claiming to be David Koch could (apparently) reach him with such ease speaks to the stature Koch -- a billionaire tycoon who has been called "the Tea Party's wallet" -- now enjoys on the right. And to conservatives like Walker, Reagan is now regarded with god-like reverence. What Walker may not remember, though, is that the same David Koch he thought he was speaking with actually tried to derail the Reagan Revolution.

In the late 1970s, the political climate wasn't much different from today. A Democrat sat in the White House, the economy was struggling, and conservatives were seething -- furious not just with Jimmy Carter's policies, but with the lack of ideological purity on the Republican side. Anti-government sentiment was surging, with tax revolts afoot in California and Massachusetts, and "impure" Republicans like Clifford Case, Ed Brooke and Jacob Javits were facing serious headaches in GOP Senate primaries. It was in this climate that Ed Clark, a corporate lawyer from Los Angeles, ran for governor of California in 1978 as a libertarian (technically, he was listed as an independent on the ballot, since the Libertarian Party, which had been established just six years earlier, was not officially recognized at the time). In the same election in which Californians endorsed the anti-tax Proposition 13, Clark received 5.5. percent of the vote -- a jarringly high tally for the an unknown, underfunded minor party candidate.

On the strength of that showing, Clark became the Libertarian Party's nominee for president at the party's September 1979 national convention in Los Angeles. To fill out his ticket, Clark turned to an heir to a massive oil fortune and the president of a New York-based chemical company: 39-year-old David Koch. The pairing was a smart one for the Libertarians: As a candidate himself, Koch could sink his personal fortune into the Clark-Koch effort. With his money, the party would be able to afford a 50-state ballot drive, television ads, and a full-fledged national organization.

Hopes were high. In their inaugural national effort, the Libertarians had attracted fewer than 5,000 votes nationally in the 1972 presidential election (though a faithless elector defected from Richard Nixon and voted for Libertarian John Hospers). In 1976, they'd jumped to nearly 175,000. But now they had serious money to reach the millions of angry, anti-government voters who were growing louder everyday. This energy helped the party field 550 candidates for office across the country. It was only the beginning, Clark and Koch promised.Their goal for the '80 campaign was to break ten percent in the presidential race, a feat that would give the party momentum and automatic ballot status in most states. By 1982, Libertarian candidates for Congress would begin winning elections, and by the end of the decade, the Libertarians would eclipse the GOP as the nation's second major political party.

The Libertarians' massive '80 push was no small concern to the Republican Party and its candidate, Ronald Reagan.  The general election was supposed to be close. It was still assumed that Carter, the peanut farmer from Georgia, would sweep the South, making it critical for Reagan to win elsewhere. But by the summer and early fall, Clark began moving into double-digits in polls in some Western states; in Alaska, his support reached over 20 percent. Pundits had long assumed that the race's other third party candidate, John Anderson, might play the spoiler role. But now Anderson's numbers were fading, and while Reagan was scrambling to moderate his own image for the masses, Clark was winning new fans on the right. It seemed entirely possible that the the upstart Libertarian nominee would deny Reagan just enough votes in just enough key states to prevent him from unseating Carter.

Of course, that's not how it worked out. In the race's closing weeks, support for Clark and Anderson -- and, for that matter, for Barry Commoner, the other other third party candidate -- cratered and Reagan rolled to a 44-state landslide. Anderson finished with 5,7 percent of the vote, while the Clark-Koch ticket tallied 1.1 percent, or just over 900,000 votes. It wasn't quite the breakthrough showing they'd envisioned, but it still stands as the best performance -- by far -- for a Libertarian national ticket. (Running in an election that attracted nearly 40 million more total voters, for instance, Libertarian Bob Barr attracted just 523,000 votes in 2008.) After '80, the Libertarians fell victim to infighting. No members of Congress were ever elected on the Libertarian line and the party ended the '80s nowhere near Clark's goal of major party status. For Libertarians, the Clark-Koch campaign still represents the glory days.

And if those glory days had gone just a little better for them, there would have been no President Reagan to fire the air traffic controllers in 1981 -- and to inspire Scott Walker all these years later.