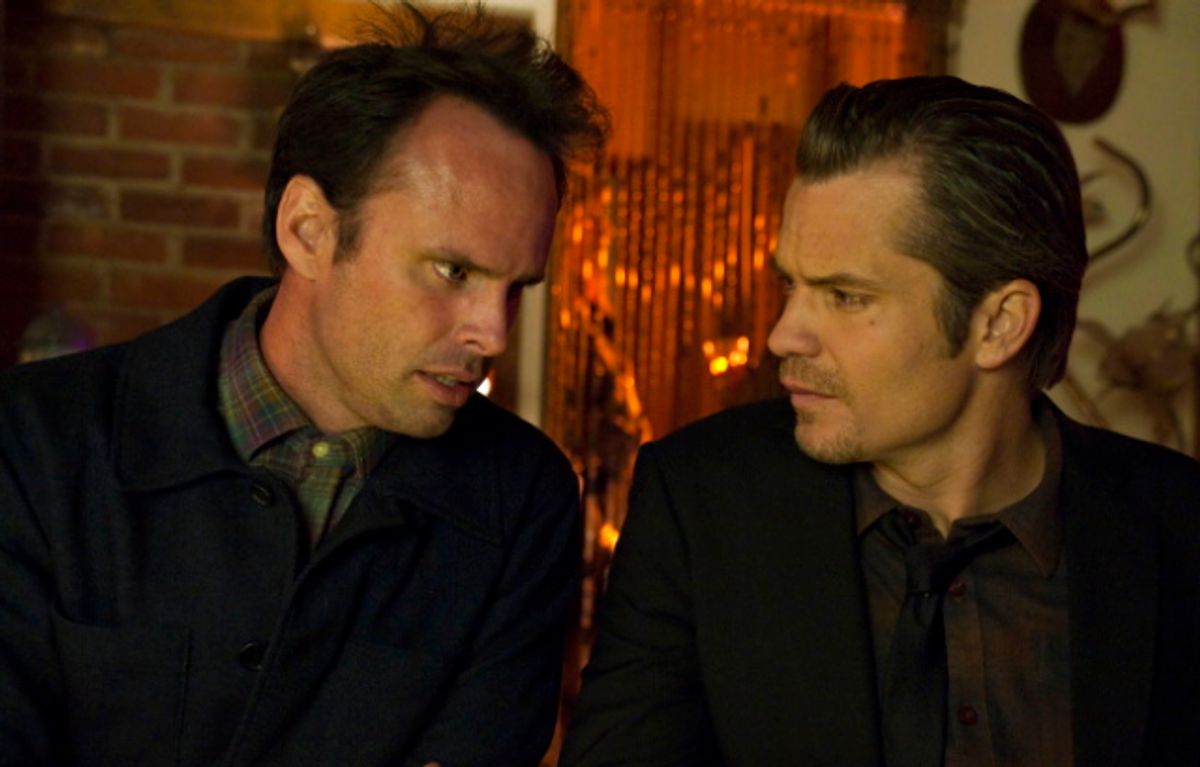 "Justified" (Wednesdays, 1o pm/9 central) has become such an addictive and original show that its limitations don't bother me anymore. Before season one debuted, FX plastered the nation with images of the series' star, Timothy Olyphant, who's best known for playing hot-tempered lawman Seth Bullock on "Deadwood." The sight of Olyphant in a ten-gallon hat sparked hopes (not just in me) that this show might be a modern-day cousin of that late, lamented series. But from the pilot episode -- which kicked off with Olyphant's character, U.S. Marshal Raylan Givens, baiting a Miami drug lord into drawing on him in a restaurant, then killing the man and getting transferred to rural Kentucky -- it seemed as though "Justified" wasn't interested in being much more than smart dumb fun: "Walker: Texas Ranger" with the laid-back attitude of "The Rockford Files." The first half of season one was smartly directed and acted, but aside from some eccentric characters and dialogue (in the spirit of Elmore Leonard, who executive produces"Justified" and supplies the producers with early drafts of his short stories about recurring character Raylan Givens, but does not contribute directly), it felt like one of those mid-80s cops shows that critics labeled "smart" because they weren't completely stupid. The beats on "Justified" grew so familiar so quickly (oddball bad guys cause trouble; Raylan investigates and ends up killing them all, pausing along the way to piss off an authority figure or bed a comely witness) that I didn't see much reason to check in every week.

Then something happened. I'm still not sure quite what, but it improved "Justified" tremendously, and I'm pretty sure it occurred somewhere between "Blowback," the episode with "Deadwood" regular W. Earl Brown as an escaped inmate taking hostages in the U.S. Marshal's office, and "Hatless," which saw Raylan lose his hat in a stupid bar fight and spend the rest of the episode trying to prevent his ex-wife's doofus husband from getting killed over a real estate debt. Both these episodes forced Raylan to try to resolve situations without violence, not for pacificist reasons (Raylan has an Old Testament mindset, hence the series' title) but practical ones. His hot temper and itchy trigger finger were ruining his life.

In "Blowback," Raylan came on like an even-tempered hostage negotiator because he was being investigated for prior shootings and wanted to prove to the investigator (who was in the office looking over his shoulder) that he didn't need bullets to solve problems. His solution to the crisis was Elmore Leonard-level brilliant: After hearing the inmate talk about how much he loved spicy fried chicken, he had a colleague pick some up, then offered a piece to the felon along with a shot of booze. (The man surrendered quietly.) The following episode, "Blowback," didn't end peacefully -- in fact it climaxed with a Quentin Tarantino-style close-quarters standoff that felt irritatingly preordained -- but it put Raylan in a vulnerable position, temporarily stripped of his legal authority and forced to be a calmer, more verbally centered character, more of a private detective-type. From here on out, Raylan seemed more inclined to talk his way out of jams just to see if he could. He tried in earlier episodes, too, but because he'd been built up as a Clint Eastwood-style cranky badass, his heart didn't seem to be in it. Raylan seems intellectually engaged now, as if he has decided that talk is another kind of action and wants to see how far he can push himself.

During and after these two episodes, Olyphant brought his energy level down, to great effect. Raylan still seems smart and alert. But he's not as much of a walking hard-on. He's more likely to be amused by characters that once might have made him want to reach for his gun. He's also a bit more courtly, taking obvious pleasure in the sound of honorifics such as "ma'am" and "sir," and seeming privately amused when directing them toward drug dealers and killers. Early on, Raylan seemed destined to go out early the hard way, shot dead or beaten to death. Watching him now, you can picture him turning into Robert Duvall's old cop in "Falling Down" -- a dinosaur who decided to adapt, and to have fun adapting. The post-"Hatless" Raylan is more rueful and reactive -- far removed from the character we saw in the first half of the season, a snarly 21st century gunslinger -- and it's surely no coincidence that he's gone hatless more often.

I wouldn't mind if they lost the hat entirely. The hat is a symbol not just of Raylan's constructed and constraining persona, but of the show's limiting preconcieved notions of itself. (And early on it seemed too much a prop; Raylan said he'd owned it for years, but it looked like he'd just bought it.) If you go back and compare the "Justified" pilot and first few episodes from the end of season one and the start of season two, you can you see how the series evolved from a somewhat corny concept into a strong original series -- not just watchable but fresh and funny, with a distinctive temperament and energy.  Its strength lies in its enthusiastic embrace of its setting and characters, which do Elmore Leonard proud without slavishly aping him.

Raylan is the Leonard hero par excellence --  quieter, hipper and more manly than most of his contemporaries, but not obnoxiously so.  Although he was burdened with an uncharacteristic explosive temper (Leonard heroes rarely have anger management issues) he's become more Leonard-esque by the week, to the point where he reminds me of the soft-spoken Vincent Mora in Leonard's "Glitz."  Raylan's love interests are almost (but not quite) Leonard-worthy: Ava Crowder (Joelle Carter) started out a redneck femme fatale (shooting her abusive husband, Bowman Crowder, then briefly taking up with Raylan), but has turned into a hardbitten survivor with a stand-by-your-man streak (and what a troubling man she's chosen). Winona Hawkins (Natalie Zea) has a quiet strength and a no-nonsense demeanor that makes her more than Raylan's ex-wife-turned-bedmate -- and I'm moved by her struggle to disentangle herself from her second husband Gary (William Ragsdale), who has big dreams but is too hapless and impulsive to realize them. The show's oddball supporting players are terrific; I'm especially fond of David Eigenberg as a Brooklyn hustler who somehow got marooned in Kentucky, Alan Ruck as a former white supremacist turned outlaw dentist, and Jere Berns as Wynn Duffy, the sadistic enforcer in "Hatless" who's less interested in collecting debts than terrorizing debtors. And I like Raylan's colleagues, notably the super-poised Rachel Brooks (Erica Tazel, a steely beauty who should be given more to do) and Raylan's sarcastic boss Art Mullen (Nick Searcy, who's turning into one of those Jack Warden/Charles Durning-type character actors that you're always glad to see).

Even better are "Justified"'s recurring villains and antiheroes: the great Raymond J. Barry as Raylan's terminally untrustworthy dad, Arlo, and Linda Gehringer as Raylan's stepmom, Helen, who adores Arlo even when he's scheming them both into the poorhouse; M.C. Gainey as Bo Crowder, the glowering, mustachioed, redneck gangster patriarch who turned Raylan's life upside-down near the end of season one; and season two's chief baddies, the Ma Barker-like Mags Bennett (Margo Martindale), who serves home-brewed "apple pie" moonshine to her guests, and her son Dickie (Jeremy Davies), who's clearly fed up with his mom's condescension and 20th century business notions. (There's no good reason why the naturalistic Martindale and the jumpy, buggy Davies should be credible as mother and son, yet their pairing works well; maybe it's because "Justified" treats them as representatives of different centuries and mindsets.)

Best in Show goes to Walton Goggins' Boyd Crowder. Boyd's introduction was unpromising, to say the least. The first episode set him up as the hero's long-term nemesis -- Al Capone to Raylan's Eliot Ness -- and observed him taking part in a crime spree that included the execution of a fellow white supremacist on a highway bridge and the spectacular destruction of a black church with a rocket launcher. (I know action shows take liberties with plausibility, but this level of public mayhem was "A-Team"-level silly.) Then the series took Boyd violently out of the picture at the end of the pilot -- a three-way confrontation between Raylan, Boyd and Ava that ended with Raylan shooting Boyd in the heart.

In the original pilot script, Boyd died right there -- but the producers decided to keep him alive, perhaps because Goggins had acquired a cult following thanks to his scurvy star turn on FX's "The Shield." It turned out to be a great decision; Boyd is far and away the show's most exciting and surprising character. He survived the shooting and proclaimed himself reborn as a good man who abhorred violence and preached the gospel of Jesus Christ. At first Raylan treated this as a ruse; he'd known the shifty Boyd since childhood and figured his conversion was part of a scam. Then Boyd turned into a local cult figure leading other ex-felons on vigilante crusades against local meth dealers (Raylan half-jokingly likened him to Batman). And he apologized to Ava for not empathizing with her abuse at his late brother's hands, successfully courted and won her, and allied himself with Raylan in a battle against both their fathers. Raylan grudgingly accepted that Boyd's conversion was real, or could become real -- and for a while it was real. The high point of Goggins' amazing performance was the scene where Boyd guest-preached in a local church, holding the Good Book aloft and sing-songing his way through a call-and-response-laden testimonial. The actor didn't just imitate the cadences and body language of born again, seized-by-The-Word preachers; he truly seemed to feel them. (You could see his feet doing a crazy-legged, come-to-Jesus shuffle dance.)

After Boyd's dad murdered his followers last season, Boyd returned to his job in a coal mine and has shown signs of reverting to his hateful and violent past. But between the attentive writing and Goggins' big but not excessively showy performance, we never get the sense that the series had Boyd fall off the born-again wagon just to keep the action quotient high. This isn't comic book nonsense; we're watching a man fight to save his own soul. Looking into Goggins' placid yet eerily intense face, I don't feel I'm watching a ridiculous TV character (even though Boyd is ridiculous), but a fully fleshed-out human being who's just starting to figure himself out. He's a truly original creation. If "Justified" itself can be more like Boyd -- if it can scrutinize itself and make bold changes for good reasons -- it could be a truly great show.