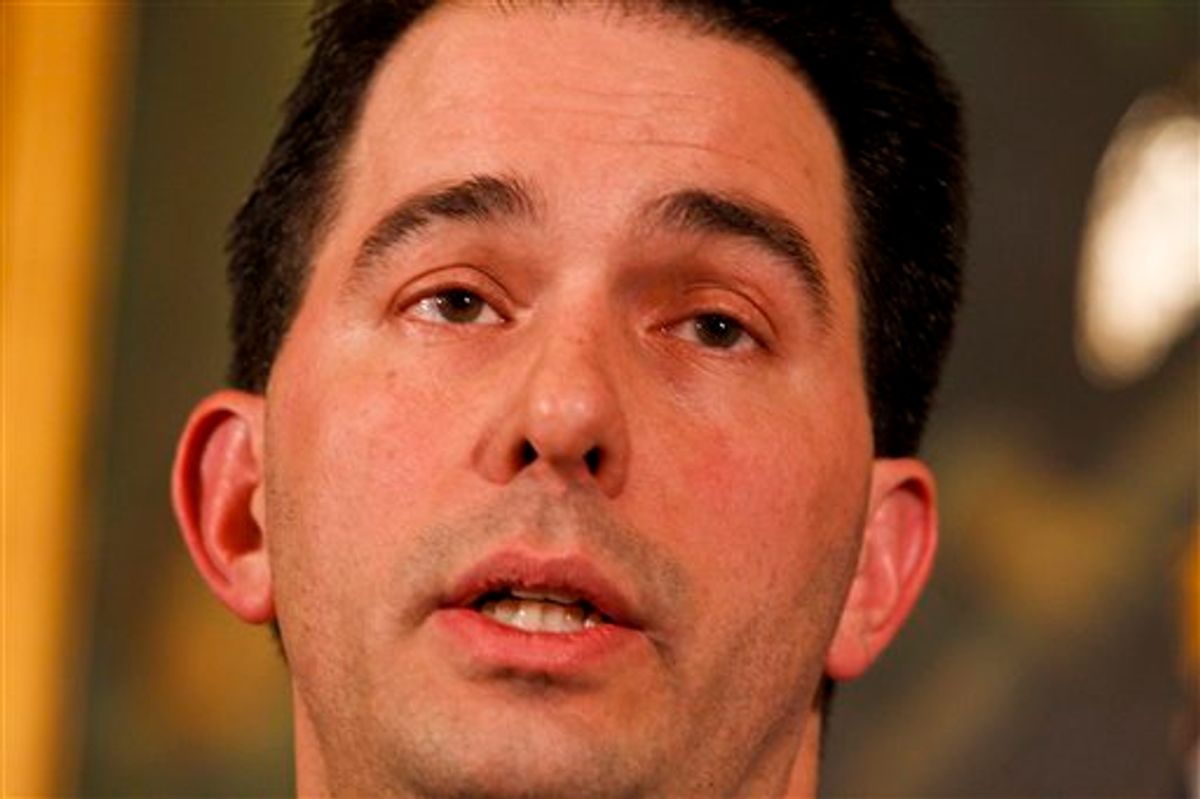 Wisconsin Gov. Scott Walker talks to the media at the state Capitol in Madison, Wis., Monday, Feb. 21, 2011. Opponents to the governor's bill to eliminate collective bargaining rights for many state workers are in the 7th day of protests at the Capitol. (AP Photo/Andy Manis) (AP)
--

Ian Murphy, editor of the Buffalo Beast, just did something wonderful. Murphy, pretending to be billionaire industrialist and secretive conservative political activist David Koch, called Wisconsin Gov. Scott Walker, currently in the midst of attempting to crush the public employees' unions. "Koch" got through to Walker (who hasn't been taking calls from the Democratic state Senate minority leader). He taped the call and put it online.

So Walker will happily take a call from a Koch brother. He says that he considered "planting some troublemakers" among the protesters. He is convinced that everyone is on his side. Like most people who only watch Fox, he has a skewed impression of the popularity of his union-crushing proposals. (His plan is, nationally, roundly unpopular. Except on Fox.)

When "Koch" calls Mika Brzezinski "a real piece of ass," Walker does not respond by saying something awful, which is a bit of a disappointment.

Walker does reveal that he is planning to trick the Democrats into coming back into town for a "talk," despite his lack of interest in compromising anything. He will ask them to open a session in the Assembly, and then take a recess for this talk. At that point, the Senate Republicans would hold the vote on the bill while Walker distracts the Democrats with this entirely pointless discussion:

They can recess it ... the reason for that, we're verifying it this afternoon, legally, we believe, once they've gone into session, they don't physically have to be there. If they're actually in session for that day, and they take a recess, the 19 Senate Republicans could then go into action and they’d have quorum because it's turned out that way. So we're double checking that. If you heard I was going to talk to them that's the only reason why. We'd only do it if they came back to the capitol with all 14 of them. My sense is, hell. I'll talk. If they want to yell at me for an hour, I'm used to that. I can deal with that. But I'm not negotiating.

Walker also thinks that Reagan crushing the air-traffic controllers' union was "the first crack in the Berlin wall," because he's been stewing in the propaganda of conservative mythology for years.

Koch: [Laughs] Well, I tell you what, Scott: once you crush these bastards I’ll fly you out to Cali and really show you a good time.

Walker: All right, that would be outstanding.

So! A Koch brother can call up a nationally prominent Republican elected official and get an audience whenever he likes, basically. That is not particularly surprising, I guess.