Rescue efforts continue more than a day after NZ quake 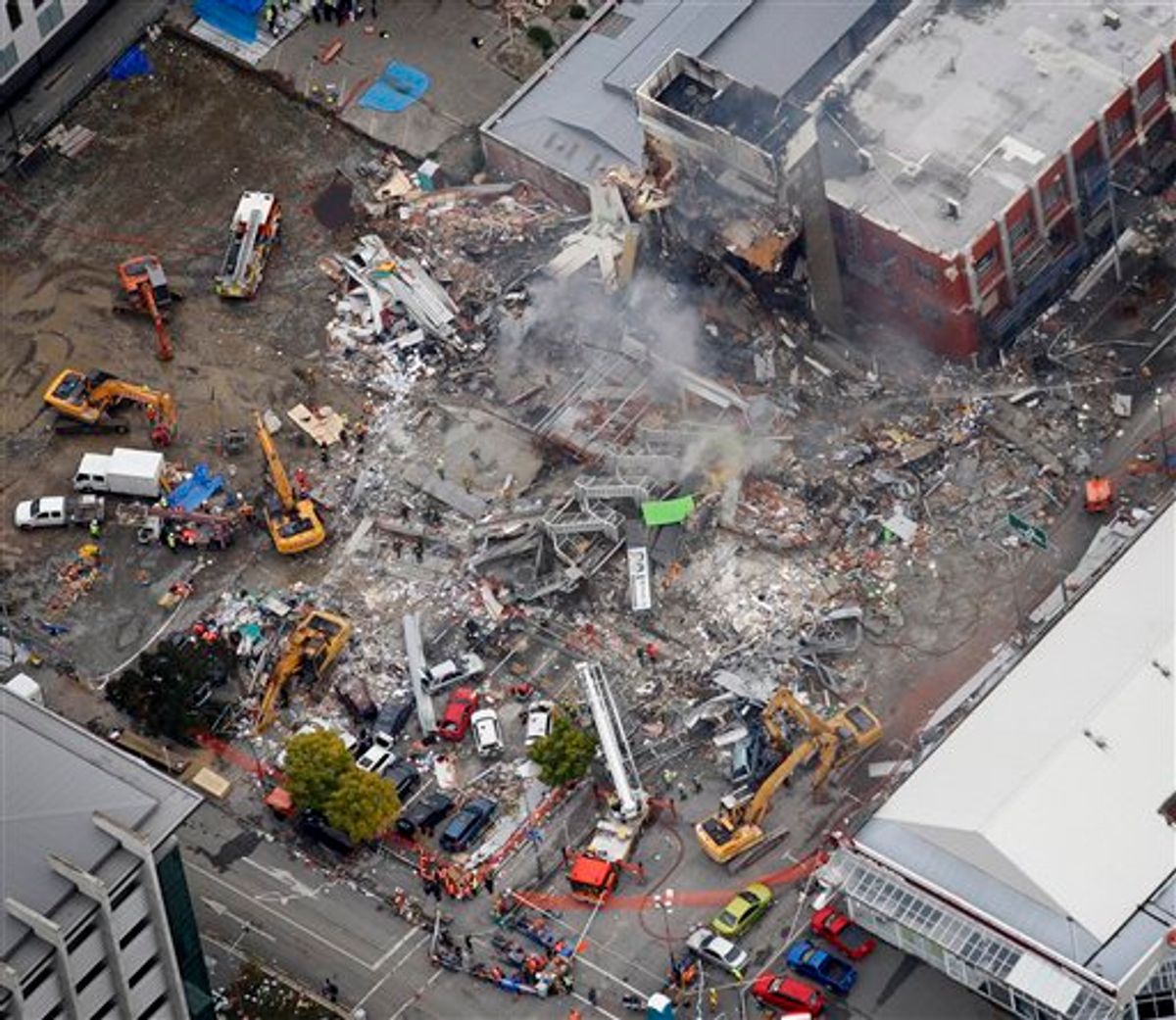 Students from across Asia are feared among the dead in an office building that collapsed in New Zealand's earthquake, with police saying Wednesday that they were "100 percent certain" no one trapped in the rubble was alive.

Survivors of the collapse at the Canterbury Television building described a scene "like out of a horror movie" and said they were worried about dozens of friends and colleagues whose fate was still unclear.

"As we were eating lunch, there was a major shaking, and suddenly the floor fell," 19-year-old Kento Okuda told Japan's Asahi Shimbun newspaper. Okuda was studying at King's Education language school inside the building along with more than a dozen other Japanese.

"Everyone around me was saying things like 'It hurts' as they fell downward," he said. "And then I realized I was in total darkness, with my right leg pinned by something so I couldn't move."

Rescuers had to cut off his leg to free him.

By Wednesday afternoon, authorities had called off rescue operations at the building, where an unknown number of people were working or studying when the quake struck 24 hours earlier.

"We don't believe this site is now survivable," police operations commander Inspector Dave Lawry told reporters, adding that the part of the building that remains standing was in danger of collapse, weakened by quake aftershocks and fire.

A number of overseas students who were in the building when it toppled had not been located, he said, adding that he could not give an exact number.

"The sad fact is we're removing resources form this site to other sites where there is a higher chance of survivability," Lawry said.

"My heart goes out to those families ... knowing that some of their children have probably been killed in this incident."

Those trapped were thought to include as many as a dozen Japanese students attending a language school on the premises and 15 employees of a TV station. Also missing were students from Thailand, China and South Korea.

Families of the missing waited anxiously for any news that their relatives escaped the avalanche of concrete and debris unleashed by the magnitude 6.3 quake.

"We don't know whether Noriko was eating lunch inside the school, or whether she went out. If she went out, she may have survived," Shu Otsubo, whose daughter was taking classes at King's Education and hasn't been heard from since the earthquake hit, told Japanese broadcaster NHK.

Some of those trapped in the building -- including a Japanese teacher and Chinese nurse -- were able to use their mobile phones to contact their families. It wasn't clear if all of those who made contact with the outside world were among the more than 20 people police said had been pulled from the building.

Particularly hard hit were a group of Japanese from the Toyama College of Foreign Languages who were eating lunch at the language school when the quake hit. Thirteen of them were eventually rescued, but another 10 remained missing, according to officials at Japan's Toyama city emergency room, which was monitoring the situation.

Some of those rescued had broken bones and serious injuries, officials at the emergency center said.

Also missing were a number of nurses taking courses at the school, including six from Thailand, two from Japan and one from China, officials and media reports from those countries said. A South Korean brother and sister who studied there were also unaccounted for, the country's foreign ministry said.

"There are three situations: They are dead, they have been injured and rescued but yet to be identified by the New Zealand authorities or they are still under the building," Thai Ambassador Noppadon Theppitak said of the missing nurses.

The students at the school ranged in age from their late teens to their 60s. It wasn't possible to confirm whether all of those unaccounted for were in the building at the time of the quake.

The building was also home to its namesake television station, Canterbury TV. Company chairman Nick Smith said "probably 15" of his staff were missing.

He said those who managed to escape described a scene that was "like out of a horror movie" and broke down when recounting their ordeal.

"(They've) lost a lot of friends, a lot of colleagues, a lot of talent and a lot of lifelong relationships," Smith said.

Associated Press writers Mari Yamaguchi and Tomoko A. Hosaka in Tokyo, Hyung-jin Kim in Seoul, South Korea, and Thanyarat Doksone in Bangkok contributed to this report.