CIA man in Pakistan may not have immunity 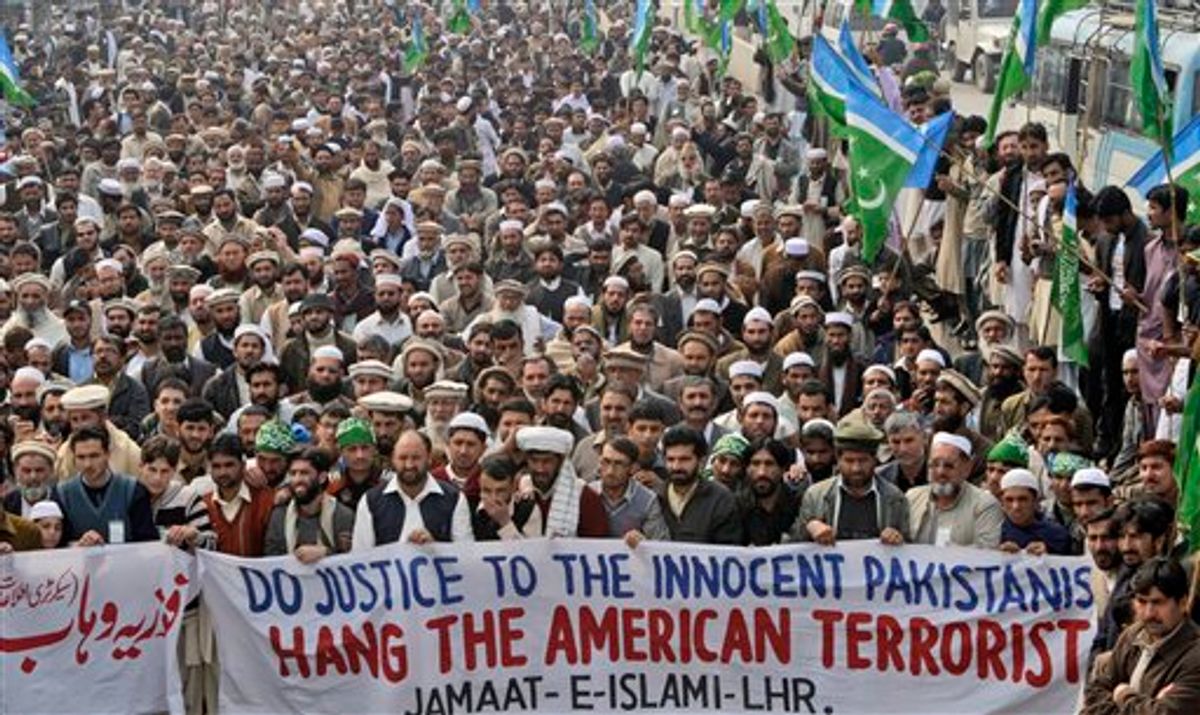 Supporters of Pakistani religious party Jamat-e-Islami attend a rally against Raymond Allen Davis, a U.S. consulate employee suspected in a shooting, in Lahore, Pakistan, Tuesday, Feb. 15, 2011. Most legal experts in Pakistan's government believe an American detained in the killing of two Pakistanis has diplomatic immunity, but a court should decide his fate, an official said Tuesday. The announcement reflected an apparent bid to open the way to the man's release while dampening public outrage. (AP Photo/K.M. Chaudary) (AP)
--

(UPDATED) An expert who previously worked in a key State Department diplomatic affairs position is questioning the Obama administration's claim that Raymond Davis, the American currently imprisoned in Pakistan after killing two men, has diplomatic immunity.

A specialist in diplomatic law, Ron Mlotek served for 25 years as legal counsel at the State Department Office of Foreign Missions, which regulates foreign missions in the United States. In an interview with Salon, Mlotek said there remain crucial unanswered questions in the case, and that the question of Davis' immunity is not nearly as clear-cut as the administration has argued.

"On the basis of what has been publicly reported, it appears to me that the State Department is relying on legal smoke and mirrors," says Mlotek, who retired two years ago. In his former position, Mlotek dealt with many cases of alleged crimes by foreign representatives in the United States.

Davis was recently revealed to be a former Blackwater contractor working for the CIA in Pakistan, though it turns out those are not the most relevant facts when it comes to determining whether he has immunity.

Davis shot and killed two men in disputed circumstances while driving in the eastern city of Lahore last month; the U.S. maintains he acted in self-defense. An American vehicle that was dispatched from the "safe house" where Davis was living in Lahore then struck and killed a Pakistani bystander while rushing to the scene to pick up Davis. Subsequently, the wife of one of the slain men committed suicide. The case has sparked large protests in Pakistan.

Davis was arrested after the incident and has been held in Lahore while a court considers his claim of immunity. The Obama administration has argued that Davis' detainment is not permitted because he has full diplomatic immunity -- a position that, if he does enjoy such immunity, would be correct, according to Mlotek.

So the key questions are: How does one get full diplomatic immunity, and does Davis have it?

When a diplomatic officer (someone who works at the embassy) or a consular officer (someone who works at a consulate) is dispatched to a foreign country, the United States informs the so-called "receiving state" that the officer is arriving and describes his or her job at the embassy or consulate. The mode of official communication is known as a "diplomatic note." After getting the notification, the receiving state -- in this case Pakistan -- typically recognizes the person as a diplomatic officer or a consular officer and issues some kind of diplomatic ID card or notice of recognition.

Diplomatic officers who work at the embassy get absolute immunity, meaning, according to Mlotek, that they "could in theory pull out a gun and shoot down a family in cold blood and walk away and the foreign government could not lay a finger on them." But consular officers have a lesser class of immunity that covers only actions that are part of their official duties.

But, in a background briefing this week, an unnamed administration official seemed to claim that the U.S.informed Pakistan that Davis worked for the embassy in Islamabad and therefore that he has full immunity. The specifics of what the U.S. told Pakistan in 2010 are not clear. I've asked the State Department for more information on this and will update this post if I hear back.

Assuming what the administration is now claiming is true, there is a second set of potential flaws in the claim of full immunity, according to Mlotek. That is, if the U.S. informed Pakistan in 2010 that Davis was working at the Islamabad embassy, why was he actually working in Lahore?  Mlotek summarizes the potential problem:

"Suppose we not only lie about the fact that he's a spy, but we lie about the fact that he has anything to do with the embassy in Islamabad. And then, to top it all off, not only is he not in Islamabad, he's in Lahore. He's not even working in the premises of the consulate. He's working in a secret facility that we have not announced. The Vienna Convention specifically obligates the U.S. to tell Pakistan about where their premises are. And not only that, he's carrying a weapon -- we didn't tell the Pakistanis that," Mlotek says. "At what point do you say the diplomatic note was not valid?"

Mlotek also says a crucial concern when he worked at the Office of Foreign Missions was the "reciprocity angle."

"What if the other guys did the same thing here? Would the U.S. allow the Pakistani agent to go free?"

UPDATE: State Department spokeswoman Nicole Thompson tells me that the January 2010 diplomatic note regarding Davis will not be made publicly available. "We don't release diplomatic communications," she said.