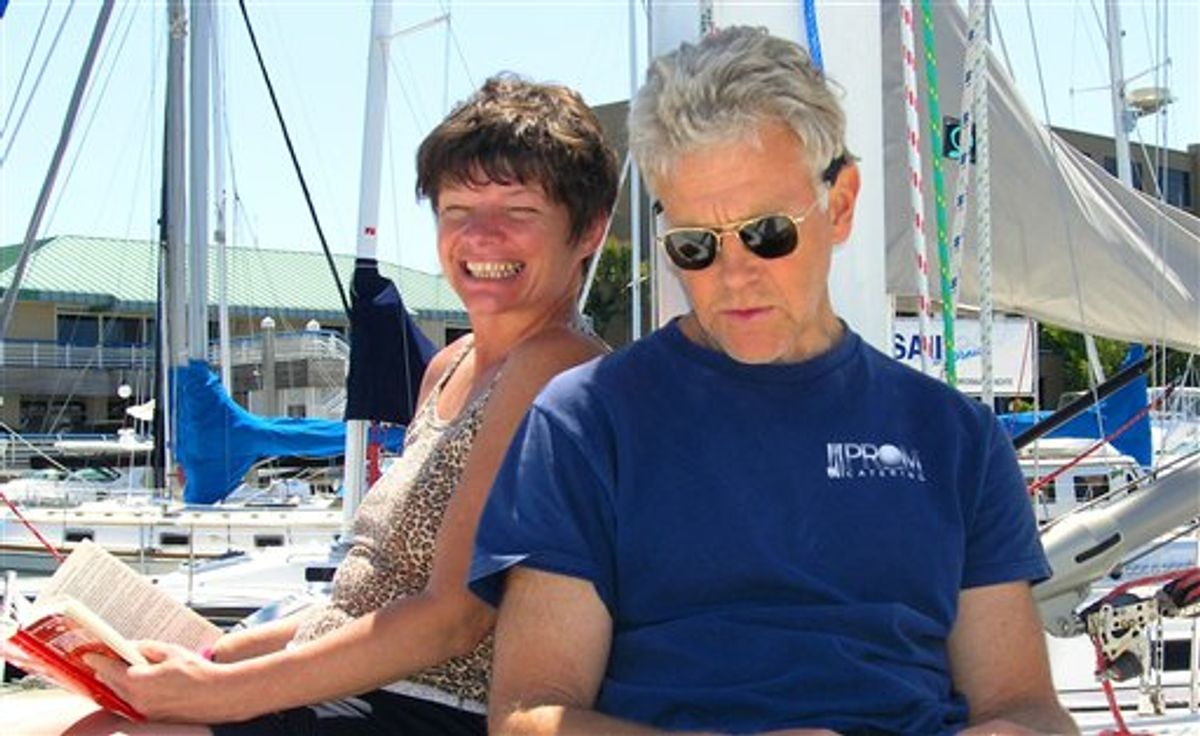 FILE - In this June 11, 2005 file photo provided by Joe Grande, Phyllis Macay and Bob Riggle are seen on a yacht in Bodega Bay, Calif. The U.S. military says Tuesday, Feb. 22, 2011 that pirates killed four American hostages they were holding on the yacht Quest off Somalia's coast. The victims are the Quest's owners, Scott and Jean Adam of California, and Macay and Riggle, both of Seattle. (AP Photo/Joe Grande, File) NO SALES (AP)
--

They were four adventure seekers who loved the sea and wanted to see the world. Friends said they were meticulous and planned for any dangers, but even that couldn't prepare them for the Somali pirates who stormed their yacht and took their lives.

The boat's owners, Jean and Scott Adam of Marina del Rey, along with Bob Riggle and Phyllis Macay of Seattle, were shot to death early Tuesday, after pirates took them hostage on Friday about several hundred miles south of Oman.

"I think she was smart enough and planned ahead and prepared to not be in this type of situation," she said, visibly shaken and holding back tears.

The Adams had been sailing full-time on their 58-foot yacht, the Quest, since December 2004 after retiring. They often travelled with friends, and on this trip were joined by Riggle and Macay.

Mariners were warned about traveling around the Horn of Africa because of the risk of pirate attacks. The four sailors traveled with a large flotilla to stay safe earlier in the trip, but left the group at the time of the attack, said Crossland.

The pirates shot the four after firing a rocket-propelled grenade at a U.S. warship, one of several vessels tracking the hijacked boat over the weekend. Fifteen men were captured.

Macay, 59, was wounded but alive when Navy SEALs boarded the Quest after the shooting, but she died later, her niece said.

Macay and Riggle had left Seattle on Riggle's sailboat for a world voyage in September 2007, but in recent years had been crewing on separate boats, said Macay's friend Cynthia Kirkham, of Seattle.

Joe Grande, a fellow member of the Seattle Singles Yacht Club, said the deaths were like losing family to those who knew the pair.

"Great sailors, good people. They were doing what they wanted to do, but that's small comfort in the face of this," Grande said.

The U.S. flag flew at half-staff Tuesday at the Del Rey Yacht Club in Marina del Rey, a small boat harbor on the Southern California coast where the Adams made their base.

Gary Deitsch, commodore of the club, said members were devastated by the killings. The couple had belonged to the club since 2001.

"We are deeply saddened," he said. "We hope their deaths will bring about the world's focus to eliminate this violence."

DeDe Allen, the club's secretary who was a friend of couple and had sailed with them, said they were last in Marina del Rey in December.

"They were just wonderful people to be with," Allen said. "Their personal mission was enjoying life."

Scott Adam, who was in his mid-60s, had been an associate producer in Hollywood when he became spiritual and enrolled in Fuller Theological Seminary in Pasadena a decade ago, said Robert K. Johnston, a professor at the seminary.

His wife had been a dentist, Torgerson said.

At St. Monica's Catholic Church in Santa Monica, where the Adams were parishioners and Jean Adam sang in the choir, Monsignor Lloyd Torgerson described the killings as heartbreaking during morning Mass.

The Adams took Bibles with them to distribute to far-flung corners of the world, he said.

"They were an extraordinary couple," Torgerson said. "They were joyful people."

Riggle was a relief veterinarian for the Seattle Animal Shelter for the past eight years or so, spaying and neutering adopted animals, said director Don Jordan.

"He wasn't a man of many words, but he was a kind-hearted individual with a great passion for animals and animal welfare," Jordan said.

Riggle once took a colleague's family sailing when their daughter was diagnosed with cancer to get their mind off their troubles. "That was just a small indicator about how he treated people," he said.

Macay was vice president for training and development for Profitability Consulting Group, an adviser to retail furniture stores based in Hillsborough, N.C. She and Riggle were romantically involved when they first met, but later were friends who sailed together, Kirkham said.

Profitability Consulting CEO John Eggers said Macay was regarded in the industry as one of the top educators and presenters on design and sales.

"She was such a free spirit," Eggers said. "She was just a real professional and just loved life."